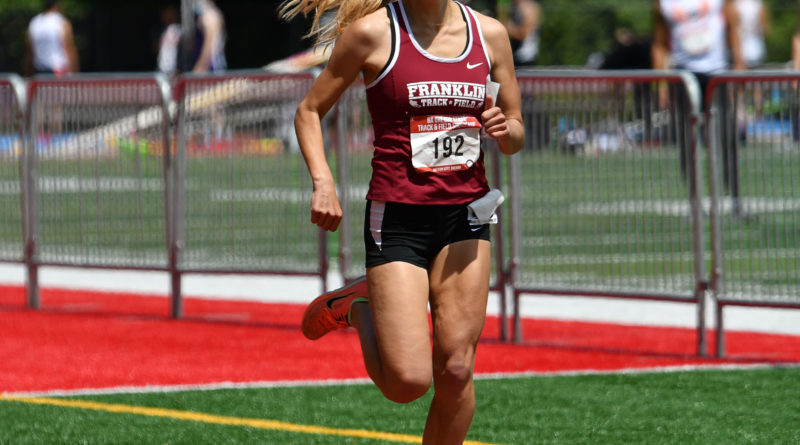 It was another win for Autumn Ost.

But this one was a little different, and maybe a little more special, for the Franklin senior.

That’s because, this time, she had to hold off her teammate to get the victory.

Ost, who triumphed in the 3,000-meter run on the first day of competition at the Oregon 6A Track and Field Showcase on Friday, came back Saturday to win the 1,500, with junior teammate Kaiya Robertson placing second, at the meet held at Pioneer Memorial Stadium in Oregon City.

“It’s fun for us, and we’ve been training together for such a long time,” Robertson added.

Ost won the race in a time of 4 minutes, 36.42 seconds, but she had to battle her way through the pack to get there. Ost was in 10th place with two laps to go. She battled her way to be side-by-side with Summit junior Teaghan Knox with a lap remaining. About 100 meters later, Ost claimed the lead and pulled away to win.

“I kept getting boxed in,” Ost said. “But I eventually got out of it, and we were coming in with about 400 to go, and I was just feeling strong enough to get into a sprint, and I hoped no one would catch me.”

Much to Ost’s relief, no one did.

“My teammate here has a pretty fast kick, so I was a little worried,” Ost said.

Robertson certainly did show a strong finishing kick. She passed Knox right before the finish line to take second place with a time of 4:38.44.

“It was good,” Robertson said. “Teagan and I were right there together at the end. I knew that, if Autumn was going to win, the only place I wanted to take was second.”

The one-two finish had both Franklin standouts smiling after the race.

“It was definitely hard. It was a stacked field, so that was fun,” said Ost, who definitely was pleased with her two victories. “The 3,000 is more tactical. The 1,500 was a complete unknown, so that was exciting. This is the first year where I’ve got the chance to race a few 1,500s, so I feel like I’ve been learning the distance.”

The 1,500 could be a big event for Robertson next year.