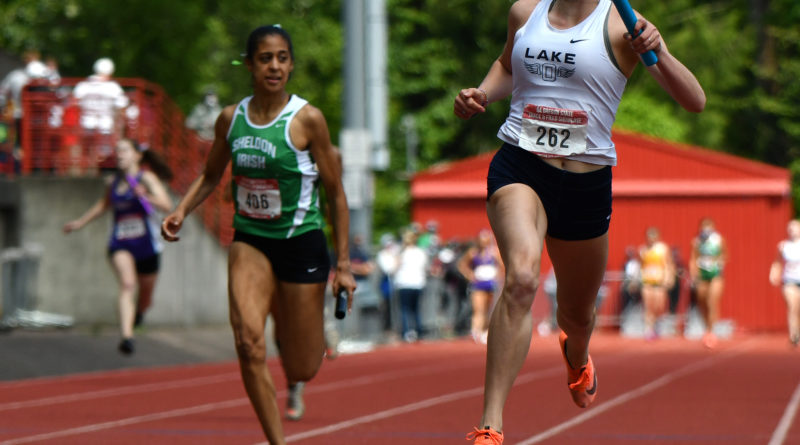 A lot of practice.

A little tweaking here and there.

And a new runner in the lineup.

The Lake Oswego girls 4×100 relay put that all together and came away with a championship performance.

The Lakers’ team of sophomore Chloe Collier, freshman Josie Donelson, junior Lauren DeGroot and freshman Mia Brahe-Pedersen sprinted to victory in a season-best time of 47.35 seconds at the Oregon 6A Track and Field Showcase, held Saturday at Pioneer Memorial Stadium in Oregon City.

“We’ve been working really hard for this all year, all season,” Brahe-Pedersen said during the team’s post-race celebration. “We’ve practiced constantly. We had some changes to the relays, but it came down to this team, and we’ve had a lot of success recently, which means a lot.”

“It’s just really amazing to be here,” said Collier, who ran the leadoff leg for the Lakers. “All season, we’ve had some falls, but we ultimately came back, and it’s just amazing to be state champs.”

While the team had been turning in strong times all season, the addition of DeGroot to the lineup might have been what turned things up a notch.

“I came in late to this team,” DeGroot said. “They were already first in state when I got here, so it’s just incredible to join in with this team.”

“Without Lauren, we couldn’t have done it,” Collier said.

In the race, Lake Oswego found itself in a tight battle with Sheldon and West Linn. But Brahe-Pedersen, running the anchor leg for the Lakers, pulled away to help clinch the victory.

“We’ve been working really hard, and there was a lot of good competition,” Brahe-Pedersen said. “We knew that if we didn’t get first, it would feel like a loss for us.”