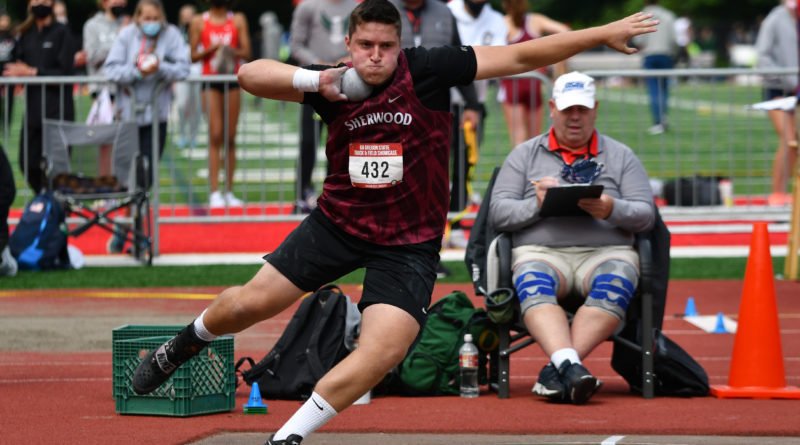 A year ago, as a Sherwood junior, Noah Culbertson had his sights set on winning a state title in the shot put.

With the 2020 spring sports season being canceled because of the COVID-19 pandemic, Culbertson saw that aspiration washed away.

He just pushed his goal one year, and, on Friday, he achieved it.

Culbertson claimed the title in the shot put event with a winning throw of 61 feet, 9 inches, at the Oregon 6A Track and Field Showcase at Pioneer Memorial Stadium in Oregon City.

“It means a lot. I hadn’t won before. I was trying to win last year, but, obviously, we didn’t have a season,” Culbertson said. “It feels good to win, so, yeah, it’s fun.”

Culbertson’s winning toss of 61-9 came on his third attempt in the preliminaries.

“It’s not bad. It’s definitely one of my best throws this season,” Culbertson said. “I wanted to get my PR (personal record of 62-5), but it was still fun to throw that.”

Not that he needed it, but Culbertson had plenty of extra motivation during Friday’s shot put event. A big part of that motivation came from his friend Bryan Cuthbertson, his Sherwood senior teammate.

Cuthbertson suffered an elbow injury during the spring football season but decided to keep competing this track season, throwing the shot put with his left (off) hand.

“It helps a lot having him here, for motivation,” Culbertson said. “He helps me push myself, and he’s cheering me on. It’s always fun to have a teammate there.”

Culbertson, who has signed to compete for the University of Idaho track and field team next year, also was motivated by watching another senior teammate, Asher Krauel, win the javelin event earlier in the day.

“I was right there,” Culbertson said. “Watching his first throw got me hyped up. It was really fun.”

And, of course, Culbertson wanted to do all he could to help the Sherwood boys squad in its quest for the team title.

“We have big goals. We’re trying to win state,” Culbertson said. “We thought we had a pretty good chance last year, and we still have a good chance this year. People are stepping up.”

Sandy senior Tanner Brewster finished second in the shot put with a mark of 52-0. McKay senior Brian Coburn was third at 51-8. Cuthbertson finished fourth with a throw of 49-2.5.