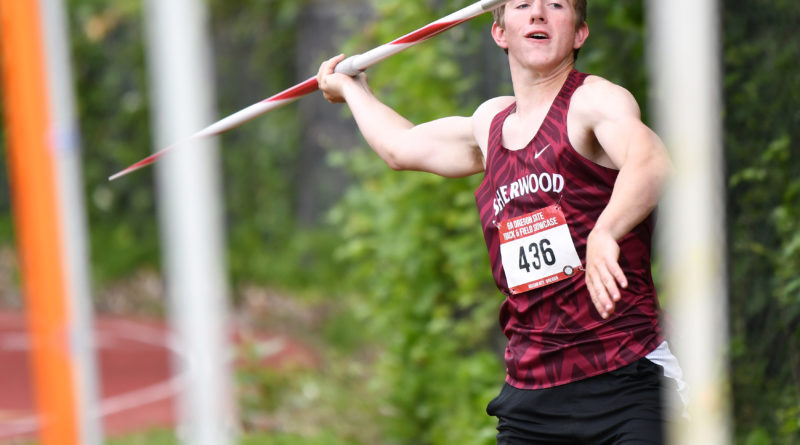 Krauel, a Sherwood senior, got off to a roaring start in the boys javelin event, launching a throw of 198 feet, 7 inches, in his first throw of the competition. Krauel then rode that opening throw to victory at the Oregon 6A Track and Field Showcase on Friday at Pioneer Memorial Stadium in Oregon City.

“I’ve been kind of looking at this moment since freshman year,” Krauel said of the title. “I knew it was a possibility. I knew I had what it takes to throw that far. I was super amped today.”

Being ‘super amped’ paid off with that first — and winning — throw.

“I had a lot of adrenaline, a lot of energy going,” Krauel said of his opening toss. “I peaked right there, at the right moment. I knew it was pretty good. I was really excited. I was proud of myself.”

The big throw — coming while, for the first time in competition, using a javelin that once belonged to former Gresham High School and University of Oregon standout Sam Crouser — not only gave Krauel the title, but also a school record.

“My good friend, Bryan (Cuthbertson), had it at 197, and then I got it today,” Krauel said. “It’s pretty special, and I’m excited about it. We’ve got some good throwers at Sherwood.”

The Bowmen also boast a team title contending squad this year, something else that motivated Krauel.

“We’re excited to see how the rest of this plays out,” Krauel said. “I have a lot of confidence in our team.”

Oregon City senior Logan Peyton finished in second place in the javelin competition with a mark of 192-2, and Krauel’s Sherwood teammate, sophomore Austin Milton, was third at 189-9.

“I’m really proud of him,” Krauel said of Milton. “He’s just a sophomore, so my school record is in jeopardy.”