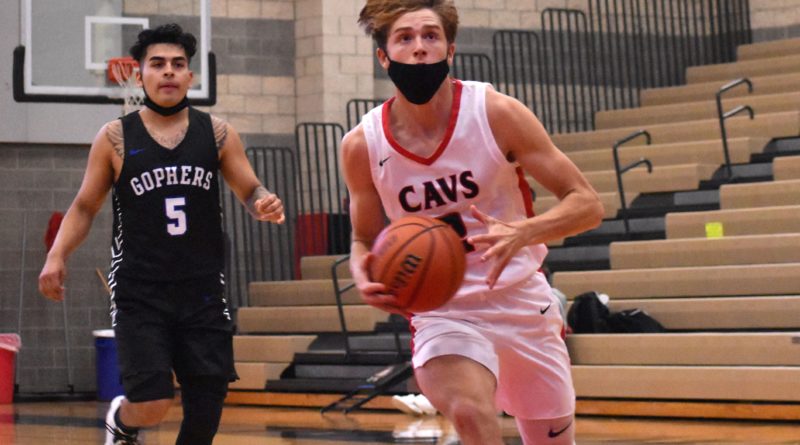 CLACKAMAS — The Clackamas boys basketball team built a big early lead Wednesday night and never trailed in a 64-57 win over Gresham in an early-season clash of Mt. Hood Conference contenders.

Ryan Lewis hit a step-back three-pointer from in front of the Gophers’ bench, and teammate Damon Erickson knocked down two free throws after being fouled on a drive through the lane to put the Cavaliers up 17-8 at the end of the first quarter.

“We have to find a way to get off to a better start,” Gresham coach Erik Lyslo said.

The lead expanded to 14 points, the largest of the night, midway through the second quarter when Erickson put on a spin move in the lane and converted a layup out of a crowd.

“We were attacking the basket at all costs, and we were either finding teammates at the rim or we were getting fouled,” Erickson said.

The Gophers rallied late in the first half, getting a series of baskets in the paint from Gabe Teeny. Gresham cut the margin to 33-29 at intermission when Esyah Pippa-White drove the length of the court and drew contact at the front of the basket, putting a layup over the top of a taller defender.

Clackamas roared out of the halftime break and quickly reestablished a double-digit lead.

K.J. Horsley swatted a ball loose on the defensive end and in the same motion looped an underhand feed ahead to Lewis, who beat everyone down the floor for a layup. Levi Simmonds drilled a three-pointer, and Erickson bolted around a screen in the high post and got loose for a layup.

“We had to play with poise and trust in each other,” Erickson said.

The Cavaliers retained their lead late in the quarter when Reid Gray skied high for an offensive rebound and before his feet touched the floor, he sent a wrap-around pass through the lane to feed Erickson for an easy two.

Horsley bothered Gresham’s backcourt most of the night, preventing the Gophers from getting out on the run consistently.

“We knew that Elijah (Munyan) and Esyah like to get downhill, so we worked hard not to let them get the corner and take off for those layups,” Horsley said.

Holding for the final shot of the third quarter, Pippa-White retreated behind the arc with 10 seconds left, then used a shake-and-bake move to get to the rim for a layup that trimmed the Cavaliers’ lead to 48-41 heading to the fourth.

The Gophers missed a couple of three-point attempts that would have made it a one-point game down the stretch before R.J. Alexander came off the bench and hit a long ball that made it a one-possession game with 1:01 to play.

The ball got poked loose on the Cavaliers’ next trip down the floor, but it ended up in the hands of Lewis, who was cutting along the baseline under the basket. He was left with a close-range finish to put Clackamas up 60-55 with 38 seconds left.

Gresham would never get a chance to pull even.

“We knew Gresham would keep coming hard at us, we just had to execute well and move the ball,” Horsley said. “We had that early lead, and that gave us the confidence to finish.”

The Cavaliers finished the game at the free throw line, led by Erickson, who went 5 for 6 down the stretch. Clackamas shot 23 for 26 (88.5 percent) and outscored the Gophers by 11 points at the stripe.

“It was the little things tonight,” Lyslo said. “There was a big discrepancy at the free throw line. They attacked the basket more than we did and got those easy points.”

Erickson led the Cavaliers with 20 points, and Izzy Baker added 15. Pippa-White had 20 for Gresham, and Munyan added 15.

“This was a big one. I was really happy with how many guys came in and made winning basketball plays,” Clackamas coach Cameron Mitchell said. “Seeing the joy out there on the court is really cool — you feel normal, at least for a while.”

Clackamas boys basketball a team to beat in Mt. Hood Conference — even with Ben Gregg at Gonzaga

With a new gym and several key returners, Gresham boys basketball looks to move up the Mt. Hood standings