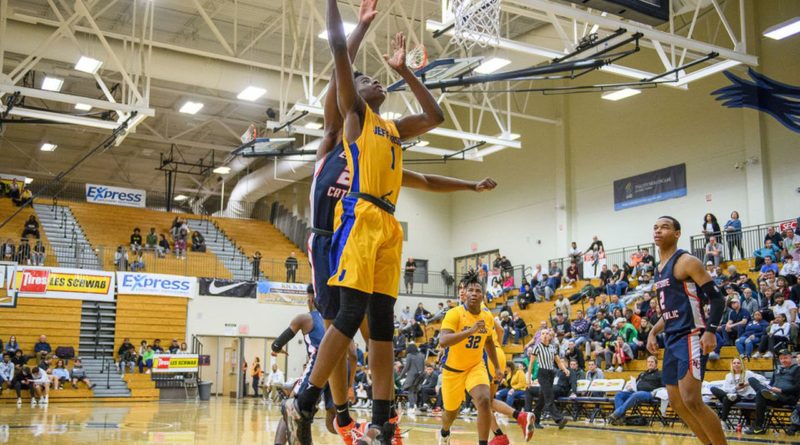 Over the next two weeks, SBLive Oregon will break down more than 100 Oregon high school basketball teams. Here’s our look at the Jefferson Democrats boys of the Class 6A Portland Interscholastic League.

One of the state’s top prospects in recent memory, Cook is a five-star recruit with a host of high-major offers. Cook, a first-team all-PIL selection as a freshman, will play for AZ Compass Prep in Chandler, Arizona, next season. “Watching him in practice, it’s just like, ‘Wow!’” Strickland said. “I’m just sitting here with my mouth open. His athleticism, the way he shoots the ball, and he’s a great teammate and a great kid. He is looking like the next big slice coming out of Oregon.”

Washington is a physical, left-handed junior guard who will be joining Cook next season at AZ Compass Prep. A four-star football prospect, Washington could play football or basketball at the next level. “Lamar has trimmed down his baby fat and he is chiseled,” Strickland said. “He reminds me of James Harden on offense, just the way he can shoot the deep ball and get into the paint. He has wiggle, he’s strong and tough, and he’s not just a gunner.”

A transfer from Roosevelt, Hopson is a versatile offensive player who will give the Democrats another scoring option. Hopson attended Jefferson as a freshman and Strickland said he is popular with his teammates. “Brandon’s game is very fluid,” Strickland said. “We are going to challenge him to do it on both ends of the floor, and we will need him to focus on the (defensive) end. But he will bring a nice little scoring punch for us.”

A four-star defensive back, Williams committed to Oregon in March. The football star also is a standout basketball player who will add depth to Jefferson’s backcourt. “Trejon’ is one of the best athletes in the state, hands down,” Strickland said. “He came into high school as the best eighth-grader and I think he can bring it on the basketball court as well. He’s a great defender with toughness who can get into the lane.”

Younger brother of former Gonzaga guard Silas Melson, Sanborne Melson had a productive winter on the football field and is running track. Strickland said Melson is coming along nicely as a sophomore and is ready for the varsity team. “We are looking for him to step right in and fill in some of those guard roles,” Strickland said. “He can really shoot it from deep. Not quite like his brother yet, but it’s coming.”

Strickland’s teams always seem to reload rather than rebuild, and that is once again the case this spring. The 2021 Democrats won’t be as big after the losses of Kamron Robinson (transferred to Desert Pines in Nevada) and 6A state player of the year Nate Rawlins-Kibonge (enrolled early at Oklahoma for football), but the program is oozing with talent at the guard position.

Strickland said Cook, Hopson, Melson and Washington have been playing almost nonstop out of state since the start of the pandemic. On the other end, the team has multiple football players who went months without doing much basketball-wise.

“A lot of them were sitting around and hadn’t touched a basketball and it has been showing,” Strickland said. “Things have been sloppy and sluggish. It is what it is. But the guys are excited, and I’m excited.”

It will be a bittersweet season for Strickland as Cook and Washington soon will be headed off to AZ Compass Prep, one of the top high school teams in the nation. A few Democrats have transferred out of state over the years, and Strickland is thrilled to see Portland kids compete at an elite level.

“Whenever guys have opportunities to achieve their dreams, I’m always happy for them,” Strickland said. “I’d also like to think we can provide what they need here.”

Jefferson has won five state titles under Strickland, the most recent coming in 2017. The Democrats placed second at the past two completed state tournaments and were the heavy favorite to get back on top a season ago.

There will be no traditional state champion this spring, but that won’t stop Jefferson from competing to be Oregon’s best team.

“We’re just trying to get the guys out there and let them have some fun,” Strickland said. “Hopefully they play hard and take it game by game, and at the end we can call ourselves the paper champions.”

“I have an idea in my head of what I want the team to be, and whether we get there or not remains to be seen. We have a lot of toughness coming back and I would like our M.O. to be defense. Defense, rebounding and all those tough, grinder things that help you become a championship-caliber team.” — Pat Strickland