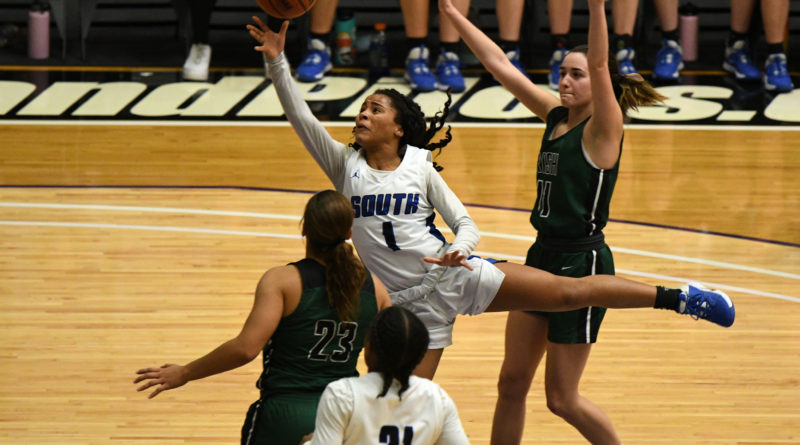 Over the next two weeks, SBLive Oregon will break down more than 100 Oregon high school basketball teams. Here’s our look at the South Medford Panthers girls of the Class 6A Southwest Conference.

The younger sister of Ula Chamberlin, the school’s all-time leading scorer, has made her own mark on the program, earning SWC co-player of the year honors and making the all-state second team as a junior, averaging 13.4 points and 5.1 rebounds per game. She has signed with McNeese State of the Southland Conference.

A top on-ball defender who made the all-SWC first team and received all-state honorable mention, Coleman averaged 10.8 points, 3.9 steals and 2.7 rebounds per game last season. She has signed with Chico State in California.

Schmerbach is another strong on-ball defender who earned second-team all-SWC honors coming off the bench as a junior. She has committed to Linfield.

A second-team all-SWC selection for the Panthers last season as part of their four-guard starting lineup, Stone will play next season for UC Santa Cruz.

Logue rounded out the starting lineup last season, providing an inside presence the team otherwise lacked — she had eight rebounds and four blocked shots in South Medford’s state quarterfinal win over Sheldon. She earned second-team all-SWC honors and has drawn attention from several Division I schools.

An undersized post who made the occasional start as a junior, the all-SWC honorable mention selection plays with a rugged style that belies her size. “She possesses a versatile game with length and unique athleticism,” Cole said.

If there were any team poised to challenge Beaverton for the state title last season, it was South Medford, which won an eighth SWC championship in the past 10 years and 16 consecutive games to close the season before the pandemic shut down the state tournament ahead of a highly anticipated semifinal against South Salem.

The Panthers would have been on the short list of title contenders again this season, returning all but one player from that squad — Pedrojetti, who is now at Eastern Washington — and adding two players who will be among the state’s best the next three seasons.

Sophomore Donovyn Hunter was a 5-11 point guard who started on the Cal Stars Elite Nike EYBL club before suffering an ACL injury that sidelined her last season, and 6-1 freshman Kim Ceron has the athleticism and length to realize her immense potential.

They join a core group of seniors (the largest senior class in Cole’s 14 seasons) led by Chamberlin, the latest D-1 signee from the program, and three others who have committed to play collegiately.

Besides the seven returning all-SWC selections, two wings who swung between JV and varsity — sophomores Kendall Fealey and Tatum Schmerbach — have improved dramatically and will add depth to the varsity squad.

“While proud of our season last year, we definitely felt let down by the way it ended. We felt like we were capable of winning the state championship, and we would like to compete for a state championship again this season.” — Tom Cole