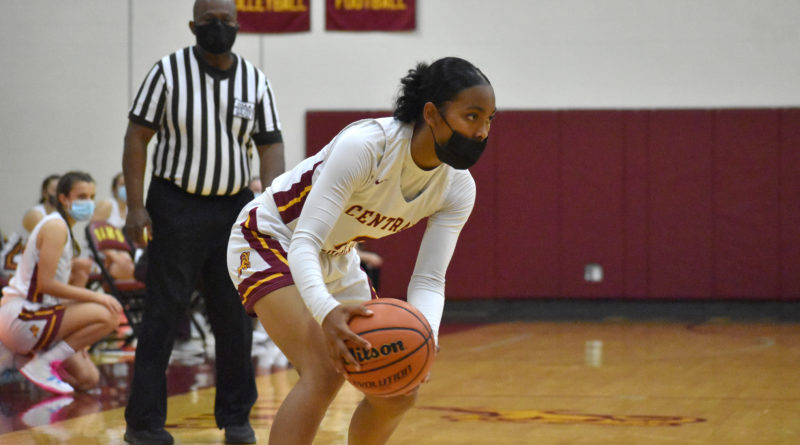 PORTLAND — Central Catholic got a boost from an unlikely hero down the stretch Monday night to slip past Barlow 59-55 to open the girls basketball season.

The battle between last season’s two top teams in the Mt. Hood Conference saw four lead changes in the final minutes. The visiting Bruins took their first lead of the second half after Maicee Bradley scored in the paint.

The Bruins regained possession and called a quick timeout.

Coming out of the break, Barlow worked the ball around the perimeter and took 90 seconds off the clock.

That’s when Central Catholic freshman Jayda Jackson pounced, diving into the passing lane and racing the other way. She ran out of room at the baseline when she twisted toward the hoop and put a short shot over the side of the rim for a three-point play.

“I was watching the ball and saw plenty of chances,” Jackson said. “Finally, I saw the ball getting passed, and I just went for it. I knew I had a bigger player on me, so it took a lot of aggressiveness and not being scared to finish.”

“It’s a tough balance between running the clock and knowing when to attack — it’s a learning experience,” Barlow coach Nick Hudson said.

The Bruins weren’t finished yet.

Melanie Hiu tied up the ball to force a turnover on the alternating possession, and teammate Lindsay Barden stepped through two defenders for a go-ahead layup as the clock ticked under a minute.

Central Catholic quickly put the ball back in play, and Jackson wasted no time attacking the hoop, getting off a short shot that bounced on the rim twice before falling through the net to put the Rams up one with 38 seconds to play.

“I was in the groove and when you believe something will happen — it will happen,” Jackson said.

Central Catholic sealed the win at the free throw line, where Payton Allen went 5 for 6 down the stretch.

“We needed to keep playing hard, but we knew we could finish the game if we knocked down shots and were smart with the ball,” Allen said.

Allen and Gretta Baker shared the scoring lead for the Rams with 13 points apiece, while Hiu and Annie Koenig paced the Bruins also with 13 points.

Barlow started fast with Barden cutting across the lane for a layup and an early four-point lead. The Bruins sank four three-pointers and ended the first quarter up 17-12.

“When we get motion, move the ball quickly and come off screens, we’re able to get some good looks,” Hudson said. “Central did a good job making adjustments to that.”

Yasmin Woodard buried a corner three-pointer to give the Rams their first lead early in the second quarter. Central Catholic expanded to its biggest lead at 31-23 late in the first half when Baker swished a deep ball from a full stride behind the arc. She repeated the task with a hand in her face on the team’s next trip down the floor.

“We started off slow, but our chemistry started to pick up and we took off from there,” Baker said.

The Rams held a 49-43 lead early in the fourth quarter when Allen snagged a rebound and fired a deep pass on target to Carly Hicks for a layup at the other end.

Barlow pulled even a minute later on back-to-back drives by Barden, followed by Hiu beating her defender off the dribble for a layup to set up the game’s wild finish.

Central Catholic plays a nonleague game at Liberty on Wednesday night, while Barlow is at Reynolds.

Central Catholic girls basketball has no seniors, several holes to fill … but ‘we will still be doing what we do’