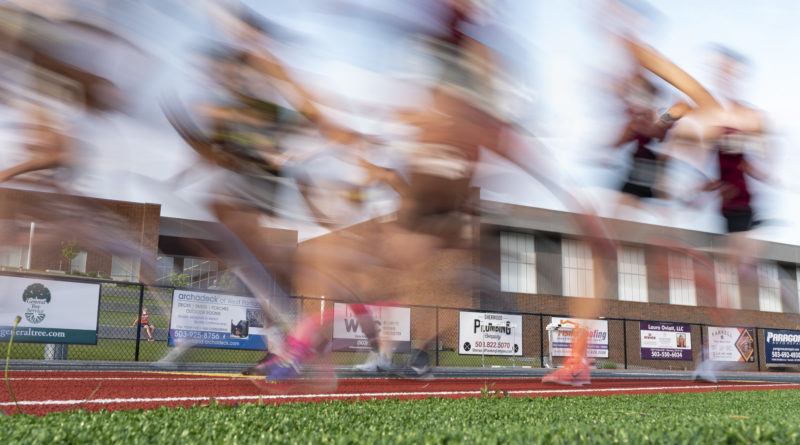 Brahe-Pedersen won the title in a blazing 23.70 seconds, just one-hundredth behind Kellie Schueler’s 2009 mark for Summit and less than a second behind Margaret Johnson-Bailes’ all-time best of 22.95 for Churchill in 1968.

Chasing after Brahe-Pederson, Oregon City sophomore Sophia Beckmon ran the fifth-fastest 200 in state history, finishing second in 24.11, while West Linn junior Olivia Iverson moved into the top 25 all-time with her third-place run of 24.68.

Brahe-Pedersen also anchored the Lakers’ 4×100 relay to the ninth-fastest time in state history, teaming with Chloe Collier, Josie Donelson and Lauren DeGroot to win the title in 47.63.

Daniel and Beckmon also combined with Samara Lugo and Grace Leasure to win the 4×400 relay in 3:53.09, putting them No. 11 on the all-time list.

Across the mountains in Madras, Gladstone junior DeShanae Norman became the ninth girl in state history to clear 5 feet, 10 inches, in the high jump in winning the Tri-Valley district title. She and Cascade junior Emma Gates, who leads the state with a 5-11 clearance, will meet at next week’s 4A Track and Field Showcase meet at Siuslaw High School in Florence.

Earlier in the week, Jesuit junior Chloe Foerster moved to No. 8 on the all-time list in the 1,500 with a 4:26.06 run at a Metro League dual meet against Beaverton on May 13.

A day later at a Cowapa League dual meet at Astoria, Fishermen junior Colton McMaster moved into second place on the all-time 4A leaders list in the boys discus with a throw of 192-10 — good for No. 12 on the all-time state list.

Check out the all-time Oregon top-50 lists by event