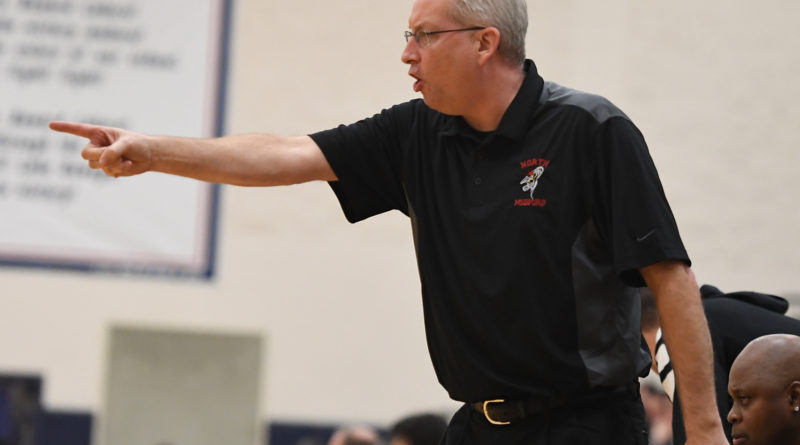 Over the next two weeks, SBLive Oregon will break down more than 100 Oregon high school basketball teams. Here’s our look at the North Medford Black Tornado boys of the Class 6A Southwest Conference.

Playoffs: Lost 57-53 to Oregon City in first round

The first-team all-Southwest point guard averaged 11 points and three assists per game as a junior while proving a solid defender. “He has a solid mid-range game, with great slashing ability and the ability to finish at the rim,” Plankenhorn said. “He’s working to stretch his game to the three-point line.”

Karrick last season made 45 three-pointers and shot 31 percent from beyond the arc, averaging 10 points, two rebounds and 1.5 assists per game in earning second-team all-Southwest honors. Plankenhorn described him as a “wing shooter who has the ability to get to the hoop if you crowd him.”

Dyer can play in the post or on the perimeter, averaging six points, 9.4 rebounds and two assists per game as a sophomore and receiving all-SWC honorable mention. “Bryce is a great rebounder with a motor and mind to chase down the ball,” Plankenhorn said. “He has the ability to score inside and outside depending on how the defense covers him.”

Neff was a sharpshooter off the bench as a sophomore, making 41 percent of his attempts from beyond the arc and averaging 5.6 points per game. Plankenhorn praised his offseason work in becoming a scorer at all three levels. “He will be a very difficult guard this season,” Plankenhorn said.

The Black Tornado graduated Carpenter, the team’s leading scorer who earned conference co-player of the year honors before heading to Eastern Washington to play football, as well as two other all-SWC honorees. Still, Plankenhorn was optimistic that a deep group of juniors could jell around his senior backcourt of Ellis and Karrick to keep them in the hunt for a conference title.

Instead, he’ll push them “to play the game the way we want it to look, playing fast and smart while defending to make things difficult for the other team.” He’ll give long looks to post players such as 6-4 junior Connor Goodrich and 6-1 junior Brandon Dominguez, who both swung between JV and varsity last season, to complement Dyer inside.

Several other juniors, including 6-2 post O’Shea Miller and guards Clayton Folletti and Austin McLean, will vie for playing time as roles get settled for the 2021-22 season.

“Both Clayton and Austin can rebound and stretch the floor by being able to make threes,” Plankenhorn said.

“To just get a full six-week season in with all 14 games played will be the main goal. I am excited about this group and was looking forward to the upcoming year, so now I just would like to get a chance to see these kids play together.” — Scott Plankenhorn