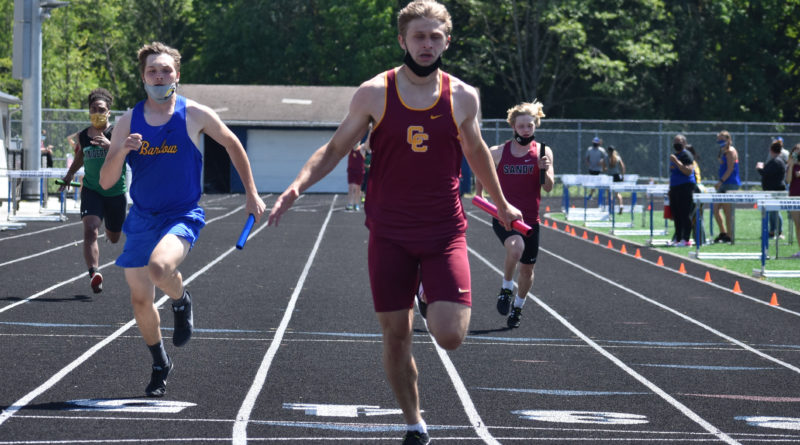 Featured photo: Central Catholic’s Greg Neal comes through the finish line first to complete a comeback win for the Rams in the 400-meter relay.

GRESHAM — It was a battle of the loaded lineups at the Mt. Hood Conference district track and field championships hosted by Barlow High on Saturday.

The Sandy boys loaded up in the throwing events, starting with Nick Olsen, Elias Martinez and Tanner Brewster combining for a sweep in the shot put. Olsen had the top five throws of the competition, all going more than 50 feet, highlighted by his winning throw and personal best of 53 feet, 5 inches.

“I was hitting around the 55 line during practice leading up to the meet, so I came into today with a lot of confidence,” Olsen said. “I have to give a shout out to my coaches — they are the ones who brought me to where I am.”

The Pioneers moved to the infield and saw Brewster, Olsen and Lander Marak put together another 1-2-3 finish in the discus. This time, Brewster had the five best marks of the event, winning with a personal-best throw of 156-8.

Brewster rounded out the throws with a win in the javelin with a heave of 175-5 — edging Benjamin Moffett of Clackamas by about a shoe length.

The Pioneers totaled 62 points across the three throwing events. Through the early afternoon’s field events, Sandy was more than 30 points clear of the field — 71 points ahead of its biggest threat in Central Catholic.

“They rely on us pretty heavily for points, especially now that we’re seniors,” Olsen said. “I like throwing under pressure — that’s just my thing.”

Olsen is signed to play football at Linfield in the fall.

With the field events in the books it was time for Central Catholic to shine on the track, where the Rams won 9 of the 10 races.

Central Catholic got started fast with a come-from-behind victory in the 400-meter relay. Barlow found itself out in front by a stride coming off the final turn, but a bobbled hand-off opened the door for Rams anchor Greg Neal to dash into the lead.

“I knew I had to go hard, but I saw the opportunity,” Neal said.

He quickly moved to the front of the pack and sprinted away the final 80 meters to clock in with a winning time of 44.65 seconds.

“That’s my first time having to come from behind like that — it felt really good,” Neal said.

The Rams followed by filling three of the top four spots in the 1,500 with Wes Shipsey winning in 4:05.74. He and teammate Max Girardet were joined by Barlow’s Parker Waugh in the lead pack through the first half of the race before pulling away over the final two laps.

“We planned to go out at a pretty relaxed pace and hammer it hard over the last 800,” Shipsey said. “Max and I have raced side-by-side since cross country, and we just trust the process.”

The Rams added a 1-2 finish by Stryder Todd-Fields (11.18) and Xavier Simpson in the 100. Teammate Liam Shores dominated the 400 (49.57), making up the stagger on lanes 5 and 6 on the opening turn. He was alone far ahead of the pack entering the final straightaway and won by more than two seconds.

Central Catholic finished with 174 points. Barlow was second with 107 and Sandy came in third with 106.

Barlow sophomore Micah Perry flew down the runway in the high hurdles, leaning through the finish line and taking two excited hops into the air. He won in 14.88 seconds — putting him fourth on Barlow’s all-time list.

“Going sub-15 has been my goal all season,” Perry said. “After the second hurdle, I felt myself just take off. I’m learning to enjoy getting out there by myself where I don’t have to worry about anyone else.”

Also picking up wins were Clackamas’ Ryan Lewis in the high jump (6-0), Barlow’s Dakota Pillster in the long jump (19-7), Reynolds’ Brandon Jensen in the pole vault (10-6) and Clackamas’ Vanndon Heard in the triple jump (38-5).

Barlow went start-to-finish to win the girls meet with 156 points, while Central Catholic came in second with 131 and Clackamas was third with 106.

Senior Reanna Maroon got the Bruins off to a strong start by breaking the school record twice on her way to a win in the pole vault. She put together a series of first-attempt clearances to get over the bar at a record 11 feet, 10 inches, and advanced the mark with a second-try clearance at 12-2.

“I came into today going 11-9 during the indoor season, so I was really shooting for 11-10 today,” Maroon said. “I had a pretty good feeling coming down the runway. I’ve wanted that school record for awhile, so I was excited and relieved when I got it.”

The Bruins also got wins from Allie Perez in the triple jump (30-10.5) and Alina Estrada in the high jump (4-10). The Bruins bolstered their team score by picking up second-place points across five events, led by Estrada with runner-up finishes in both hurdles races.

Central Catholic narrowed the gap in the team score by winning 6 of the 10 races, piling up 52 points across the three distance races. Freshman Ella McGillis led start-to-finish in the 800 (2:23.22), while teammate Abigail Kim moved up a spot in the final lap to take third place.