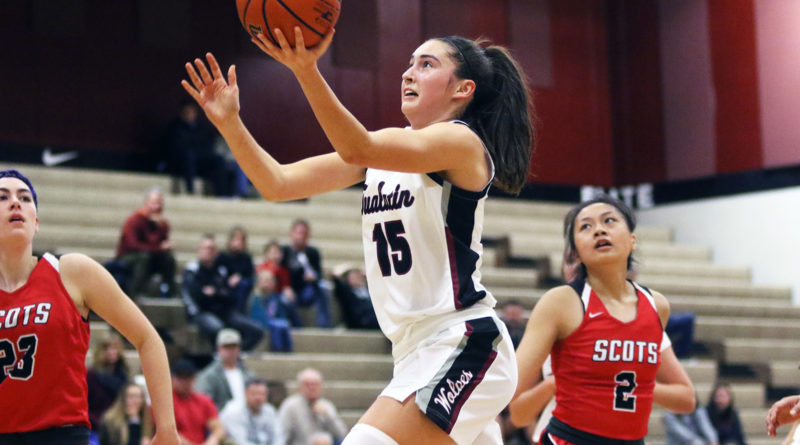 Over the next two weeks, SBLive Oregon will break down more than 100 Oregon high school basketball teams. Here’s our look at the Tualatin Timberwolves girls of the Class 6A Three Rivers League.

A first-team all-TRL pick as a junior, Lathrop averaged 16.6 points, 9.3 rebounds and four blocks per game last season. The 6-foot-3 post is one of the state’s top players regardless of position and will play college basketball for Nevada. “She’s a scoring machine,” Pappas said. “She is always attacking and has strong post skills and a motor.”

Dering, a second-team all-TRL selection as a junior, is another Division I athlete. The 5-foot-11 senior averaged 8.2 points and 5.2 rebounds last season and has signed with Kent State for lacrosse. “She is a strong vocal leader and extremely competitive,” Pappas said. “She is all about doing the dirty work. She can score it and is a strong passer.”

Javernick put up 6.1 points, 3.7 rebounds and 2.4 assists per game a season ago and has become a lights-out shooter, Pappas said. The Pacific Lutheran-bound guard earned all-TRL honorable mention as a junior. “She is a great ball-handler and distributor,” Pappas said. “She’s underrated in my opinion and will be even better than she was during a very good junior year.”

Poulivaati missed her freshman season with a knee injury but is slated to be a difference-maker for the Timberwolves. Pappas called Poulivaati the team’s secret weapon. “Olivia is crazy athletic and is a tremendous passer who can really shoot it,” Pappas added.

Searle played her way into the starting lineup as a freshman and is another sophomore loaded with potential. “Her length makes her a nightmare on defense for opposing teams to play against,” Pappas said. “She is also a three-level scorer on offense.”

One of the state’s top shooters, Davis knocked down 45.7 percent of her shots from beyond the arc last season. She is a strong defender and rebounder who will play college basketball for Carleton College. “She is one of the hardest working and most coachable kids I have ever coached in my 19 years,” Pappas said. “She figures to have a huge year.”

If any team can challenge West Linn in the Three Rivers, it will almost certainly be Tualatin. The Timberwolves return seven of their top eight rotation players from last season’s team that won 19 games and hung tough against Southridge in the second round of the 6A state playoffs.

“We are very excited for this year,” said Pappas, who came to Tualatin after six seasons at Sherwood. “We feel that this is our time, and we hope the state allows for a state championship this year because that’s what we want to go after.”

It all starts with Lathrop, who is much more than just a scorer. In a game last season against St. Mary’s Academy, Lathrop posted a triple-double with 35 points, 18 rebounds and 10 blocks. Davis, Dering, Javernick and Searle also are returning starters, and guards Teagan Gaviola and Brook Burke, a junior who brings instant energy and has improved her scoring ability, are experienced rotation players.

“You add all that up, and this is the second year of our players learning our system, we’ve got the entire core of the team back and we add Poulivaati, who is this phenomenal athlete who was on the shelf all season,” Pappas said. “So, we are feeling pretty good heading into this season.”

Defending TRL champion West Linn remains the favorite to repeat, but Tualatin has all of the ingredients to be a worthy challenger. Pappas just wants the Timberwolves to get an opportunity to do something special.

“We have tremendous respect for so many of the teams in our league,” Pappas said. “Clearly, we know that any talk of top teams in the state would definitely include West Linn. Oregon City and St. Mary’s are extremely talented as well.

“It’ll be a fight. The excitement is palpable in our gym, and after such a long layoff, we are so ready to get out there and compete.”

“We have so many strengths, but out of all of those, I would say the No. 1 strength would be that we are led by five amazing seniors. Lathrop, Dering, Javernick, Davis and Gaviola are such a special group. They truly care about each other and are so dedicated to this team and this program. I literally have to kick them out of the gym most nights because they would just stay and shoot or work out forever.” — Wes Pappas