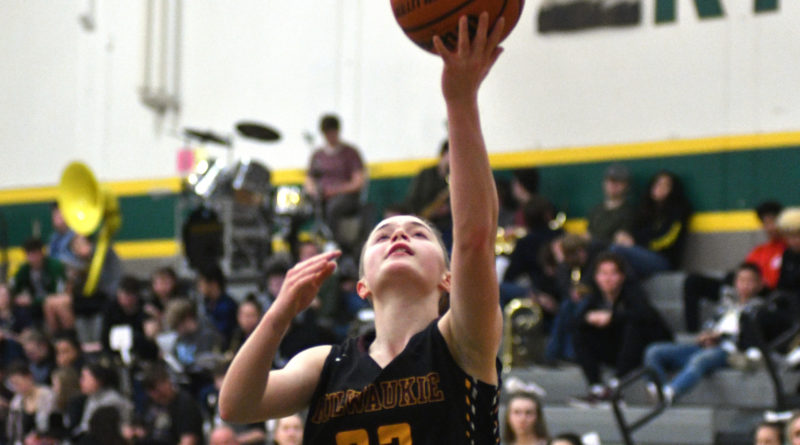 Over the next two weeks, SBLive Oregon will break down more than 100 Oregon high school basketball teams. Here’s our look at the Milwaukie Mustangs girls of the Class 5A Northwest Oregon Conference.

Denson is coming off a spectacular sophomore season, when she averaged 30 points per game in earning first-team all-Northwest Oregon Conference honors and Class 5A all-state honorable mention. “I haven’t seen a point guard play at that level,” White said. “It doesn’t matter what kind of defense other teams play against her, box-and-one or whatever, she can score, or create scoring opportunities, against anyone. She’s super slippery.”

Welch is a transfer from Oregon City, where she was a second-team all-Three Rivers League pick last year. “She can shoot from anywhere, she runs the floor well, and she can touch the rim,” White said. “Her hope is that she can dunk in a game this year.” Welch also should provide some strong athleticism for the Mustangs. “She’s a great athlete,” White said. “I told her, ‘If you were my kid, I’d let you play football.’”

Wood, a transfer from Molalla, should receive action at point guard and shooting guard for Milwaukie this season. “She can shoot from anywhere, and she has great court vision,” White said.

Manselle is a transfer from St. Mary’s Academy. “She’s one of those kids who dives for and gets every loose ball,” White said. “And she also can shoot from anywhere.”

The Mustangs missed qualifying for the playoffs last year, but they’re brimming with confidence this season.

“I feel like this is the year where we’d go from not making the playoffs to feeling like we should be favored to win the whole thing,” White said. “That’s our goal — what we’re talking about is winning the prize. We’re looking at this like it’s us vs. the world.”

The Mustangs know what they will turn to this year to reach those lofty goals.

“Our strengths are our shooting and defense,” White said. “We’re ‘3 and D.’ We have a lot of girls who can really shoot, and the younger kids are strong on defense. They’re super solid athletes.”

“I feel like this team is like a bunch of sisters. They all know each other. Our motto is, ‘(friend)ship equals (champion)ship.’” — Michael White