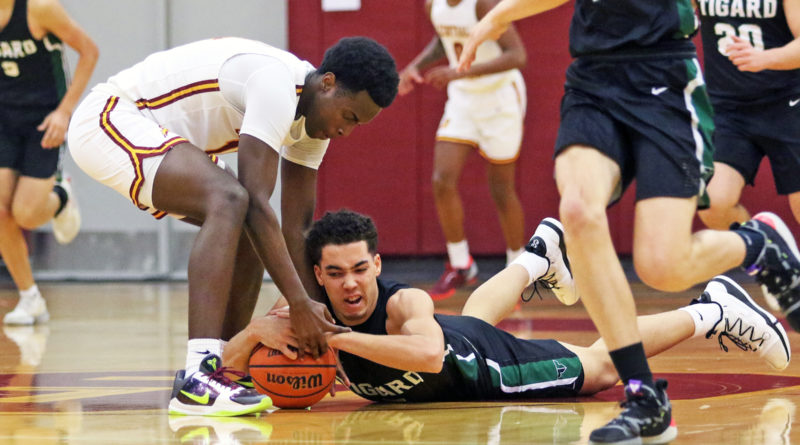 Over the next two weeks, SBLive Oregon will break down more than 100 Oregon high school basketball teams. Here’s our look at the Central Catholic Rams boys of the Class 6A Mt. Hood Conference.

Gakwasi ranked fifth in the conference in scoring at 13.3 points per game as a junior and was on pace to challenge for the Rams’ all-time points mark had he gotten to play a full senior season. At the start of the school year, Gakwasi signed to play college ball at Princeton. “His body looks different — he has physically matured,” Blue said. “The game has slowed down for him and everything is catching up to his talent.”

Johnson also was a top-10 scorer in the league last season, putting up 11.8 points per game. “At 6-foot-8, he is long and athletic — one of the best juniors in the state,” Blue said. “He will be able to showcase his talents — how he handles the ball and how he can shoot it.”

Slater gives the Rams a consistent shooting threat from beyond the arc, helping to spread the floor with his deep range. “He’s one of the best shooters in the state — he’s in range when he walks into the gym,” Blue said.

Central Catholic won seven of its final eight games last season, including playoff victories over Canby and Tigard by a combined 34 points. The Rams were set to take on league foe Clackamas at the Chiles Center when the season was ended because of COVID-19.

“That was one of the most difficult things I’ve had to coach through,” Blue said. “The guys had worked so hard, and we were hitting our stride. It was difficult to have that conversation, but they had a really good perspective about it.”

The Rams expect to be without junior Jordan King and sophomore Riley Williams this spring — both recovering from injuries suffered during football season. Still, Central Catholic figures to be among the teams competing for a Mt. Hood Conference title in this shortened season.

“We need to continue to be unselfish, move the ball and bring that desire on defense,” Blue said. “Any time you have a chance to go out and compete and have fun with your teammates, that’s all the motivation you need.”

“We always have a target on our back — teams want to beat us, and we want to step up to that challenge.” — David Blue