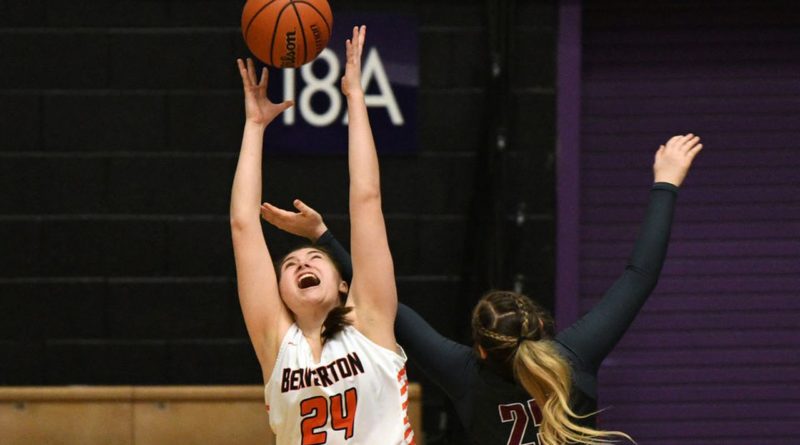 Over the next two weeks, SBLive Oregon will break down more than 100 Oregon high school basketball teams. Here’s our look at the Beaverton Beavers girls of the Class 6A Metro League.

Borter made the all-Metro team two seasons ago as a sophomore, and as the Beavers’ only returning starter, the George Fox commit should become a focal point of the offense after averaging 4.2 points and 2.8 rebounds per game last season. “Alexa does all the little things. Whatever the team needs, she does,” Naro said. “She’s a solid defender, can shoot from the outside, drive to the basket — she just has a high basketball IQ.”

Naro was one of the first players off the bench last season, averaging two points and 1.4 rebounds per game. She will take on a bigger role for the team this spring, especially from three-point range — 15 of her 16 field goals last season were from beyond the arc.

Baker has been one of the soccer team’s top players the past two seasons, making the all-league second team as a junior. She’ll now get the chance to shine on the hardwood. “She’s a great athlete, very explosive and a very good defender,” Naro said.

Spear (3.2 points, 2.4 rebounds per game as a freshman) often was the first post player off the bench last season, offering a change of pace from the more physical Laura Erikstrup. “Lainey is so strong and explosive, she can stop on a dime, post up and score or attack off the drive,” Naro said. “And she can guard anyone from a point guard to a five.”

Alexa’s younger sister brings a much different skill set to the court — she shot 34 percent from three-point range and averaged 3.5 points per game off the bench. “Zoe is really crafty with the ball,” Naro said. “She can score at all three levels and just has a way of getting to the basket.”

The third of the Naro sisters to play for Mom with the Beavers, Maddie (1.5 points, 1.2 assists per game as a freshman) backed up Mary Kay at point guard last season and has a presence that belies her years. “Her biggest strength is that she’s a great leader,” Kathy Naro said. “She distributes the ball well and has a way of making people better.”

Rice was the top player on the Beavers’ JV team last season, a lefty scorer who will be one of the first players off the bench this spring.

The Beavers were the odds-on favorite to win their first state championship last season, going undefeated against Oregon opponents heading to the semifinals, when the world came crashing to a halt.

While they graduated three all-state players who went on to play Division I ball (the Erikstrup sisters and Mary Kay Naro) and a fourth all-leaguer (Reverman) who starred at Puget Sound, they still would have been a title contender in a normal season.

They return three seniors who played secondary roles last season but will step into leading roles this spring, led by 2018-19 all-leaguer Alexa Borter. Three sophomores who played big minutes as freshmen wait in the wings to become the next standout class to play for Kathy Naro, who twice led Jesuit to the state championship game (2003, 2007).

“I’m very lucky to have a lot of kids who can pick up the game really quickly,” Naro said. “All three of those sophomores are tremendous basketball players who could have started last year as freshmen without us having such a deep senior class. All three will have huge roles this year.”

The key will be for Naro to develop depth around that trio. Rice will be the first of a JV group that won 14 of 15 games during a stretch last season to crack the regular rotation.

“We have a dedicated group of seniors, and we hope to be able to celebrate them, even if it’s in a short season. As juniors, they didn’t get to finish the state tournament, and now, we hope to get the chance to honor them.” — Kathy Naro