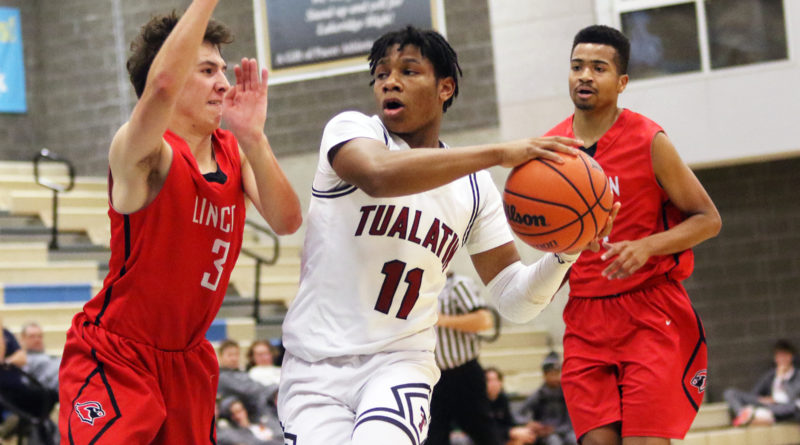 Over the next two weeks, SBLive Oregon will break down more than 100 Oregon high school basketball teams. Here’s our look at the Tualatin Timberwolves boys of the Class 6A Three Rivers League.

Ogoli played point guard and off the ball for Tualatin as a sophomore. Jukkala said Ogoli is a good playmaker who can shoot consistently from long range. “He ran the team real well last year at times; I think he got good experience that way,” Jukkala said. “He has an innate passing ability that I really like, and he’s a very good on-ball defender for us.”

An honorable mention all-Three Rivers selection last season, Burke is a rugged post defender who also is a great passer and solid rebounder. “He has real strength,” Jukkala said. “He is working on his shot, and he can play out to the three-point area if need be.”

Ross was Tualatin’s third-leading scorer a season ago en route to all-TRL honorable mention. Jukkala said Ross makes good decisions with the ball in his hands. “He has great basketball instincts and is a strong, physical player,” the coach added. “I’ve seen improvements in a variety of areas. He should keep developing and getting better each year, and he’s good right now.”

Shaw came on at the end of last season as a hybrid wing/post who can stretch the defense. “He rebounds the ball really well … and he’s the most experienced player of anybody we have,” Jukkala said. “He started some last year, and I could see him being in the starting lineup this year.”

“We lost about four seniors … so, we’re going to have a lot of kids back,” Jukkala said. “But we’ve got a lot of people that are in other sports, so they aren’t working out with us as much. I’m not sure who we are going to have yet. I expect to have everybody, but you just don’t know.”

Passaglia is a rangy senior wing who excels on both ends of the court. Denning also can shoot and defend, and Howarth projects to be a classic energy player.

“Jackson got injured last year but he’s our best three-point shooter,” Jukkala said. “Carson can really shoot the ball outside, and defensively he’s so long that he can create problems as well. … Blake really gets after it and provides important minutes. I think he can do the same thing at the varsity level.”

With a solid mix of seniors and younger players, Jukkala plans to approach the upcoming spring slate as a normal season. The team wants to send the seniors out on a high note while preparing the other kids for future battles in the TRL.

“You would do your seniors a disservice to not play hard and do everything you can to win,” Jukkala said. “I understand we may not have the carrot at the end of the season like a state tournament, but you want them to be recognized and rewarded for all the effort they put in to your program. … And then for the younger kids, this is developmental. I’ve never been part of anything as a coach or a player where you can lose a year and it’ll be OK. You have to develop those younger kids.”

“The No. 1 thing in our program is compete, and the kids will do that. And we’re in a tough league, so those are the types of teams we are going to play.” — Todd Jukkala