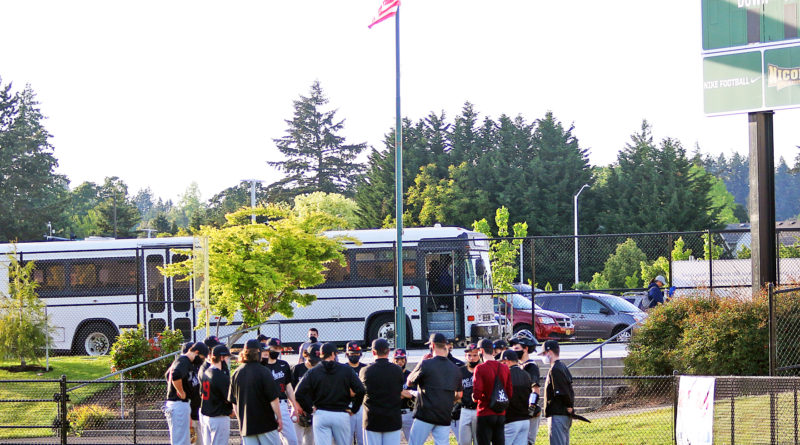 Momentum was up for grabs.

The Tualatin baseball team, getting off to a roaring start to the contest, had momentum first.

Then Tigard grabbed it, coming through in the clutch on defense and then cutting into the Timberwolves’ lead.

But, in the end, Tualatin reclaimed momentum, as well as a desired victory over its rival.

The Timberwolves, exploding with the bats early and then pulling away late, notched a 9-4 win over the persistent Tigers in a Three Rivers League contest played Monday under sunny skies at Tigard High School.

“There definitely was some extra motivation. We know a bunch of guys over there,” said Tualatin senior Shawn Hunt, who had four hits in addition to picking up the save on the mound in the win, which gave the Timberwolves a two-game series sweep against Tigard. “It means a lot. Sweeping Tigard is always big — they’re our rivals.”

With the victory, its fourth in a row and seventh in the past eight games, Tualatin improved to 7-3 in Three Rivers League play (9-4 overall), keeping the Timberwolves in second place in the league standings, trailing unbeaten Lakeridge.

“Honestly, we’re just extremely grateful that we just get to play,” Biggs said. “Last year, it was one of the worst times of my life, missing my whole sophomore year of baseball. It was a really tough moment for us, so, now, we’re playing as hard as we can for every moment that we get.”

“We just want to go out there every game and play our best,” Hunt said. “Hopefully, we’ll rack up a few more ‘dubs’ before the end of the season.”

The young Tigard team moved to 2-8 in Three Rivers League games (4-9 overall), putting the Tigers in sixth place in the league standings.

“I thought it was good. We really picked it up in the last few innings. We got it going,” Tigard sophomore Buddy Brands said of the Tigers’ effort to rally in Monday’s contest. “All of our games have been big learning experiences. We’re learning from every single game and getting better all the time.”

Motivated Tualatin got off to a roaring start in Monday’s clash of the rivals. Biggs got things going for the Timberwolves in the top of the first inning, lacing a one-out single to left field. Hunt and junior Michael Miller followed with singles, loading the bases with one out. Biggs scored when Tigard committed an error on a grounder by senior Jackson Larrance. Hunt scored from third on a balk, giving the Timberwolves an early 2-0 advantage.

Tualatin kept rolling in the top of the second inning. Junior Marc Christensen, leading off the frame, walked and stole second base. Senior Connor Goodhue struck out, but he was safe at first base thanks to a wild pitch on strike three. Junior Xavier Otto was hit by a pitch, loading the bases with no outs.

Biggs, Hunt and Miller followed with consecutive RBI singles, increasing the lead to 5-0. Biggs scored from third when Tigard turned a double play on a grounder to sophomore shortstop Isaac Hertzog, making the score 6-0.

“We came in firing on all cylinders and got the job done,” Hunt said of Tualatin’s fast start.

“We talked about it. The first game, we kind of let off a little bit,” Biggs said, referring to the Timberwolves’ 3-0 home victory over the Tigers on Friday. “We had a better game plan and we were ready to swing at the first pitch.”

The Timberwolves really had a chance to blow the game open in the top of the third inning, as a leadoff triple by senior Max Kraknke and walks to Christensen and Goodhue loaded the bases with no outs.

But that’s exactly when momentum seemed to switch to Tigard’s side.

Brands, the Tigers’ starting pitcher, coaxed a fielder’s choice grounder, with senior third baseman Kolby Shimojima throwing out Kraknke at the plate, followed by a strikeout and a pop out, allowing Tigard to get out of the inning unscathed.

“I got the bases loaded, with a couple of walks, so I knew I just had to battle and make a couple of pitches,” Brands said. “I thought that was the turning point of the game, and our bats started going after that. I thought it was good.”

Tigard took advantage of its newfound momentum in the bottom of the third inning.

Senior Caleb Debban, leading off the frame for the Tigers, doubled to left-center field. Sophomore Cameron Masters-Doble followed with a double to left, driving in Debban for Tigard’s first run. Tigers junior Charlie Peters hit an RBI single to left field. With one out, Brands drove in Peters with a single to center, cutting the Tualatin lead to 6-3.

“I was just sitting on curveballs,” Brands said. “I was waiting for a pitch I could see, then I saw it well and got the barrel on the ball.”

The Tigers got even closer, at 6-4, after Hertzog scored in the bottom of the fifth inning.

While momentum was still wearing Tigard green at that point, Tualatin knew what it had to do.

“We were thinking that we just had to keep battling, keep fighting to the end,” Hunt said.

“We were just thinking to keep our heads down, and keep going, and never give up — just keep going,” Biggs added.

The Timberwolves answered with a run in the top of the sixth inning. Hunt singled to center field to lead off the frame. He scored on freshman Ethan Matsuoka’s two-out pinch-hit single to right field, making it 7-4.

Tualatin added two more runs in the top of the seventh. Goodhue walked on a 3-2 pitch with one out and ended up scoring from third on a Tigard throwing error. Hunt singled in Otto later in the frame to make the score 9-4.

“It was a blast. I love coming in and closing it down,” Hunt said.

In addition to getting the save, Hunt went 4 for 5 at the plate, with two runs and two RBIs.

Biggs was 2 for 5 with two runs and an RBI. Miller went 3 for 5 with an RBI. Otto and Goodhue each scored twice. Christensen walked three times and scored a run. Matsuoka had a hit and an RBI.

Jackson Larrance pitched the first four and two-thirds innings for the Timberwolves, giving up four runs (three earned) on seven hits while striking out six and walking three. Sophomore Logan Larrance got the final out of the fifth inning and the first out of the sixth before giving way to Hunt.

“This was a lot of fun, coming out here and playing a rivalry game in front of a lot of fans,” Hunt said.

“It’s a huge rivalry between us,” Biggs said. “They beat us (in 2019), pretty bad, so we came back with a chip on our shoulders. We were ready to get after it.”

For Tigard, Brands was 2 for 3 with an RBI. Debban went 2 for 3 with a double and a run. Masters-Doble and Peters each had a hit, a run and an RBI. Hertzog walked twice and scored a run.

Both teams will be back in action Wednesday. Tigard will be home to face Lake Oswego and Tualatin will travel to West Linn for Three Rivers League games starting at 5 p.m.

One thought on “‘We came back with a chip on our shoulders.’ Tualatin baseball seizes momentum, fights off Tigard for rivalry series sweep”