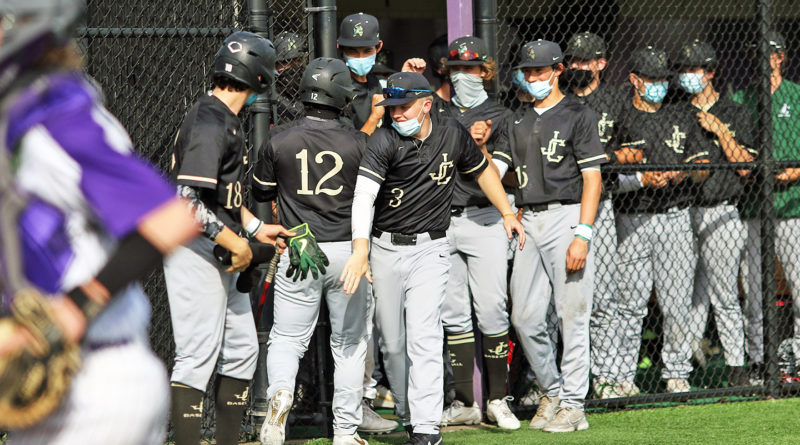 The Jesuit baseball team used a couple of impressive home-run blasts to take an early lead.

The Crusaders turned to late-inning bunts and base running to wrap up the victory.

In other words, everything went according to plan.

Jesuit, getting second-inning back-to-back home runs from sophomore Brock Leitgeb and senior Sean Murphy, held a one-run lead over Sunset for most of the way, before scoring five runs in the seventh inning to pull away from the Apollos and notch a 7-1 victory in a Metro League game played under sunny skies Wednesday at Sunset High School.

“It went really well,” Murphy said. “We’ve been hitting well, especially in the fifth, sixth and seventh innings. We’ve been working hard and playing as a team.”

Jesuit improved to 8-2 in Metro League play (9-2 overall), putting the Crusaders in a virtual tie with Westview, which improved to 7-1 in Metro games with a 6-3 win at Mountainside on Wednesday, for first place in the league standings. The victory, combined with a 6-0 home win over Sunset on Monday, gave the Crusaders a two-game sweep against the Apollos, which had some extra significance for Jesuit, after the Crusaders were swept by Westview in a two-game league series last week.

“It was important, especially after Westview. We were really nervous going against them,” Murphy said. “We needed to get back to doing what we do, and we did that against Sunset.”

“It was a big win, especially coming off those two loses to Westview,” Leitgeb said. “We knew this was a big game. Monday was a big game against (Sunset senior) Chance (Wallace). He had something like 30 (strikeouts) in his last two games, so that was something. We won that game, had some fun this game. We got loose some, at the beginning, and we kind of figured it out in the seventh inning.”

Sunset moved to 4-4 in Metro League play (7-4 overall), putting the Apollos in fourth place in the league standings.

“For sure, we can compete with them,” said Sunset sophomore catcher Nathan Davis, who had two hits. “We practiced all weekend to face their velocity. In the cages, we practiced against high velocity with the machines, so we were prepared for them.”

After a first inning that saw both teams go three-up-and-three-down, Jesuit was able to strike in the top of the second.

Leitgeb, with one out in the frame, launched a sky-high fly ball to left field. The ball, staying in the air for a long time, drifted just over the fence in left field for a solo home run, giving the Crusaders a 1-0 lead.

The left-handed Murphy, up next, ripped a solo home run over the fence in right field, giving Jesuit a 2-0 advantage.

“I haven’t been hitting very well, and I changed my swing a bit in practice, and it showed today. I came up, looking for something in the middle. I was looking fastball, but it was a curveball, and I stayed on it,” Murphy said. “It didn’t really feel good. It felt like it was off the end of the bat. But I started running, and it kept going. It was my first one this year. It felt great.”

It also helped Murphy that he saw Leitgeb hit a home run right before he stepped to the plate.

“It was motivation,” Murphy said. “That definitely gave me confidence.”

“I was so happy,” Leitgeb said of the consecutive home runs. “Both catchers, and first back-to-back in high school. That was great.”

Sunset tried to answer right back, as Davis, leading off the bottom of the second inning, doubled down the left-field line. But he was eventually called out on a runner’s interference, ending the inning.

The Apollos’ starting pitcher, junior Parker Coakley, settled down after the second inning — in a big way.

After the back-to-back home runs, Coakley, a right-hander, retired the next 10 batters he faced, and 13 of the next 14, giving up just one walk in the process.

“He located well,” Davis said of Coakley. “The only pitches he missed were off-speed, and they kind of got hit, but besides that he did really well.”

Sunset tried to chip away at the Jesuit lead, and in the bottom of the fourth inning, the Apollos managed to get closer.

Senior Nick Molitor, leading off the frame for Sunset, hit a ground-ball single to center field. Molitor then stole second base. With two outs, senior Jean Finol singled to center field, driving in Molitor, trimming the Jesuit lead to 2-1.

The Crusaders were still clinging to the one-run advantage entering the top of the seventh inning.

Senior Mason Masterson got things going for Jesuit, hitting the first pitch of the inning into left field for a single. Leitgeb put down a sacrifice bunt, with Masterson moving to second on the play.

“That bunt was huge, starting it off,” Murphy said.

Murphy followed with a double to left field. Masterson, having to hold up to see if Sunset left fielder Kyle Jaekel could come up with a diving catch, moved to third on the hit.

Marler scored on a bunt single by junior Ryan Hart. Jones scored on a squeeze bunt by sophomore Ryan Cooney. Hart came home on a double to center by Noah Lyman, capping the big inning and giving Jesuit a 7-1 lead.

“We take pride in how we play in innings five, six and seven, and we do our jobs,” Murphy said. “We just did our thing.”

Sunset tried to battle back in the bottom of the seventh. Davis, leading off the inning, singled to right field. One out later, junior Matt Bieker was hit by a pitch. But Jesuit junior Ansel Balmer, pitching in relief, got a strikeout and coaxed a game-ending ground out to wrap up the 7-1 victory.

“This was awesome,” Murphy said.

“This was amazing. I love it,” Leitgeb said. “I 100-percent love the weather, and it made it really fun.”

Junior Nelson Keljo picked up the pitching win for the Crusaders. In six innings, the left-hander gave up one run on three hits, striking out 11 and walking none.

“Nelson is one of my best friends. He just killed it,” Leitgeb said. “He has a fun time out there and just shuts things down. He has so much confidence, and no one can really hit him.”

Murphy helped lead the seven-hit Jesuit offensive attack. He went 2 for 4 with a double, a home run, two runs and two RBIs. Jones was 1 for 3 with a run and two RBIs. Lyman, Masterson, Leitgeb and Hart had one hit apiece.

Balmer, pitching the seventh inning, gave up no runs on one hit, striking out two.

For Sunset, Davis went 2 for 3 with a double.

“I was thinking fastball the first time up, and I got it,” Davis said. “The second time, I just missed it. Then, in the last at-bat, he threw me a spinner, and I just waited on it.”

Coakley, in a complete-game pitching performance, gave up seven runs on seven hits, striking out four and walking two.

“We tried to fight back, but we just came up short. We had a tough inning before that,” Davis said.

“For sure, this will make us better. Playing against good competition will always make you better.”

Both teams will be back in action Friday. Sunset will play at Mountainside in a Metro League game starting at 5 p.m. Jesuit will travel to West Linn for a 5 p.m. nonleague contest.