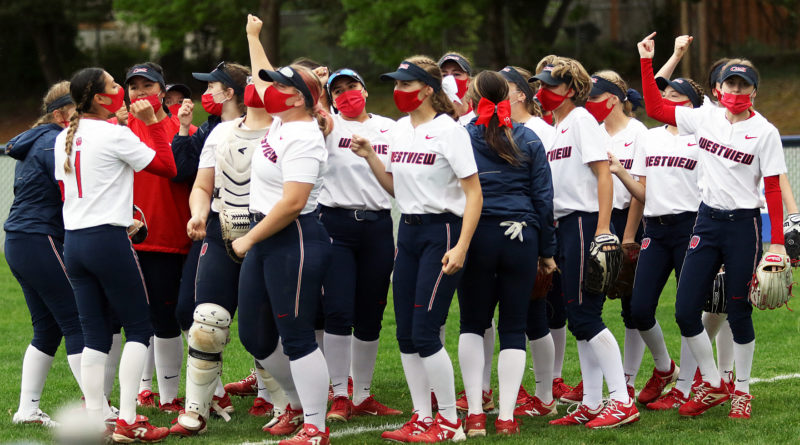 Absolutely everything seems to be coming together for the Westview softball team. And the Wildcats are loving every minute of it.

Westview, pounding out six extra-base hits, playing error-free defense and getting a dominant performance from senior pitcher Julia Jordan, powered its way to a 9-2 win over Mountainside in a Metro League showdown played Monday under rainy skies at Westview High School.

“It’s pretty big. The last few games, we’ve really stepped it up,” said Jordan, who threw six shutout innings. “We’re all really vibing together as a team, finally. It’s a little late, but we’re here, and we are competing.”

“It’s huge. I think, overall, we did amazing,” said Westview junior third baseman Izzy Carattini, who had a two-run homer and a two-run double. “We kept our energy up and I think we did really good.”

With the win, its third in a row, Westview improved to 4-1 in Metro League play (6-3 overall), putting the Wildcats in second place (behind 6-0 Jesuit).

“To me, it’s the energy — the loudness in the dugout,” Jordan said of the team’s recent success. “It’s the chemistry between the players. That’s huge in the culture here at Westview.”

The young Mountainside squad, with one senior on its roster, moved to 4-2 in Metro League games (7-3 overall), putting the Mavericks in third place in the league standings.

“We’re just building a foundation now, as a team, and we’re going to come back next year and build on top of that,” said Mountainside junior outfielder Megan Landes, who smacked a two-run, seventh-inning home run. “We’re definitely learning, especially against the tougher opponents.”

While the future certainly seems bright for Mountainside, Westview is making sure to cherish every single moment of the shortened 2021 season — especially the seniors, such as Jordan.

“Every day I come out here, whether it’s practice or a game, and I’m just beyond grateful to be here,” said Jordan, who plans on playing college softball at the Academy of Art University in San Francisco. “For the seniors last year, they got the worst end of the stick, so, just for us to even be here is a huge blessing. I’m just taking every moment and living it out with my teammates.”

Jordan, a hard-throwing left-hander, definitely seemed fired-up throughout Monday’s game. In six shutout innings, she gave up just two hits, while striking out eight and walking one.

“I’ve come a long way. I’ve worked so hard to get to where I am, so, heck yeah, I take every success with a bang, definitely,” Jordan said. “I think this may have been my best game yet. I’m beyond proud of myself, but my defense has just been the best. I can count on them for anything. That support behind me has been amazing.”

Westview broke a scoreless tie with a run in the bottom of the second inning. Sophomore Jasmine Barela drew a leadoff walk to get things started for the Wildcats. Barela moved to second base on a sacrifice bunt by junior Zoe Zimmer and advanced to third on a wild pitch.

The Wildcats struck for two more runs in the bottom of the third inning. Freshman Sophia Cherry, leading off the frame, ripped a first-pitch double to left-center field. Cherry moved to third base on a wild pitch. After senior Emma Antich walked and stole second, Barela hit a one-out double off the fence in left-center field, plating Cherry and Antich, increasing the lead to 3-0.

Westview kept its bats going in the fourth inning. Showalter, leading off, doubled to left field. Pinch runner Sophia Groshong moved to third base on a sacrifice bunt by freshman Evyn Morriss. Senior Bailey Carrier doubled to right field, driving in Groshong to make the score 4-0. After Cherry reached base on a fielder’s choice grounder, Carattini lined a double down the left-field line, driving in Carrier and Cherry. One out later, Carattini scored on a single by Barela, capping the big inning and giving the Wildcats a 7-0 advantage.

“Most definitely, hitting is contagious for us,” Carattini said. “Once someone comes in and hits in the clutch, I think everyone steps up and keeps that momentum going. Then our energy just keeps adding up and adding up.”

And the Wildcats, and Carattini, weren’t done yet.

After Cherry reached base on an infield single with one out in the bottom of the sixth inning, Carattini belted a two-run home run, her first of the season, over the fence in center field, making it 9-0.

“That was amazing. It felt amazing,” Carattini said. “I knew, at the plate, I had to do something, create something. I just had to keep my team going. It felt really nice off my bat. I was hoping for it.”

Mountainside tried to fight back.

Mavericks junior Addison Kachnik, leading off the top of the seventh inning, reached base on an infield single. Landes followed with a home run, her third of the season, hitting the ball over the fence in right-center field.

“I figured we had just one inning left, so I should just let everything loose, and I just went up there with the confidence that I could hit it,” Landes said. “It was on the outside corner, and I just followed the pitch with my body. It felt good coming off the bat; I didn’t even feel it.”

“We don’t want to leave a zero on the board,” Landes said. “We always want to make sure to get runners on, and runners in.”

Westview had nine hits. Carattini was 2 for 4 with a double, a home run, two runs and four RBIs.

“At first, it wasn’t so good, but, in my mind, I knew I had to come up clutch for my team,” Carattini said. “I have to produce for my team. I have to just keep it alive.”

“It gets better and better every time,” Jordan said of the team effort. “And, with our season coming to an end soon, we’re just taking it and loving it. We’re just so grateful.”

For Mountainside, Kachnik went 2 for 3 with a couple of infield singles, and she scored a run. Landes was 1 for 3 with her two-run home run. Sophomore Chloe Arbow went 1 for 3. Freshman Sam Bradford drew two walks.

Maybe most important for the Mavericks in Monday’s game was the fighting spirit the team showed late in the contest.

“We’re really good at sticking together as a team,” Landes said. “We played Tigard earlier this year, and we did a good job battling back against them, and we did the same thing here.”

Westview returns to Metro League play Wednesday, when it will be home to face Sunset at 5 p.m. Mountainside will travel to Sandy on Wednesday for a 5 p.m. nonleague tilt. The Wildcats and Mavericks will have their rematch Friday, when they play at Mountainside in a 5 p.m. Metro League contest.