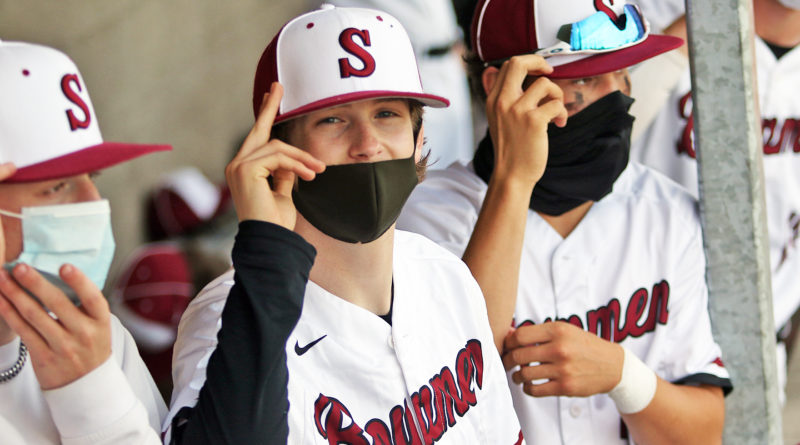 The Sherwood baseball team didn’t exactly start the season the way it hoped.

But, since then, Sherwood hasn’t let anything — especially not Newberg — stand in its way.

The Bowmen picked up their sixth consecutive victory after that season-opening loss by running to a 10-0, five-inning win over the Tigers in a Pacific Conference game Tuesday at Sherwood High School. It was Sherwood’s fourth straight victory by 10 or more runs.

“We kind of used it as motivation. We didn’t let it get to our heads,” Sherwood senior catcher Josh Woods said of that season-opening setback. “We knew that they (Lakeridge) have a great team, but we know we’re a great team, too. The next game, we knew we were playing a tough Mountainside team, then a tough Lake Oswego team, and we just put the nail in the coffin on both of them. And, ever since then, we’ve been on fire.”

“We used that as motivation, instead of getting down on ourselves,” said Sherwood junior pitcher Ian Umlandt, who threw a complete-game one-hitter in the win against Newberg. “It’s been 700 days, or something like that, since we played a game as a team, so to shake some rust off and get back out here was good. We’ve been able to shake that loss off, and really come back out here and compete as to the ability we know we’re able to.”

With the victory, Sherwood, which has outscored its past four opponents 48-1, improved to 6-1 on the season and to 4-0 in Pacific Conference play, putting the Bowmen in a virtual tie with McMinnville for first place in the conference standings. The Grizzlies improved to 5-1 in conference play (5-2 overall) with a 10-0 win over Forest Grove on Tuesday.

“I think the big goal with this group is a league championship,” Umlandt said. “That’s something we’ve never done at the 6A level before, and with this group of guys, with a lot of seniors, it would be good to send them off with a title, and also get the young guys knowing what Sherwood baseball is really about, and that’s success and competitiveness. We want a league championship, and I think we’ve started off right.”

“Oh my gosh, our goal is to win the league championship and have fun,” Woods said. “We’re all pretty close, so it’s been kind of fun, even with as short of a season that it is. We’re glad to even have a season, because a couple of months ago, we didn’t know if we were going to have a season or not. This is a good group of guys. I love playing with them, and it’s been fun behind the dish, catching everybody.”

Newberg moved to 3-3 in Pacific Conference games (3-4 overall), putting the Tigers in fourth place in the conference standings.

“As a team, it was a bit rough. But, I don’t know, we just need to move on,” said Newberg junior leadoff hitter Ryan Jacob, who had the Tigers’ only hit and drew a walk. “We need to work on our mental preparation before the game. We just have to arrive ready to play.”

Umlandt didn’t exactly get off to a promising start, as he walked Jacob in four pitches to lead off the top of the first inning.

“I had a little bit of mechanical issues in the bullpen, and then, to start the game with a walk on four pitches, I just had to think to myself, ‘We just have to settle down and, as long as I can throw strikes, we control the game,’” the Bowmen left-hander said. “As long as you’re on the mound, you get to choose what to do. It was just a matter of slowing down and sticking to the game plan.”

With that in mind, things definitely turned around — in a big hurry.

Woods threw out Jacob trying to steal second, with Bowmen senior second baseman Jack Fulwiler making the tag, and Umlandt struck out the next two batters, quickly ending the inning.

Sherwood then took control in the bottom of the frame. Umlandt, leading off the inning, singled to left-center field. Junior Cam Christenson drew a walk, and both runners moved up a base on a passed ball. Woods then came through with the first big hit of the game, doubling to left field. Umlandt and Christenson scored on the hit, giving the Bowmen a quick 2-0 lead.

“There was a passed ball that put runners on second and third, so I was just thinking, ‘Get them in,’” Woods said. “I didn’t care how, but I got lucky enough to put it down the left-field line. The ball just kept rolling, and I got on second.”

The Bowmen bats really heated up in the bottom of the second inning. Senior Eli Holbert, leading off the inning, reached base on a Newberg error. One out later, junior Brennan Wieg singled to right field. With two outs, Umlandt singled in Holbert, increasing the lead to 3-0. But Sherwood wasn’t done yet — not even close.

Wieg scored when Newberg committed an error on a grounder by Woods. Senior Caden Davis followed with a two-run single to left field, and junior Chase Highberger smacked a two-run double to left field, pushing the margin to 8-0 at the end of the inning.

The Bowmen added another run in the bottom of the third, when Wieg scored on a sacrifice fly by Umlandt, making the score 9-0.

“You could see on the scoreboard, two runs in the first, six runs in the second,” Woods said. “That’s how it’s been all year. Hitting is very contagious with this team, and that’s been very fun.”

“It’s a lot easier when you get out of the gates quick,” Umlandt said. “We scored six in the second and had nine after the third. When you’re up 9-0, and have thrown only 30 pitches, it takes the pressure off. You just have to throw strikes.”

And Umlandt threw a lot of strikes. He took a no-hitter into the fourth inning before Jacob, leading off the frame, came through with an infield single.

“I tried to get us going,” Jacob said.

But a fly out, a ground out and a strikeout left Jacob stranded on base. Senior Lucas Saunders was Newberg’s only other baserunner, as he drew a two-out walk in the top of the fifth.

Holbert, leading off the bottom of the fifth inning, doubled to left field and advanced to third on a Newberg error on the play. Holbert scored on a one-out single by senior Colby Fox, making the score 10-0 and ending the game by virtue of the 10-run rule.

“I don’t want to jinx it, but we’ve got a little streak going,” Woods said. “We just came out ready to play. We’ve been playing well all year. Ian came out and pitched a great game.”

“It’s a big one, going 2-0 in this series, and giving up just one run in our first four league games is special,” Umlandt said. “After the Lakeridge game, we had to shake some rust off and come back. But it’s definitely been good to go 6-0 after that. Winning is always fun, and winning four straight by 10-plus, you’re going to have a lot of fun.”

Umlandt was certainly efficient. In five innings, he gave up no runs and one hit, while striking out eight and walking two.

“Ian did great,” Woods said. “He kind of scared me in the bullpen. He walked one batter, and then he was just money. He’s been that way all year. Ian has been making it easy for me. All I have to do is catch it.”

“Giving up that first hit is always something that is a struggle, but, at the end of the day, it’s a 10-0 game with only one hit, and we get out of here early,” Umlandt said.

The Tigers will be back in action Wednesday, when they travel to Sunset for a nonleague game starting at 5 p.m.

Sherwood will be home Wednesday to face Glencoe in a Pacific Conference contest starting at 5 p.m.