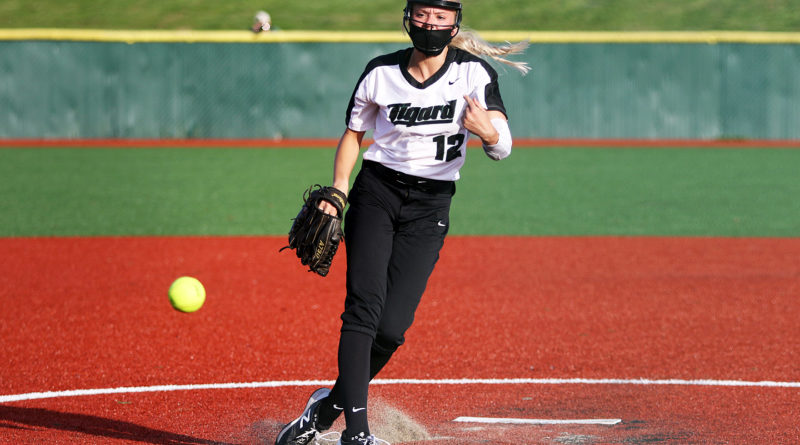 Makenna Reid had a feeling that it could be a special day.

She was right. Wow, was she ever right.

Reid, a junior pitcher for the Tigard softball team, was nothing short of spectacular, as she threw a no-hitter, striking out 17 batters while walking only one, in helping lead the Tigers to a 2-0 win over rival Tualatin in a Three Rivers League showdown Wednesday at Tualatin High School.

“When I was warming up, I knew that it was going to be a good day,” the hard-throwing left-hander said with a smile. “My spins were really working well. This meant a lot to me. My speed was there, and I was just hammering the zone.”

With the win, Tigard stayed unbeaten, improving to 5-0 overall and 3-0 in Three Rivers League play, putting the Tigers alone atop the league standings.

“It’s a great win,” Kisor said. “It’s great to have a season, and, of course, it’s great to beat Tualatin in our rivalry game.”

The young Tualatin squad moved to 3-1 in TRL games (3-2 overall), putting the Timberwolves in second place in the league standings.

“We are a young team, but don’t let that fool you, because we still bring it,” Tualatin junior pitcher Camille Schmitz said. “I’m pretty proud of my team.”

“It definitely was a fun one, especially since it’s our rival game. We got to play against some people that we’ve played against since Little League. It’s crazy,” Tualatin senior first baseman Taylor Corcoran said. “We’re starting to come together and learn about each other as players. And we’re starting to help bring each other up and adjust to pitchers like this. So, a game like this will bring us even closer.”

With Reid and Schmitz squaring off in the circle, it was clear, even before the game started, that runs would be at a premium in the clash between the rivals.

Tigard was able to strike quickly, getting a run in the top of the first inning.

Freshman Ella Dardis got things started for the Tigers, legging out a one-out double to center field.

One out later, sophomore Karen Spadafora singled to left-center field, driving in Dardis to give the Tigers a quick 1-0 advantage.

“It was good,” Reid said of the early lead. “I definitely fed off that. I built my momentum off of that.”

And she took off.

Reid struck out the first eight batters she faced before walking Tualatin freshman Remie Strahm with two outs in the bottom of the third inning. Reid quickly responded, getting an inning-ending strikeout.

Reid then struck out two of the three batters she faced in the fourth inning, giving her 11 strikeouts to that point.

With Schmitz also excelling in the circle, Tigard still was clinging to its 1-0 lead entering the fifth inning.

Kisor would change that. With one out in the top of the fifth, Kisor fouled off a bunt attempt on the first pitch of her at-bat. That turned out to be a good thing.

“Yeah, because I’ve been in a slump,” Kisor said of the initial strategy of having her try to bunt. “But it really helped me get my tracking. That helped me hit it.”

Soon after the failed bunt attempt, Kisor launched the ball over the fence in left field for a solo home run — her first home run at the high school level, and just the second home run in her softball career.

“It felt great,” said Kisor, whose other home run came while playing club softball. “It proves that anything can happen, because I’ve been in a slump. It felt good, but I didn’t expect it to happen.”

Kisor’s home run increased the Tigard lead to 2-0. With the way Reid was pitching, that proved to be more than enough.

For the game, Reid struck out 17 of the 22 batters she faced. Of the four balls Tualatin put into play, none left the infield. Tigard senior shortstop Katie Regalado made plays on a couple of grounders, Reid caught a pop-up and Tigers senior first baseman Sophia vanderSommen made a tag out after fielding a bunt in the bottom of the seventh inning.

“Lately, I’ve really been fired up,” said Reid, who also threw a six-inning no-hitter in a 15-0 win at Oregon City on April 14, and another no-hitter in a 2-0 home victory over Westview on April 16. “It’s my junior year, and it means a lot to me, and I want to make a good run and win every game.”

Tigard had five hits. Kisor went 2 for 3 with an infield single to go with her home run. Dardis, Spadafora and Reid had one hit apiece. Junior Kaylin Kisor added a sacrifice bunt.

“It was fun. The girls and I have really good chemistry,” Reid said. “I enjoy talking with them and having them playing behind me.”

“We just played as a team,” Kali Kisor said. “We kept our energy up and worked together.”

Tigard is hoping that formula leads to more success in the abbreviated 2021 season.

“Hopefully, we’ll stay undefeated. We want to keep playing as a team, and keep up the energy,” Kali Kisor said. “This was great. It’s great to have a season and play with all of these girls again.”

For Tualatin, Schmitz turned in a strong pitching performance. In seven innings, she gave up two runs on five hits, striking out 12 and walking none.

“It definitely fired me up more. It’s fun when there’s two pitchers that are really battling against each other like that. It’s a lot of fun, and it did fire me up quite a bit,” Schmitz said. “I think we both pitched really well. It was a battle of the pitchers, and I had a lot of fun. I think my team did well. We had a lot of quality at-bats. We could have done better, but that’s OK.”

“The energy was so high. We could feel it as we came up to the field,” Corcoran said. “I think both teams really, really battled. It was a battle of the pitchers. We’ll make some adjustments and, next time, I’m sure we’ll come out here and do our job.”

For Corcoran, just getting to play this season has been a blessing.

As a freshman, she was one of the heroes for the Timberwolves in their 4-3 victory over Clackamas in the 2018 Class 6A state championship game, as she drove in the winning run in the bottom of the seventh inning.

Corcoran missed her sophomore year after tearing an anterior cruciate ligament. And, of course, she missed her junior campaign after the season was canceled because of the COVID-19 pandemic.

“It’s really, really special to play with such a new team, learning how to be a leader,” Corcoran said with a smile. “And, in this new year, when we didn’t even know if we’d get to play, it’s fun to be out there for my senior year, playing with a bunch of new friends.”

Both teams will be back in action with Three Rivers League games Friday. Tualatin will play West Linn at 4 p.m. at Rosemont Ridge Middle School. Tigard will be home to face Lakeridge at 5 p.m.

The Tigers and Timberwolves will have their rematch May 7 at Tigard High School.