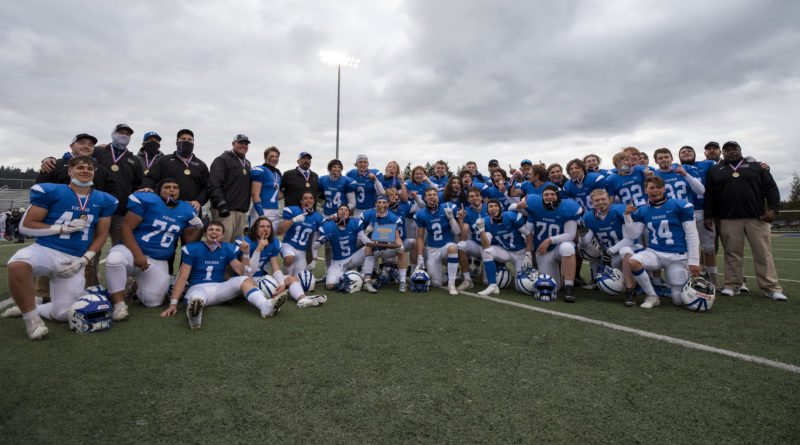 The only thing missing Saturday evening at Herald White Stadium in Cottage Grove was the OSAA logo giving its imprimatur that the Marist Catholic-Mazama showdown was the Class 4A state championship game.

With everything the past year has thrown at the Vikings, it mattered to them not a whit what the record books a decade from now will say.

“People are going to say that we don’t deserve it because we didn’t get a full playoff,” said senior Cole Brosterhous, whose diving interception with 1:53 remaining sealed the victory. “But every team across the state has faced a large amount of adversity, and we overcame it.

“I mean, playoffs or not, you can’t take away from our accomplishment, because we’re the 4A state champions.”

Junior fullback Zeke Heaton, whose 57-yard touchdown run with 6:52 remaining broke a 21-21 tie, added, “I get to celebrate this with my favorite people for the rest of my life.”

For senior quarterback Tristan Lee, Saturday’s victory had even more meaning for a program that defeated 2018 state champion Banks, two-time reigning 5A champion Thurston, and finally, a Marist Catholic team that has five blue trophies in the case on its Eugene campus.

“We’ve worked so hard for this, man,” said Lee, who was 8 of 11 for 120 yards and two touchdowns. “Playing through COVID and all this stuff with these guys, it makes it 100 times better. We’ve been playing football since we were little second-graders. To win it with them my senior year, man, it’s awesome. To go through all this, it’s great.”

After a scoring fest in the first 24 minutes that ended in a 21-21 draw, the game turned into a defensive grinder in the second half, with the Spartans denying Mazama on fourth-and-goal from the 2-yard line and the Vikings breaking up two fourth-down passes and forcing two turnovers in their territory.

“I thought it’d be a low-scoring game because of our defense and their defense,” said Mazama coach Vic Lease.

Marist Catholic coach Frank Geske saw the game as a matchup of mismatches, especially in the second half, with Mazama’s secondary tightening its coverage on his receivers while the Spartans’ underrated line, for the most part, held the Vikings’ running game in check after Mazama ripped through them on its opening drive.

“Our guys started figuring out their option, and we played our rear ends off up front,” Geske said. “We made life pretty hard on them running the ball. They had a bunch of twos and threes (yards) in their offense tonight. In a game like that, where there’s fairly even talent, and they made plays, we made plays, they just made one more when they needed to.”

The Vikings finally broke the tie after Brosterhous broke up a fourth-down pass to regain possession with 7:33 to play at their 40. On second down, Lee appeared ready to pull the ball from Heaton’s grasp on the option, “but I saw that lane he had, and man, I knew he was gone.”

Heaton burst through that lane and ran untouched 57 yards for the go-ahead score with 6:52 remaining.

“My eyes opened wide, and I just took off as fast as I could,” said Heaton, who finished with 109 yards on 14 carries.

“That was just another wrinkle in the veer offense,” Lease said. “We hadn’t shown them midline veer, and that’s what Zeke broke.”

The Spartans had two opportunities to drive for a winning score. The first ended when Erik Hayden knocked away a fourth-and-five pass thrown into traffic at the Mazama 35 with 5:29 left.

After Marist Catholic tackled Eryk Mayes a yard short of a game-clinching first down with 3:03 remaining at the Spartans 32, Joey Laing immediately hit Hagan Stephenson for a 32-yard gain, beating Brosterhous on the play.

Stephenson again got behind Brosterhous on the next play, but Brosterhous didn’t give up on the slightly underthrown ball, cutting in front of Stephenson and making a fingertip grab as he skidded to the turf at the Vikings 11.

“Coach (Beau) Fullerton always says, five bad things are going to happen to you in a football game, and it’s how you respond that’s going to determine your success,” Brosterhous said. “Something bad happened to me, and something bad almost happened again. He got me, and I just had to recover and make a play.”

Brosterhous is the latest in a line of standout athletes to come from his family, three of whom (Rick, Greg and John) played sports at the University of Oregon. B.G. played basketball at Texas. Toss in the Singler line (Ed, Kris, Kyle and E.J.) of the family tree, and the only surprise might be that Cole ended up signing with Western Oregon.

“I keep saying, there’s a number of Division I schools that missed the boat on this kid,” Lease said. “Western Oregon got a steal. He’s one of the best athletes, not only at the 4A level, but in the entire state of Oregon.”

His return from a broken collarbone suffered in Week 2 of the 2019 season made a huge difference this spring for the Vikings, who won their sixth consecutive Skyline Conference title without Brosterhous but were exposed in a first-round playoff loss to Tillamook.

“We were very one-dimensional last year when we didn’t have Cole,” Lease said. “This win is the icing on the cake. We’ve had success over the last few years, won league championships and made runs in the state playoffs, but this win was the exclamation point to what led up to this.

“This group of young men bought-in when they were little kids, and they took on Banks and Thurston, and now Marist. We took care of business. Any arguments at all, this win right here put our program on the map is what it has done. All the adversity with COVID and everything else, we rose to the top, and we’re on top.”

Geske could appreciate the feeling of persevering through a season unlike any other.

“I’m so proud of our guys,” he said. “They had the carrot hung out in front of them since June 15, and I’m super proud of them, like every coach in the state should be of their kids. Because this kind of deal hopefully never comes their way again.”