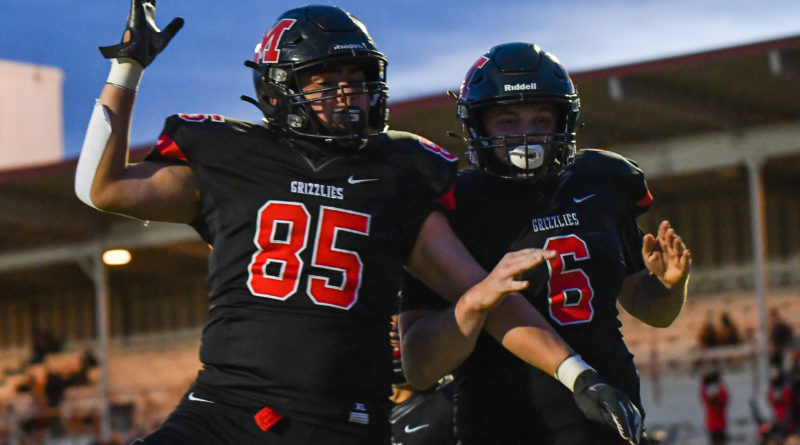 The Pigeon Bowl trophy will remain in McMinnville after the Grizzlies’ 30-0 win against Forest Grove on Friday at McMinnville High School.

Senior quarterback Matthew Washburn scored first on a scrambling touchdown run with 10:27 left in the second quarter. Senior running back Preston Ginter added another score before halftime and got his second rushing touchdown in the third quarter. The Grizzlies kicked a field goal in the fourth quarter and sophomore back Austin Rapp scored the final touchdown.

Though the schools hadn’t played each other in football since 2017 — Forest Grove dropped to Class 5A the next year — the sixth Pigeon Bowl showed there’s still plenty of fire in this rivalry.

Washburn, who was a freshman for Pigeon Bowl V, said his team came out ready to play.

“We knew from the start it was gonna get chippy once they went down,” he said. “I’m under center, people are calling names, I’m like, ‘Hey, scoreboard! You gotta hit the weight room to get good.’”

Grizzlies junior Braden Woods said he didn’t know a ton about the rivalry before Friday.

“There was a little chippiness, but that happens,” Woods said. “We played well and got the ‘dub.”

McMinnville coach Ryan McIrvin, in his sixth season leading the Grizzlies, said he was glad to face the Vikings this year.

“(The rivalry game) was pretty cool and it still is pretty cool,” McIrvin said. “Forest Grove is still a league school for us; our kids played them growing up. It’s a fun thing and we like it a lot more when we come out on top.”

“Defensively we were pretty good,” McIrvin said. “We were in the backfield and forced them into situations that were advantageous to us.”

Washburn said the Grizzlies came together as a team — similar to their other win in 2021, a 26-14 victory against Liberty in Week 3.

“We finally realized what we had to do to get a win and not expecting it but working to deserve it,” he said.

McMinnville and Forest Grove have been rivals for decades, but the football game became known as the Pigeon Bowl in 2013 thanks to a Tweet by then-McMinnville junior Bryce Clinton. The next year, a pigeon-topped trophy was introduced, and the winning school would get to keep the trophy on campus until the next meeting.

Forest Grove won the first three matchups before McMinnville finally took the trophy home for the first time in 2016 with a 42-0 win in Pigeon Bowl IV. The Grizzlies also won in 2017, the last Pigeon Bowl before Friday.

Unfortunately, the trophy did not make an appearance for this year’s contest.

“We went through some construction and it got put in a box,” McIrvin said. “I know where it is in our athletic storage. We’ll have to get it out and put a new plaque on there.”

Trophy or no, McIrvin said he was proud of the way his team performed throughout this odd season.

“It’s weird for it to be over, here we are on April 9,” he said. “But it was fun to get out and play, great to have some people here (in the stands). It felt a little bit more like a Friday night.”