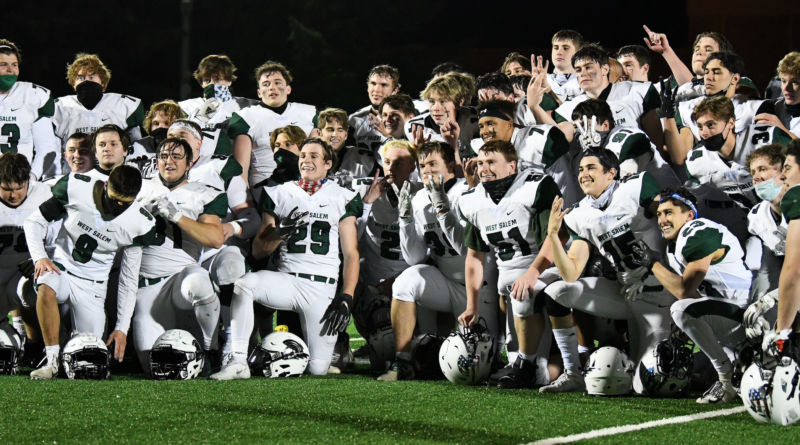 The players on the West Salem football team have been waiting for this season for a long time.

And, because of the COVID-19 pandemic, the Titans had to wait even longer than they expected.

But, as everything turned out, it was worth the wait — and then some.

West Salem wrapped up a perfect season, the first in school history, by scoring a 35-21 win over rival Sprague in a Mountain Valley Conference battle of unbeatens Friday at Sprague High School.

“It means a lot to us,” West Salem senior quarterback Jackson Lowery said. “We waited so long for this, and then we had to wait even more. We all wanted this so bad, and that made it even better.”

“It’s awesome. We all really wanted this,” said West Salem senior running back Nathan Garcia, who scored five touchdowns. “We’re the first undefeated team in West Salem history. We’ve been waiting for this season for a long time. I’m glad we got the opportunity to play it.”

“This was big. It was a really big win,” said West Salem senior defensive lineman Adrian McConnell, who had two sacks. “I’m going to cherish the feeling. I’m going to hold onto this forever.”

West Salem finished the season with a 6-0 record, including a 3-0 mark in Mountain Valley Conference play. The Titans were one of just four Class 6A teams — along with Mountain View, Sunset and West Linn — to finish the season 6-0.

“That was our mindset from the beginning,” Garcia said of having a perfect season.

“We’ve been waiting forever for this season. We were ready,” McConnell said. “It’s the first time ever, in school history. I know it was a shorter season, but it still means a lot to us.”

Sprague, which, like West Salem, entered 5-0, finished its season with a 5-1 record, including a 2-1 mark in Mountain Valley Conference play. The 5-1 record looks to be quite a step up for the Olympians, who finished 2-7 each of the previous two seasons.

“That feels really good after the last two years,” said Sprague senior running back Ethan Bullock, who ran for 138 yards and a touchdown. “We were glad just to have a season, and this was just icing on the cake.”

“It was a great time, with great teammates and great coaches,” Sprague junior quarterback Logan Smith said. “I can’t ask for anything more.”

The Olympians, like their rivals from West Salem, were fired up for Friday’s showdown.

“We came into it thinking we had a shot, and we were confident,” Smith said. “I was more fired up for this game than I’ve ever been before.”

Defenses ruled early, with Sprague junior Colton Herring ending a West Salem drive deep in Olympians territory with a fourth-down interception. But, late in the first quarter, the Titans — and Garcia — wouldn’t be denied.

Garcia, sprinting around the left side of the line, scored on a nine-yard run. Senior Cooper Johnson added the first of his five extra-point kicks, giving West Salem a 7-0 lead with 37.3 seconds left in the opening period.

The Titans struck again the next time they had the ball. A 24-yard run on a scramble by Lowery helped set up Garcia’s six-yard touchdown run — he broke away from an initial tackle attempt in the backfield — increasing the lead to 14-0 with 4:05 remaining in the second quarter.

Sprague, behind the power running of Bullock, answered right back. The Olympians moved 65 yards in 11 plays, capping the drive with a one-yard touchdown blast by Bullock, which cut the West Salem lead to 14-7 with 35.7 seconds before halftime.

Bullock gained all of Sprague’s 65 yards on the drive, coming on eight carries.

“I was fired up to play our rivals, and I’m just a hard runner,” Bullock said.

The touchdown seemed to give Sprague some momentum entering the second half, but the West Salem defense forced the Olympians into a three-and-out on the first possession of the third quarter.

On the Titans’ first play after a Sprague punt, Garcia broke through a hole in the middle of the line, cut to his right and sprinted to the end zone for a 43-yard touchdown, making it 21-7 with 10:15 left in the period.

But Sprague was anything but discouraged.

“We could have put our heads down after that turnaround,” Smith said. “But we kept fighting.”

In their ensuing possession, the determined Olympians put together a 79-yard scoring drive. A 10-yard scramble by Smith, on fourth-and-6, and a 14-yard run by Bullock, set up a one-yard touchdown toss from Smith to senior Carson VanKempen, trimming the West Salem lead to 21-14 with 3:55 remaining in the third quarter.

Now, it was West Salem’s turn to answer — and the Titans did, in a hurry.

A 34-yard completion from Lowery to senior Jerron Love set up another touchdown by Garcia, this one from 15 yards, pushing the West Salem lead to 28-14 with 2:13 left in the third period.

Persistent Sprague fought back again. A 14-yard pass from Smith to sophomore Drew Rodriguez, a 14-yard toss from Smith to VanKempen, an 18-yard run by Bullock and a nine-yard run by Smith on a crazy scramble where he looked to be trapped deep in the backfield before escaping, moved the ball to the Sprague 11-yard line.

Three plays later, the Olympians faced fourth-and-6 at the 7-yard line. On fourth down, Smith threw a perfect fade-pattern pass to Rodriguez in the left side of the end zone for a touchdown, making the score 28-21 with 5:01 to play.

West Salem then looked to run out the remaining time. The Titans appeared to be in good shape, with Garcia picking up a first down on a four-yard run to the Sprague 45-yard line with less than two minutes left. On the next play, Lowery gained seven yards on a run but lost the ball on a big hit by the Olympians. West Salem junior lineman Aydan Watson alertly fell on the loose ball.

That turned out to be one of the biggest plays of the game. On the next play, Garcia broke away for a 38-yard touchdown run, which gave the Titans a 35-21 lead with 1:24 to go.

The West Salem defense, with senior Jack Countryman getting a sack, didn’t allow Sprague to get a first down in its ensuing possession, wrapping up the win — and the perfect season — for the Titans.

“It was an awesome game,” Lowery said. “COVID or no COVID, this was a special thing to do, with a special group of guys.”

“It meant everything to us. Some of us have been together since first or second grade. This is the best feeling of the year,” Garcia said. “We’ve been waiting for this game for so long. It was intense, playing a rival when we’re both 5-0. I’m glad we got the chance.”

“We’re rivals, and now we can talk about this for years and years,” McConnell said with a smile. “This was super fun. There were some ups and downs, but I was excited to see (West Salem head coach Shawn) Stanley get excited.”

West Salem had 389 yards of total offense in 46 plays from scrimmage.

“Our dudes up front killed it,” Lowery said, referring to West Salem’s group of linemen, including junior Jaiden Dunton, senior Holden Whipple, senior Conner Moore, Watson and senior Isaac Barnecht, among others. “And we had some good athletes behind those dudes.”

Garcia rushed for 225 yards on 25 carries and crossed the goal line five times.

“That felt awesome,” Garcia said. “The blocking was great. Sometimes, I barely got touched.”

“It’s crazy,” Lowery said. “I grew up with that dude. For him to score five touchdowns tonight is a really big deal.”

Lowery completed 6 of 11 pass attempts for 100 yards. He ran for 56 yards on eight carries.

“This game was incredible. For two in-city teams to come into this game, both at 5-0, was awesome,” Lowery said. “This was so much fun. It was a cool thing.”

West Salem junior Zach Dodsen Greene had two catches for 48 yards. Love had two receptions for 40 yards. Garcia and senior John Kenny each had one catch.

For the West Salem defense, McConnell and Countryman each had two sacks and a pass deflection. Senior Jack Bennett added a sack.

McConnell had both of his sacks in the second half.

“I didn’t have a good first half, but the second half, I got going,” McConnell said. “I did my best.”

For Sprague, Bullock picked up his 138 rushing yards on 26 carries.

“It was really fun to play in this game. It was two heavyweights, fighting it out,” Bullock said. “It was a fantastic game. It was two big dogs, fighting for everything. If we play 10 times, each team might win five. But that’s the way it bounced today.”

“We knew it was going to be a fight, and I’m proud of our team. We feel that we can compete with anyone,” Smith said. “We wanted it so bad. We’ve all worked so hard to get here. Sometimes things don’t go your way, but we gave it everything we had. We played hard, and we never quit. We kept our heads up all game and kept fighting.”

Rodriguez had five catches for 64 yards. VanKempen had five receptions for 43 yards, and junior Jordan Jeffries had two catches for eight yards.

For the Sprague defense, Herring had an interception, senior Bryson Kievit had a sack and senior Brett Hassoun had a tackle for a loss and a deflected pass.