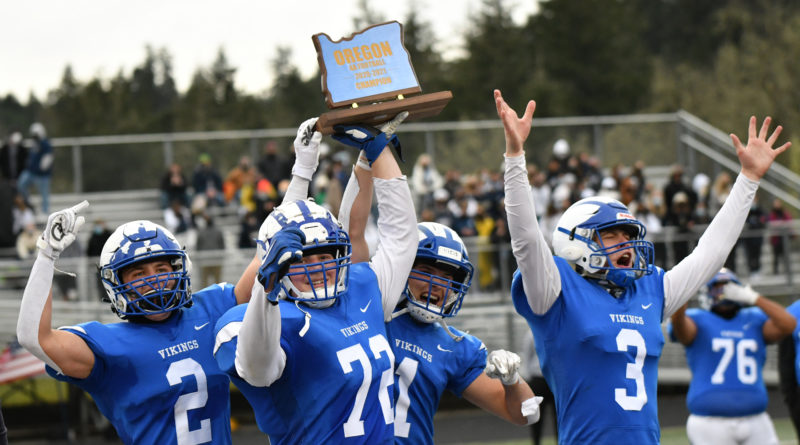 Clay Peden rushed for 153 yards and two touchdowns to power the Bowmen (5-1) past the Foxes (3-2) in Silverton.

Peden closed the season with more than 350 yards rushing and seven touchdowns in his final two games.

The Bowmen led 28-0 at halftime on their way to a fifth consecutive victory since a 14-9 loss to Newberg in Week 1. In their games since, the Bowmen allowed an average of 11.4 points and won by an average of 30.2 points.

Both of the Foxes’ losses were to Class 6A teams. Those teams — besides Sherwood, there was West Salem, in Week 1 — finished with a combined 11-1 record.

Cole Brosterhous intercepted a pass at Mazama’s 11-yard line with 1:53 left to preserve the Vikings’ win over the Spartans in the first-place game of the 4A Elite 8 Showcase at Cottage Grove High School.

The Vikings had made the score 21-21 on Tristan Lee’s eight-yard pass to Aidan Kindt 11 seconds before halftime.

The teams had relatively similar offensive statistics. The Vikings gained 346 yards of total offense to 326 for the Spartans (4-2) of Eugene. Marist Catholic did more of its damage through the air (200 yards), whereas Mazama rushed for 226 yards.

The Spartans’ Lucas Tuski rushed for 124 yards and two touchdowns, the second a 40-yard run that produced a 21-14 lead with 3:36 left in the first half.

Heaton carried 14 times for 110 yards, and Lee (8 of 11, 120 yards) had two touchdown passes, the first of which was a 22-yard connection with Brosterhous that put the Vikings up 7-0 midway through the first quarter.

Tuski’s first touchdown run made it 7-7, and a 60-yard connection between quarterback Joey Laing and Hagan Stephenson gave the Spartans a 14-7 lead with 10 minutes left in the half.

After the Vikings’ Colby Anderson scored on a one-yard run 5:31 before halftime, Tuski answered with his 40-yard score.

Kadin Bolanos recovered a fumble to account for Mazama’s other takeaway.

The Vikings ended the season allowing 8.3 points per game. They shut out three opponents and allowed more than one touchdown only to Thurston (the OSAA Class 5A champion in 2018 and 2019) and Marist Catholic.

The two losses the Spartans endured were by a combined eight points, including a 35-33 setback to Class 5A Silverton. Among the teams they defeated were Class 5A North Bend and two teams in the top 10 of last week’s SBLive media poll: No. 3 Marshfield of Coos Bay and No. 7 Cascade of Turner.

Dom Montiel passed for four touchdowns, and the Pirates rebounded after Gladstone scored 12 seconds in to defeat the Gladiators in the third-place game of the 4A Elite 8 at Cottage Grove High School.

Sabastian Peiffer ran 38 yards for a touchdown on the Gladiators’ first possession, and his two-point conversion run made it 8-0. It was almost 3½ quarters before Gladstone (5-1) scored again.

Montiel passed for touchdowns of 11 and 13 yards to DJ Daugherty to stake the Pirates (5-1) to a 14-8 lead five minutes into the second quarter. Short touchdown runs by Noah Niblett and Montiel pushed Marshfield of Coos Bay to a 27-8 halftime lead.

After a scoreless third quarter, the Pirates went ahead 34-8 on Montiel’s 14-yard pass to Mason Pederson.

Another touchdown run by Peiffer made it 34-14 midway through the fourth. The teams traded touchdowns after that — Montiel passing to Ezra Waterman and Gladstone’s Brayde Owen passing to Jude Ashpole — to account for the final score.

Montiel completed 28 of 40 passes for 358 yards. Niblett was the Pirates’ leading receiver with 11 catches for 195 yards.

Montiel finished the season with 22 touchdown passes, with at least three in all six games. Daugherty had 10 touchdown catches this season.