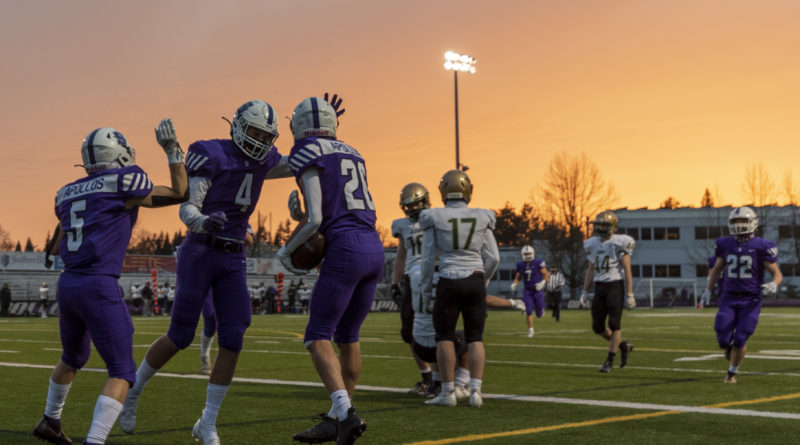 Here is an inside look at the top high school football games across the state of Oregon this week (April 8-10).

The Dragons were hoping for a chance to show their 5-0 record isn’t just smoke and mirrors. They’ll get their shot against the two-time defending Class 5A state champion Colts, who rebounded from having their 20-game win streak snapped by Mazama with a 45-31 victory over Sheldon.

In an ideal world, this matchup and the following one would be appetite-whetting semifinals of a BCS-style playoff to end this spring season (although three unbeaten Mountain Valley teams might beg to differ). The game features a contrast in styles between the Tigers’ wing-T powered by Price Pothier (299 yards, three TDs vs. Mountainside last week) and the Lions’ pro-style offense led by seniors Blake DeBisschop (13 TD passes) and Gavin Haines (10 rushing TDs).

And here’s what would have made for the perfect second semifinal, featuring Class 6A’s highest-scoring offense (Sunset at 40.6 points per game) and stingiest defense (Central Catholic at 8.2 points per game). Apollos senior Kyle Jaekel has 14 touchdown passes without an interception this season, including three in last week’s win over Jesuit that snapped the program’s 26-game losing streak against the Crusaders.

The Olympians haven’t defeated the Titans since 2015 and haven’t won the capital city championship — beating all five other Salem-area teams in the same season — since 2013. Both teams are 5-0 and the winner will seize not just city bragging rights but precious momentum entering a fall 2021 season in a reunited Mountain Valley Conference.

In this matchup of Three Rivers League rivals, which team can build momentum off a Week 5 rivalry victory to carry into the short offseason? The Timberwolves ended a five-game losing streak to Tigard, while the Lakers won the Battle of the Lake against crosstown Lakeridge. Both are led by a junior quarterback — Jackson Jones (Tualatin) and Jack Layne (Lake Oswego) — having a strong season.

Both teams enter their first regular-season meeting since 1978 coming off a difficult rivalry defeat. The Cavaliers fell to Mt. Hood Conference nemesis Central Catholic 14-7, nearly knocking off the defending Class 6A state champion, while the Tigers lost 34-10 to district rival Tualatin.

Two teams that never found their footing during the spring season look to enter the offseason with a victory to get them to .500. The Democrats might be without star running back Damir Collins, who suffered a left wrist injury in a Week 4 loss to Westview and played sparingly last week against Grant.

Two surprising 4-1 teams finish the season in Southwest Portland. The Cardinals opened their season on the same field and lost 13-0 to Jefferson but averaged nearly 29 points in their next four games. The Jaguars bounced back from a Week 4 loss to Liberty to defeat Madison 48-6 last week.

The Cougars try to finish a regular season unbeaten for the fifth time since 2007 by completing a season sweep of their crosstown rival. Mountain View won the first meeting 33-21 at home for a fifth consecutive victory in the series, but coach Brian Crum takes nothing for granted. “Bend gets better every week,” he said. “It was a slugfest the first time and always is.”

Cascade and Banks finished No. 5 and No. 6 in the final Class 4A committee rankings used to determine Week 6 matchups. Cascade scored its most points in a game since 1972 during a 71-12 rout of Sweet Home last week, while Banks romped to a 49-8 victory over Tillamook.

The reigning Class 3A state champion Eagles tackle the Cougars in a Special District 2 championship game matching two of the four undefeated teams in the classification. The scoreboard operator should be plenty busy in this one — Santiam Christian hasn’t skipped a beat this season, averaging nearly 47 points per game in steamrolling to a 5-0 record, and Cascade Christian scores almost 46 points per game.

A matchup between the 2017 and 2018 Class 2A state champions. The Dragons are 5-0 with the third-highest scoring offense in Class 2A, averaging 38.6 points per game. The Trojans’ only defeat came in Week 1 to defending Class 3A state champion Santiam Christian; they’ve handed rivals Regis and Salem Academy their only defeats this season.

Two teams that would have harbored championship aspirations in a normal season finish this anything-but-normal campaign with the Foxes coming back from COVID-19 quarantine just in time to play one last game. Neither team has lost since Week 1, with the Bowmen blasting Liberty 62-20 last week.

No. 3 and No. 4 in the final Class 4A committee rankings make up the matinee of a powerhouse doubleheader to finish the season. The Gladiators feature a punishing running attack led by senior Sabastian Pfeiffer, who has rushed for more than 1,000 yards in five games. Pirates quarterback Dom Montiel has thrown for a Class 4A-leading 1,353 yards and 18 touchdowns.

While the state championship isn’t officially on the line in this matchup of No. 1 and No. 2 in the final Class 4A committee rankings, this game will certainly have a championship vibe. The Spartans earned their way into this game by beating Sky-Em rival Marshfield 39-21 last week; the Vikings already have marquee wins over Banks and Thurston.