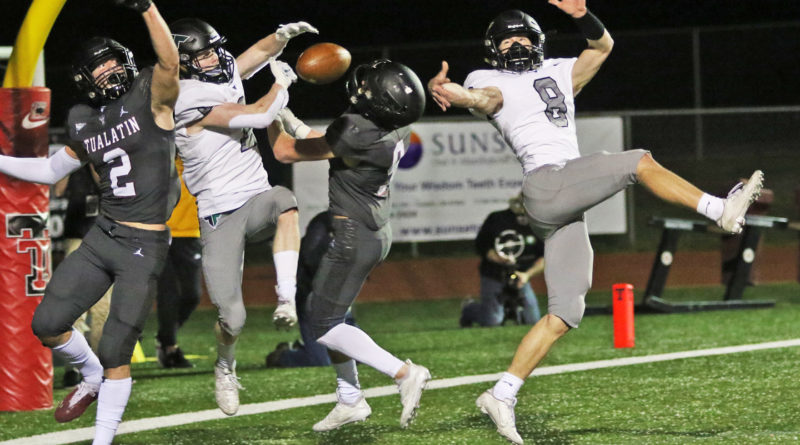 It’s been a different type of high school football season in Oregon.

That very well could be an understatement.

Yes, for the most part, things are vastly different. But there is one thing that’s the same — that would be the amplified intensity in the air when the rival Tigard and Tualatin squads clash on the gridiron.

“It’s unlike any other, if you ask me,” Tualatin junior quarterback Jackson Jones said of the rivalry. “It’s probably the best rivalry in the state. Anything can happen when we play them, and it feels amazing to come out on top.”

“In a weird season like this, it’s good to have a form of normality, and to play our rivals. That had everyone fired up for this game,” Tigard junior tight end/linebacker Elijah Jackman said. “I came out a little harder than normal. This was pretty big for us.”

For the first time since 2015, the Timberwolves got to celebrate after a game between the rivals, as they posted a 34-10 win over Tigard in the Three Rivers League contest Friday at Tualatin High School.

“It means everything,” said Tualatin junior receiver Cole Prusia, who had two touchdown catches in the victory. “We’ve been fighting for this for so many years. I’ve only been here for two years, but I know this rivalry has been going on for 20-plus years. It means a lot to everybody.”

When it comes to big-school football rivalries, there certainly are some good ones in Oregon. In the Three Rivers League alone, you have Lake Oswego and Lakeridge in the Battle of the Lake, and West Linn and Oregon City in the Battle for the Bridge. There’s also the Holy War between Central Catholic and Jesuit. In the southern part of the state, it’s the Black and Blue Bowl between North Medford and South Medford. When they were in the same classification, and the same league, it was hard to find a rivalry more fierce than the one between Sherwood and Wilsonville.

But, if you ask players from Tigard and Tualatin, they’ll put their rivalry up against any other.

“Oh, I think it’s No. 1 in the state,” Tualatin junior running back Malik Ross said. “Cameras are on, everyone is here, you have to show up. That also motivated us a lot tonight.”

“I think this is one of the top rivalries in the state,” Tigard senior receiver/defensive back Spencer Kuffel said. “We compete with each other every year. In the TRL, it’s one of the best leagues in the state, and every time you step onto one of these fields — Tualatin, West Linn — it’s always going to be a battle.”

The rivalry started in the fall of 1992, when Tualatin High School opened. Before that year, high school students in the Tualatin area went to Tigard.

Jones knows all about that, even though it happened before he was born.

“It used to be one high school, combined, and when it split, it started a rivalry,” Jones said. “Whoever wins this game has the title of the town.”

Going into Friday’s game at Tualatin, Tigard held a 15-9 advantage in the series. The Tigers also took a five-game rivalry winning streak into the contest. Included in that Tigard win streak was maybe the craziest of the games between the rivals when, on Oct. 27, 2017, the Tigers got a 28-6 win in a game that started at Tigard High School, but, after a power outage hit Tigard, was moved to and finished at Tualatin High School. The Tigers also notched a 38-17 Class 6A state playoff win over the Timberwolves that year.

The teams’ previous game to Friday, in 2019, saw Tigard record a 23-21 home victory on its way to claiming the Three Rivers League championship.

All of that had the Timberwolves, whose last win in the series was a 28-14 victory Oct. 30, 2015, at Tualatin High School, extremely fired up for Friday’s game.

“We put our blood, sweat and tears into this game,” Ross said. “We worked so hard for it, and it really paid off. We came out and got the ‘dub.’”

Jones, in his first year as Tualatin’s full-time starting quarterback, came up big for the Timberwolves in the rivalry contest. He completed 18 of 27 pass attempts for 243 yards and three touchdowns. Prusia continued his big junior season, making eight catches for 153 yards and two touchdowns. He had a third touchdown nullified by penalty.

Ross ran for 70 yards and two touchdowns on 15 carries. He also had a 39-yard completion on a halfback pass and returned two punts for 31 yards.

“We don’t want to be on social media, getting our butts kicked. So, it’s good to be on top, and everybody knows about it,” Ross said.“Oh, this was so fun. We celebrated — six years, and we finally came out with a win.”

“It’s definitely meaningful,” Kuffel said. “We’ve gone 5-0 against them. We wanted to keep that tradition going. But they definitely had this circled on their calendar.”

For Kuffel, even though he wanted a different outcome, Friday’s rivalry game was special, because it’s the first Tigard-Tualatin varsity football game he got to play. Two years ago, as a sophomore, he suffered a season-ending knee injury before the Tigers faced Tualatin. He missed his junior season because of another knee injury.

“It’s good we got to play them. It’s super fun,” Kuffel said. “I’ve never played on this field before. It’s my first time. I’ve played up there (an upper field at Tualatin High School), but it’s the first time playing here, with all of my friends, so it was great.”

The rivalry should keep its intensity in the fall. With players such as Jones, Prusia, Ross, junior receivers Peter Burke and Kellen Hale, junior defensive back Noah Ogoli, junior tight end/linebacker Max Clanton, sophomore defensive lineman Richie Anderson, junior lineman Nico Webb and junior defensive end Jackson Biedritzky, among others, all potentially returning, the Timberwolves not only have the look of a Three Rivers League contender, but also that of a team that belongs in the conversation of being the top team in the state.

“I’m looking forward to next fall,” said Jackman, who had four catches for 35 yards, as well as a sack, during Friday’s game at Tualatin. “We know all of our flaws from this season. It wasn’t perfect, of course, but we know what we need to get better at, and we’re going to execute on that, hopefully.”