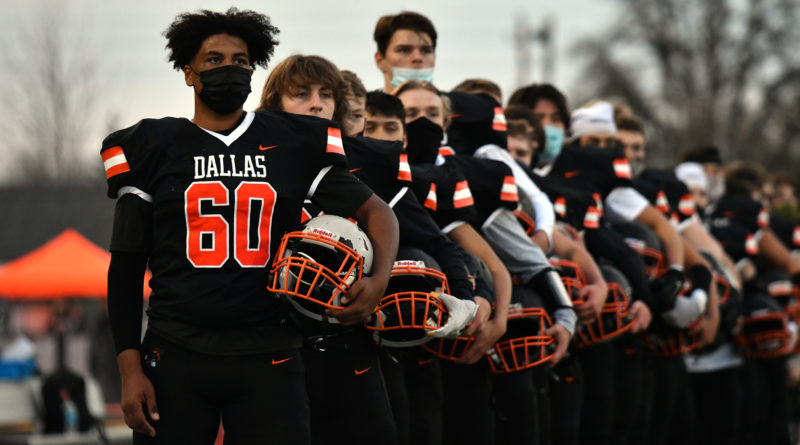 Sustained success is largely a matter of focusing regularly on the right things and making a lot of uncelebrated little improvements every day.

Sustained success has been hard to come by for the Dallas football program. Over the past 30 years, the Dragons have not had more than three consecutive winning seasons, and their last 10-win season came in 1987.

The typical pattern has them winning eight or nine games in a year, followed by a steep decline after that senior class graduates, taking several seasons to build back to that one shining moment.

Since Ron August retired in 1988 after a 9-4 season, 10 coaches had tried to build sustained success at Dallas, to buck the seemingly inevitable rise and fall.

Andy Jackson became the 11th coach to succeed August in 2018, and he knows the inherent difficulties of winning in Dallas — one of the smallest schools in Class 5A, stuck in a conference with powerhouse programs such as Silverton and West Albany.

Still, he’s confident he’s cracked the code for sustained success at Dallas, and in its simplicity, it sounds similar to Levitt’s prescription — just get better every day and don’t look past that day’s practice or game.

“Our goal as a team is to find our best level of football, regardless of who the opponent is,” the 34-year-old Jackson said after his team put up 50 points and reached 5-0 for the first time since 2000 with a 50-6 victory over South Albany on Friday.

“When you watch our program, you know we are all on the kids constantly about picking each other up, supporting each other and focusing on the team aspect. Our approach has worked well, and I think our leaders have led us in that approach.

“We’re trying to develop a positive culture of kids that work hard and support each other. When you listen to our coaches at practice, our energy is extremely positive, and rarely do you hear us yelling or attacking kids. It’s mostly a lot of positives and creating an atmosphere that kids want to be in. I think it’s paid off for us because our kids enjoy coming to practice.”

Sustained success comes only when you take what’s unique about you and figure out how to make it useful.

The Dragons went 6-4 in 2019 and made the playoffs for the first time since 2016 with a senior-laden roster. They graduated 17 all-conference selections and this season incorporated numerous first-year starters into the lineup.

Usually at Dallas, that would lead to a slow rebuild, looking down the road a couple of years to when the next stellar class would come through.

Instead, the Dragons have built upon last season, albeit with a schedule that doesn’t include Silverton or West Albany, both of which made the 2019 Class 5A semifinals. Dallas has defeated Class 6A South Salem and ended a five-game losing streak to Lebanon, another top Mid-Willamette team, entering a season-ending showdown with Thurston on Thursday night that came about after Polk County rival Central was forced to cancel over the weekend.

“To be honest, most teams that lose that many seniors have kind of dropped off,” said junior quarterback Ashton Foster. “But we just worked hard, stayed consistent, and it’s all paying off right now.”

This season’s seniors were freshmen and sophomores when the Dragons posted back-to-back 2-7 records following the program’s 9-3 campaign and run to the state semifinals in 2016. Jackson credited the seniors with playing a large part in the team not backtracking this spring, but senior running back/linebacker John Hofenbredl put a lot of the credit back on the coach.

“When Andy started as head coach, he really took authority of it,” Hofenbredl said. “We’ve had way better coaching, and he took charge of it. After that 2016 run and that first year of him coaching, we took a really, really big step, and that’s where we’ve ended up now.”

One change Jackson made came toward the end of the 2015 season when he was still defensive coordinator for his father, Tracy. He adopted a 3-5-3 defensive scheme that he has spent the next six years refining.

“It’s different, and it took some time to learn it,” Hofenbredl said. “But after that, we just took off with it. We’ve established our defense very, very well. That’s now one of our main things. We fly to the ball. We’re physical. That’s what we are.”

On offense, Jackson has proved adaptable. He still uses the wing-T as the base offense, but with Foster under center this season, he’s installed some spread into the attack to take advantage of Foster’s two-way skill set.

On most pass plays, the Dragons have Foster rolling out in RPO (run-pass option plays) that lessen the stress on an inexperienced offensive line while placing maximum pressure on defenses contending with a speedier attack than a season ago.

The result has been an egalitarian offense that involves just about every skill player on the roster. On Friday, 15 players had at least one carry or one catch — and that was before the Dragons emptied the bench in the second half with the lopsided score — and none had more than senior Chase Brushe’s six (four catches, two rushes).

“I can trust every single receiver we have,” Foster said. “It’s not like I have one guy and I pick them all the time. We have a whole bunch of players that will go and make plays.”

Jackson added, “We’re able to move the ball around a lot, which has made us difficult to defend because we’re not just a one- or two-person team that people can really key on. We can utilize a lot of formations, and Ashton has been very versatile in what he can do. He’s very accurate, and we try to put him in a position to be successful with our play calling.”

Instant success is never possible. Competence results only from sustained, consistent, self-disciplined effort over an extended period of time.

Since his playing days as a two-time all-conference defensive back at Western Oregon, Jackson has known he wanted to follow in his father’s footsteps and become a high school football coach.

After Tracy left Dallas in the summer of 2018 to take the coaching job at Madison (Andy’s alma mater) in Northeast Portland, Andy went from defensive coordinator to first-time head coach.

That family connection remains strong. Andy’s older brother, Matt, is his offensive coordinator, and Tracy is back in the fold, coming in a couple of days each week to serve as an offensive assistant working with the running backs.

That familial feeling flows through the program’s veins. Andy and Tracy talk almost every night, providing, Andy says, “a great sounding board for me in my development.” Matt and Andy have worked together at Dallas since Andy returned from a year in Europe playing professional football after college. Longtime assistant Triston Ringhouse moved up to defensive coordinator when Andy became the head coach in 2018.

Together, they’ve created a culture that Jackson believes can withstand graduation losses and smaller enrollment numbers than many of their rivals.

“We try to be as positive as possible, and I think that’s really been big for our group,” he said. “They feed off those things, and I think the players truly believe that we believe in them. Once we got the green light to start training on July 1, our kids have trained all the way through. We have some really dedicated kids, and it burns in them to be successful.

“I’m just fortunate to have good players, good coaches and good support here. Trying to create a positive atmosphere and that positive culture of hard work and creating a place that people want to be at, I think those are things that have been successful for us.”

The one great element in continuing the success of an offensive is maintaining the momentum.

The Dragons would have loved a shot at a long playoff run that would have added to the momentum they’ve built during the spring season.

They thought they’d end their season against their archrivals down Highway 99W, but when the Panthers had to cancel, Dallas scrambled Monday to find a replacement game. When a chance to play two-time defending Class 5A champion Thurston came available, the Dragons pounced.

“Today was a crazy day for us,” Jackson said Monday evening. “We had options, but we chose Thurston because ultimately, we want to play the best. It’ll be a tremendous challenge for our program. They’re big, fast, physical — the real deal. It’s a golden opportunity for us, but we’ve got a huge task ahead of us.”

A strong showing against the Colts would further accomplish what Foster said was a season-long objective for the program.

“Our goal this year was to put Dallas on the map,” he said, “and I think that’s what we’re doing right now. After this season, everyone’s going to know who Dallas is.”

Maintaining the momentum requires more than just a one- or two-year run, however. It means that when this senior class of 12 players graduates, the Dragons have the players in place to keep it going in a full season against the perennial powers in Class 5A.

“We’re just going to keep the same vibe going,” Jackson said. “Hard work, supporting each other, having the coaches pick each other up or pick the kids up and be positive with them. And we’ll take everything one day at a time. It’s hard for me to even talk about next year because that’s so far away, but if we focus on what we’re focusing on right now, continue to build our culture, I think we’ll be in a position to be pretty competitive again.”