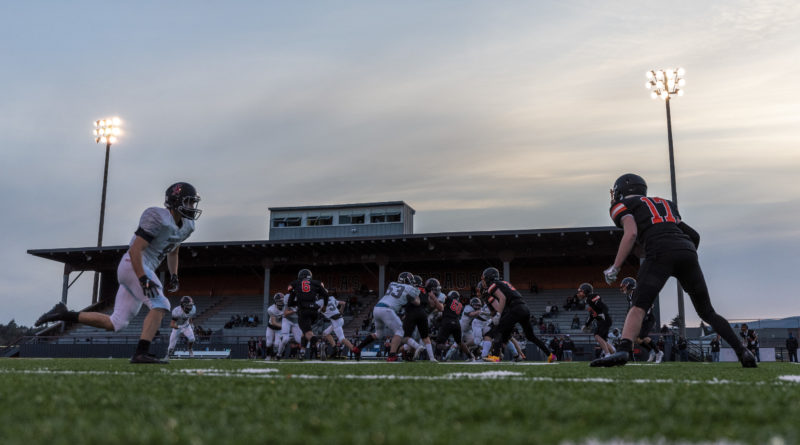 Here are five things that stood out during the fifth weekend of action.

We won’t have state playoffs to finish the six-week spring football season, but coaches and athletic directors have arranged some high-powered games for us to enjoy.

The culminating weekend of the season opens with a bang with a game put together Monday afternoon as unbeaten Dallas travels Thursday night to face two-time defending Class 5A state champion Thurston. The Dragons initially were slated to play county rival Central this week, but the game was canceled Monday morning, leaving Dallas scrambling to find an opponent.

Friday brings several exciting games in Class 6A, a few involving league foes that already had their games scheduled — including unbeatens West Salem and Sprague in the Mountain Valley and Three Rivers rivals Tualatin and Lake Oswego.

Other top 6A matchups on the final Friday of the season include Clackamas at Tigard, Grant at Mountainside and Jefferson at Jesuit. There are some 6A-5A crossover games of note, such as Wilsonville at Barlow, Lebanon at Lakeridge and Grants Pass at North Bend.

The smaller schools also have some big-time games on tap Friday night, including Santiam Christian at Cascade Christian, Amity at Heppner and Cascade at Banks. A number of 2A and 1A schools, though, finished their seasons to allow their student-athletes who play multiple sports the full week to transition to Season 3 sports (baseball, softball, track and field, tennis and golf).

The season finishes Saturday with a matchup of the top two Class 4A teams as determined by a panel of coaches, with Marist Catholic taking on Mazama in Cottage Grove. The Nos. 3 and 4 teams in the rankings, Marshfield and Gladstone, also are set to play Saturday afternoon in Cottage Grove.

The season’s final game kicks off Saturday night when Silverton returns from COVID-19 quarantine in time to face Sherwood in a matchup of former 5A rivals.

The unofficial title of Salem city champion will be on the line Friday night when Sprague plays host to West Salem in a matchup of 5-0 teams. Each has defeated the other four city teams (McKay, McNary, North Salem and South Salem).

The Olympians enter fresh off another rivalry win, defeating South Salem 63-28 in a neighborhood matchup that decided bragging rights for the remainder of the spring.

“South vs. Sprague is a pretty big deal here,” Sprague coach Jay Minyard said. “A lot of these kids go to middle school together, and they all know each other.”

Coming off back-to-back 2-7 seasons, starting a season 5-0 for the first time since 2015 has meant a lot in restoring the luster of a program that won a state championship in 2004 and played for the 2005 title.

“Being 5-0 just gives our kids the confidence that they needed coming into the season to realize that they are good enough to compete with teams like West Salem,” Minyard said. “Any time you can have a season like this, it helps in building excitement in the program and can help with getting more kids to turn out at all levels.”

Minyard also has been pleased with the development of first-year starting quarterback Logan Smith. The junior shined in 7-on-7 drills, but Minyard wanted to see how he’d fare facing live action.

“He’s learning to take what the defense is giving him,” Minyard said. “It’s not 7-on-7, where you have all the time to throw and no rush to worry about. You have to understand protection and be able to get the ball off quickly, and he’s done a great job of working on this over the past few months.”

Jay Minyard photo by Chase Allgood, for The Oregonian/OregonLive

While this one-off (everyone hopes) spring season provided the opportunity for the Salem schools to hold a round-robin to decide city bragging rights (McKay and North Salem play in the Class 5A Northwest Oregon Conference for football), the annual Black and Blue Bowl once again decided who held mastery over Medford.

South Medford erased deficits of 27-7 after three quarters and 34-21 with 6:05 to play to stun crosstown rival North Medford 35-34 in the 35th edition of the city matchup.

Panthers coach Bill Singler was quick to point out in an email Sunday evening that the craziness of the season didn’t add any extra significance to the matchup because “there’s always significance in a crosstown rivalry game, no matter the circumstances — especially in a city with two big public schools.”

Sophomore quarterback Deacon Edgar, playing in his first Black and Blue Bowl, concluded his fabulous debut season (South Medford is not scheduled to play in Week 6) with another strong performance, finishing 13 of 24 for 225 yards and two touchdowns and running for the winning score from seven yards with 29 seconds to play.

The Panthers didn’t get the chance to extend their streak of playoff appearances, which remains at 13, but Singler has found a couple of backfield mates in Edgar and junior running back Carson Joe with whom he can challenge North Medford and Sheldon for Southwest Conference top honors in the fall.

“Deacon got valuable experience as our starter this short season,” Singler said. “Carson emerged as a strong ball carrier for us as well.”

Every football coach around the state has emphasized the importance of having had the opportunity to play this spring, even if there were no playoff berths or league titles on the line.

None, though, felt the need to get on the field for even a short while quite like North Bend coach Gary Prince.

On May 31, Bulldogs junior Ian Spalding fell from rocks near Sunset Bay along the Oregon Coast. The U.S. Coast Guard and Coos County Sheriff’s Office spent the next couple of days searching for his body, eventually calling off their official search as teammates and fellow students continued in vain.

“We lost a great friend and teammate,” Prince said. “Ian did so many things for us offensively, defensively, but most importantly as a leader and by just being a great all-around human being.”

The Bulldogs take a 3-2 record into their finale Friday against Grants Pass, but the wins and losses have taken a back seat to the catharsis of getting back on the field.

“It was important to each of us to have the opportunity to play football this season and to try to honor him as best as we can,” Prince said. “All of us think of Ian often. He is missed greatly.”

Heading into the offseason, Prince identified a couple of juniors who have emerged as potential cornerstones for the fall campaign. Sidon Green has taken over as the lead running back while continuing to develop as an inside linebacker, and Trevor Henderson has played well at offensive tackle and defensive tackle.

North Eugene was supposed to get a fresh start this season, taking advantage of the OSAA’s rule change from a couple of years ago that allowed teams that have struggled in their classification to move down for a minimum of two years to rebuild their program.

The Highlanders certainly met all the criteria. Since going 11-1 and reaching the Class 4A quarterfinals in 1992, they’d had two winning seasons — including a 7-2 mark playing an independent schedule in coach Rick Raish’s first season in 2015, more victories than they accumulated over the next four seasons combined (6-30).

The pandemic ruined their plans, however. Instead of playing a 4A schedule, the Highlanders ended up in a Eugene-based league, playing three of their Midwestern League rivals (Willamette, Churchill and Springfield) along with two out-of-area 4A schools (Woodburn and Phoenix).

North Eugene defeated its two 4A opponents and beat Springfield 35-14 on Friday — only its third victory over the Millers in the past 20 years — to finish its season 3-2.

While the Highlanders relied heavily upon several seniors this season, they also had a couple of juniors emerge who will be counted on when they join the 4A Sky-Em League full-time in the fall.

Quarterback Cade Johannsen received action in four of the five games, going 15 of 30 for 124 yards and a touchdown, and Nolan Wyers was the team’s top receiver with 26 catches for 400 yards and three scores.

Outside linebacker Michael Warren (37 tackles, three sacks) and defensive end Nathan Cook (29 tackles, five sacks) should anchor an improved defense that posted its first shutout in the past five seasons in a 40-0 victory over Phoenix in Week 4.