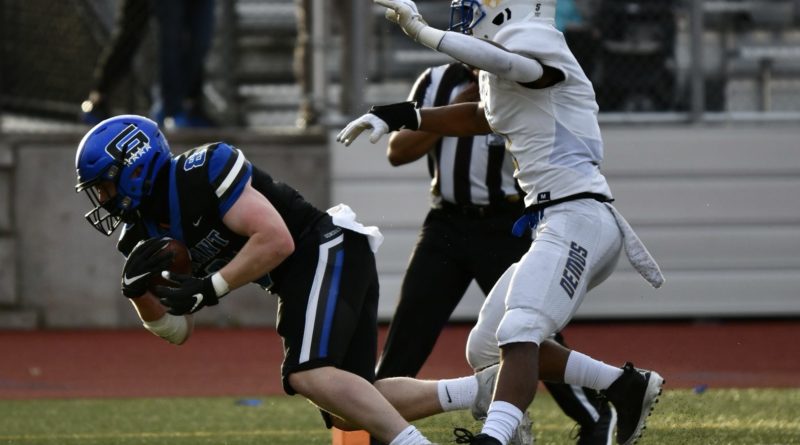 Luke Ash ran for 203 yards and a touchdown and cornerbacks Keontae Johnson-Gibson and Kemeatrous “KJ” Johnson-Gibson were strong on pass defense, but the Rams (5-0) got the go-ahead score with 2:10 left to deny the host Cavaliers (3-2).

Central Catholic of Southeast Portland, the reigning OSAA Class 6A champion, won for the 14th consecutive game. The margin of victory matches the Rams’ lowest during their win streak.

Luke Johnson’s 11-yard touchdown pass to Stryder Todd-Fields broke a 7-7 tie. On a third-and-six play, Todd-Fields lined up to the far right of the line of scrimmage. After the snap, Johnson rolled to his right and threw across the field to Todd-Fields, who had lost his defender and hauled in the pass in the shallow part of the left side of the end zone.

Ash had 32 carries, the most important of which was a 19-yard touchdown that tied the score with 1:33 left in the third quarter. Ash has rushed for 484 yards and five touchdowns in his past three games.

The host Generals (3-2) raced to a 35-6 halftime lead in the win over the Democrats (2-3) of North Portland in a game at Franklin High School in Southeast Portland.

Luke Borchardt had two receiving touchdowns in the first half, Timon Davis had a scoring catch, and Max von Arx scored on a blocked punt for Grant of Northeast Portland.

Dondrae Fair connected with Anthony Lamberth, a freshman making his first varsity start, for a 35-yard touchdown pass for the Democrats, who had six starters out or severely limited because of injuries.

Oregon State-bound running back Damir Collins was among the Jefferson players injured. He was limited to a handful of snaps and couldn’t carry the ball.

DJ Jamison had a late touchdown run for the Democrats, whose defense was led in tackles by Lamar Washington and Jason Davis. Caleb Harvey had a fumble recovery for Jefferson.

The Skyhawks built a 14-0 lead before the Scots’ first offensive snap in the victory over host David Douglas of Southeast Portland.

After Mitchell’s touchdown on the Skyhawks’ first possession, the Scots (1-2) fumbled the kickoff, and the Beaverton team went up 14-0 on the first of Robert Marquez’s two touchdown runs.

Kirk’s touchdown made it 21-0 in the first quarter. The Skyhawks (2-3) led 28-7 in the fourth quarter when quarterback JC Klee found Gutierrez behind the middle of the defense for a touchdown pass.

Scots quarterback/safety James Haman had 12 tackles. Three times the Scots drove inside the Skyhawks’ 20-yard line, but the threats ended with two interceptions and a turnover on downs.

Jack Franzen had two first-half touchdown runs, and the Cardinals defeated the visiting Roughriders (1-4) of North Portland in a game at Wilson High School in Southwest Portland.

Lincoln (4-1) of Southwest Portland matched its season high in points. Since a shutout loss in Week 1, the Cardinals have averaged 28.8 points per game.

Sakari Haynes scored for the Roughriders, who got a passing touchdown from TJ Jackson to Dominique McDonald-Barber.

A 97-yard score was the longest of Jayden Brannan’s three touchdown runs as the Trojans of Southwest Portland defeated the visiting Warriors (0-5) of Southeast Portland.

Brannan, who has signed a letter of intent with FCS Portland State, also scored from 45 and 28 yards. Rolin Griffiths, Andy McCorkle and Logan Moses also had touchdown runs for the Trojans (2-3).

Parker Feld-Gore passed for two touchdowns, both to Cole Thomas.

Daniel Suhr (four catches, 114 yards) was a bright spot in the receiving game for the Warriors.

Adrian Mashia Jr. scored three touchdowns, all on plays of more than 55 yards, to highlight the Warriors’ win over the host Lightning (4-1) of Southeast Portland.

Mashia Jr. scored on a 70-yard punt return and on catch-and-run connections with quarterback Tanner Volk that covered 57 and 89 yards. The punt return touchdown was Mashia Jr.’s second special-teams score of the season; the other was an 84-yard kickoff return two weeks ago at Century of Hillsboro.

Franklin’s Zander Garner had a season-high three touchdown passes, two to Beckett Parker-Lisk and one to Isaiah Rickard.

Volk finished with three touchdown passes and a touchdown run for Aloha (3-2).

Reece McKenzie returned a punt for a touchdown in the Bruins’ win over the host Raiders (2-2) of Troutdale.

Miles Wilson ran for two first-half touchdowns for Reynolds, which trailed the Bruins (3-2) of Gresham 28-14 at halftime.

A running game that piled up 334 yards helped the Eagles of Gresham defeat the visiting Broncos (1-4) of Northeast Portland.

Kobe Hein rushed for 123 yards and Akari Harris gained 105 to lead the ground game of Centennial (1-2).

Centennial quarterback Hayden Boyd was 10 of 19 for 100 yards with an interception and gained 37 yards on the ground. Kahleb Cope had 33 receiving yards to top the Eagles in that category.

Dylan Lee scored the go-ahead touchdown in the fourth quarter, Charlie Rawlins had a late interception to quash a threat, and the Panthers (4-1) won in Milwaukie over the host Falcons (3-2).

La Salle Prep led 13-7 in the first half but couldn’t exploit opportunities to get some distance on the Panthers, whose previous three wins were shutouts.

Redmond coach Seth Womack credited his offensive line for allowing the team to control the clock in the second half. The Panthers held the Falcons to 19 points below their season average.

Rawlins added to an already lofty season total for interceptions. He entered the game tied for second in Class 5A with three.

Luke Patterson scored four touchdowns (two receiving and two rushing), Lucas Tuski ran for two fourth-quarter scores, and the Spartans of Eugene pulled away from a 12-7 halftime lead to defeat the visiting Pirates (4-1) of Coos Bay in a matchup of Class 4A powers.

Kaiden Ayoma had two interceptions for the Spartans (4-1), whose only loss was by two points to Class 5A Silverton (3-1).

The Pirates took a 13-12 lead on Montiel’s touchdown pass to Pierce Davidson. Marist Catholic then seized control, getting two touchdown runs by Patterson and the first of Tuski’s scoring runs, for a 32-13 lead.

Montiel added a third touchdown pass, to Noah Niblett, midway through the fourth quarter to make the score 32-21.

The Warriors (4-1) turned a 7-0 lead into a two-score game with an interception-return touchdown with four minutes left and defeated the visiting Eagles, who end their season with a 1-4 record.