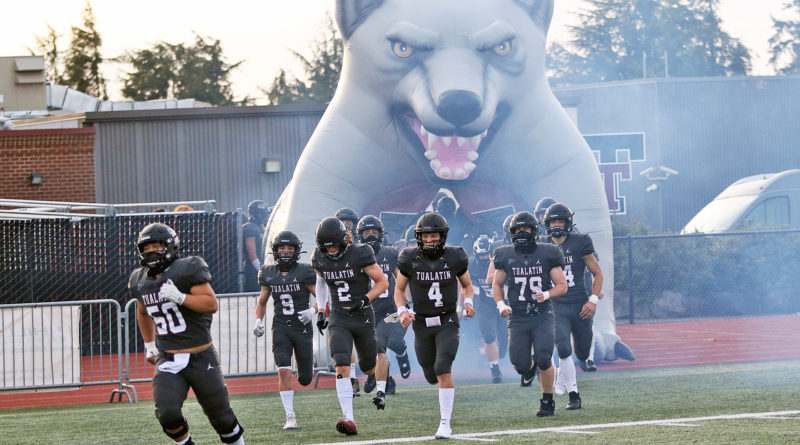 The Tualatin football team has been waiting.

Well, that wait finally came to an end. And the Timberwolves couldn’t be happier about it.

Tualatin ended its five-game losing streak against rival Tigard in impressive fashion, getting a 34-10 win over the Tigers in a Three Rivers League game Friday at Tualatin High School.

“It means everything,” said Tualatin junior quarterback Jackson Jones, who passed for 243 yards and three touchdowns in the victory. “Growing up, across town, and we haven’t beaten them for almost six years, and with people calling us ‘South Tigard,’ we’ve been motivated all week to beat them. And it feels amazing.”

“We’ve been fighting for this for so many years,” said Tualatin junior receiver Cole Prusia, who had two touchdown catches. “I’ve only been here for two years, but I know this rivalry has been going on for 20-plus years. It means a lot to everybody.”

Going into Friday’s game, the Timberwolves had lost their past five games with the rival Tigers. That streak included both a regular-season loss and a Class 6A state playoff setback in 2017, and a 23-21 defeat in the teams’ last meeting, in 2019 at Tigard High School. Tualatin’s last win in the series was a 28-14 victory Oct. 30, 2015, at Tualatin High School, meaning the Timberwolves had gone more than five years and five months since they had tasted victory against the Tigers.

“We haven’t got a win against them in almost six years, so to come out and do that means everything,” said Tualatin junior running back Malik Ross, who ran for two touchdowns. “We put our blood, sweat and tears into this game. We worked so hard for it, and it really paid off. We came out and got the ‘dub.’”

With the win, its fourth in a row, Tualatin improved to 4-1 overall and 3-1 in TRL play, putting the Timberwolves in second place in the league standings.

“We know we have to come ready to play,” Ross said. “The seniors, it’s their last chance to play high school football. To be honest, a lot of us juniors are playing for this year for our seniors. We want them to go out on a good note.”

Tigard moved to 1-3 in Three Rivers League play and 1-3 for the season, putting the Tigers in fifth place in the league standings.

“We came out pretty good in the first half. We had a couple of big plays,” said Tigard junior tight end/linebacker Elijah Jackman, who had four catches on offense and a sack on defense. “They had some big plays, too, but I think we fought back pretty well.”

“It’s definitely good. Last week, we didn’t play at all like we wanted to,” Tigard senior receiver/defensive back Spencer Kuffel said. “This week, we definitely brought a lot of juice. That’s a really good football team over there. You have to hand it to them. We’ve known them since we were kids. It’s good to get these young guys in, get them some experience, and we had fun.”

While both teams brought strong offensive attacks into the game, it was defense — Tualatin’s defense — that set up the first touchdown.

Timberwolves senior Jake Alton intercepted a pass at the Tigard 46-yard line. Three plays later, following a roughing-the-passer penalty on the Tigers, Jones found Prusia open down the right sideline for a 30-yard touchdown pass. Junior Dominic Borges added the first of his four extra-point kicks, giving the Timberwolves a 7-0 lead with 6:50 left in the first quarter.

Tigard answered. Tigers senior quarterback Zach Chesler completed a 15-yard pass to A.J. Perez, he threw a 17-yard pass to Kuffel, and he gained 14 yards on a scramble, setting up his 18-yard touchdown toss to junior receiver Keenan Speer-Johnson, who was open in the left side of the end zone, tying the score at 7-7 with 3:13 remaining in the opening period.

But that just seemed to fire up the already fired-up Timberwolves even more.

In its next possession, Tualatin moved the ball 49 yards to the Tigard 13-yard line, where it faced a third-and-12 situation. On third down, Jones, after scrambling in the backfield, found Alton open in the middle of the end zone. One diving touchdown catch later, the Timberwolves were up 14-7 with 11:50 before halftime.

Tualatin’s next possession ended with a 26-yard pass from Jones to Prusia, who was open down the left sideline for the score, which pushed the lead to 21-7 with 6:06 left in the second quarter.

The Jones-to-Prusia connection has been potent this season, with the promise of even bigger things in the future.

“That’s my brother,” Jones said of Prusia. “We’ve put in a ton of work for this year, and it’s good to see it all paying off.”

“We’ve known each other for only three years, but it already feels like a brotherhood,” Prusia said. “We’re out here throwing together every weekend, and it’s a brother bond, honestly.”

Ross then got into the scoring act for the Timberwolves. Two plays after a nine-yard pass from Jones to junior Peter Burke, Moss broke through the line and sprinted untouched for a 15-yard touchdown run, which gave Tualatin a 27-7 lead with 4:15 until halftime. The Timberwolves would take their 20-point advantage to the intermission.

But Tigard didn’t stop fighting. Chesler had runs of 11 and 17 yards, and he competed a nine-yard pass to senior Hewitt Sullivan and an eight-yard pass to Speer-Johnson. That helped set up a 39-yard field goal by sophomore Henry Masters, coming with 4:57 left, making the final score 34-10 — ending Tualatin’s losing streak to the rivals, while also trimming Tigard’s lead in the all-time series to 15-10.

“This feels amazing,” Jones said. “It’s one of the best feelings I’ve ever had in my life.”

“It was effort and character, and keeping our composure,” Prusia said of the keys to victory. “It all built up in practice, and we just kept chipping away. It was just a big effort thing in practice, and that made it perfect.”

“We wanted to fly around and be more aggressive. The key was to come out and start fast. We knew if we got off to an early lead, we weren’t going to take our foot off the gas, and keep pushing,” Ross said. “Oh, this was so fun. We celebrated — six years, and we finally came out with a win.”

Jones completed 18 of 27 passes for 243 yards, with three touchdowns and no interceptions.

“First off, it starts with the (offensive) line,” Jones said, referring to the group that includes senior Nate Boothby, senior Garrett Gonzalez, senior Dylan Nguyen, junior Nico Webb and senior Jennie Belisile, among others. “We had great protection all night. Our receivers are amazing. They can get any ball I throw to them.”

Prusia had eight catches for 153 yards and two touchdowns. Burke had four receptions for 59 yards. Junior Kellen Hale had three grabs for 19 yards and Alton had two catches for 29 yards. Ross, junior Jackson Biedritzky and junior Griffin Biggs had one catch apiece.

Ross ran for 70 yards and two touchdowns on 15 carries. He also completed a 39-yard halfback pass to Burke and had two punt returns for 31 yards.

“I think I could have played a lot better, but I’m just glad we got the win,” Ross said.

For Tigard, Chesler completed 13 of 24 passes for 127 yards and a touchdown. He ran for 32 yards on nine carries. Sullivan ran for 18 yards on eight carries and sophomore Konner Grant had 11 yards on five carries.

Jackman had four receptions for 35 yards.

“It was a pretty good game for me,” Jackman said. “I got targeted a lot on offense, which was pretty fun, and on defense, I got the opportunity to get a sack.”

Speer-Johnson had three catches for 30 yards. Kuffel had two receptions for 26 yards and Sullivan had two catches for seven yards. Junior Karson Boschma and Perez each had one catch.

For the Tigard defense, Jackman had a sack, and sophomore Vaughn Croxton, Speer-Johnson and Sullivan each had a tackle for a loss. Senior Aden Murphy had a fourth-down pass deflection and junior Koby Kessler blocked a field goal.

“We fight until the last horn, so that’s what we wanted to do,” Kuffel said. “That shows that we’ve got a lot of young guys. We’ve got eight seniors who play, and we’re trying to show them the ropes, and, hopefully, the goal is to help them continue our legacy.”

“We just need to finish better on offense. We need to know our jobs better, and execute more, and get our jobs done,” Jackman said. “I’ve learned a lot this year.”

Both teams will finish their seasons with games Friday, April 9. Tigard will be home to play Clackamas in a nonleague game starting at 7 p.m., and Tualatin will travel to Lake Oswego for a 7 p.m. Three Rivers League contest.

“We’re going to work our butts off in practice, and see how we do,” Ross said.