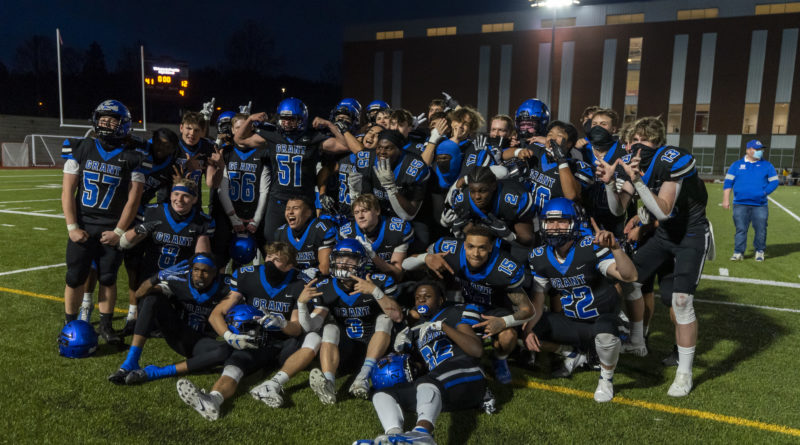 John Beck worked hard all evening to separate his coaching duties for Grant’s football team from dad duties for his son, Brennick, on Senior Night.

He held up strong during the pregame ceremonies Saturday night before the Generals’ rivalry game with Jefferson at Franklin High School.

He pushed all the right buttons throughout the game, directing Grant to a 41-12 romp over their North Portland neighbors.

It finally got to him postgame when Brennick, a Western Oregon signee who caught a touchdown pass and had four tackles in his final home game in Grant blue and white, sidled up beside him.

“I did a good job, too, until you reminded me,” Coach Beck said as he wiped away some tears. “Coming up here from Southern Oregon (Beck coached at Crater in Central Point from 2004-16), taking him away from his childhood friends, and then putting him into a way different situation, a different culture, and he’s thrived. He’s made great friends, and he’s been a big part of why our program is where it’s at. I’m super proud of him.”

On a night meant to celebrate Grant’s seniors, many stepped up and had a hand in the Generals’ seventh consecutive victory in the 96-year-old series.

“It’s a great victory, a great team win,” said senior quarterback Logan Going, who was 10 of 11 for 149 yards and four touchdowns, all in the first half as Grant built a 35-6 halftime lead. “This is a great group of guys, and I’m excited to have one more game with them.”

Seniors also contributed on special teams — Jamison Price blocked a first-quarter punt that junior Max von Arx returned 19 yards for a score — and on defense, with Jackson Monfort intercepting a pass to set up one score and Kaden Segel recovering his strip-sack fumble just before halftime to set up Going’s final touchdown pass to Borchardt from 13 yards.

Coming off a close loss to Clackamas in Week 3 and a 35-21 defeat to Central Catholic last week, the Generals (3-2, 2-0 PIL) came out with a purpose as they can now think about their finale Friday night at Mountainside.

“We wanted to prove that we can play with anyone in the state,” Going said. “I think a lot of people like to count us out, and even though we had two tough losses against great opponents in Clackamas and Central, we just wanted to prove that we are more than just a ‘PIL’ team. We have the athletes, the coaches, and just the mentality as a team to be able to play with anyone we want. We just want to keep showing that week in and week out.”

The Democrats (2-3, 2-1) also have one game remaining next week against Jesuit, but they likely will play without standout running back Damir Collins, who’s set to head to Oregon State in a few weeks. Collins injured his left wrist last week against Westview and played only a handful of snaps Saturday, carrying the ball one time for five yards.

“I just wanted to protect him, because I felt like his future was most important,” Democrats coach Houston Lillard said. “He wanted to play, and we used him mostly as a decoy just to keep him safe, but a couple of times, he snuck in there and got the ball, but I mean, you expect that from Damir. He’s a competitor.”

Collins’ absence from Jefferson’s running game certainly made a difference, but even with him fully healthy the Democrats would have been hard-pressed to stop the momentum when things spiraled against them late in the second quarter.

“I felt like we put up a good fight in the first quarter, and then the second quarter, the game got away from us,” Lillard said. “I mean, Grant’s a tough opponent. They made some good plays, and they’ve got a lot of guys who can make plays at the skill positions, so we can’t give them chances to extend drives and do what they do.

“But if you watch the second quarter, you can see obvious reasons for how it snowballed. There were a lot of things that didn’t go our way. I think we are all aware of a lot of things that made the difference in the game, and I just feel like we were on the losing end of them. That’s the best way I could put it.”

The second half featured some testy moments, including a scuffle that led to a couple of ejections, but like many neighborhood brawls, once the final whistle blew, friends from both teams sought each other for postgame hugs.

Grant sophomore Jayden Moses, a linebacker who had four tackles and a sack, is like many participants in Saturday’s game with ties to both sides — he played youth football in the Jefferson program and knows many of the Democrats players and coaches.

“This is a big game for me,” said Moses, a top Class of 2023 prospect who is rounding into shape after battling an injury most of the season. “We’re all family out there. That’s just football. It’s a competitive game, but it’s all love.”

Next week will have a much different feel for both teams, and not just because it’s not a traditional rivalry game — it will be only the second all-time meeting between Jefferson and Jesuit, while Grant and Mountainside have never played.

Jesuit and Mountainside have not hit the heights they hit a season ago, when the Crusaders reached the Class 6A semifinals and the Mavericks knocked off No. 1 Tigard en route to a quarterfinal berth in the program’s second season.

Still, Jefferson and Grant hope to close the spring with signature wins before taking a couple of months off, then turning right around to prepare for the fall season.

“Our team is pretty good, but we’ve got to show it,” Beck said. “We can’t just say it. We’ve got to prove it on the field. Hats off to the seniors tonight, but Mountainside is going to be a lot different test. I’ve coached against (Mavericks coach) John Mannion when we were both in 5A, and his teams are always super disciplined, and they play hard and they are physical, so it’s going to be quite the test.”