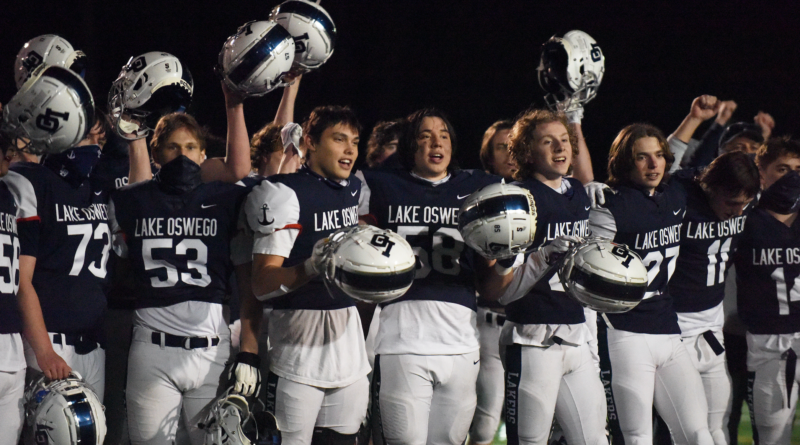 “Oh yes, we were hearing a lot,” Olvera said. “(We heard) that we weren’t that good, that West Linn was just a powerhouse and we had no chance against them.”

Fast forward to this week, and the Lakers were eager to redeem and prove themselves again. There was no better opponent for a little extra motivation than their crosstown rivals from four miles away.

Behind Olvera’s three touchdowns, including two late to put the game away, Lake Oswego held off a young and up-and-coming Lakeridge squad, 35-21, in the Battle of the Lake on Friday night at Lake Oswego High School.

“It means everything,” Olvera said. “This is our top rival, top dogs right there. We just had to beat them. There was no chance we were going to let them win this, so we had to pull it out.”

Plus, there was added motive on both sides to not lose to their friends they grew up playing with their whole lives.

“I know all of them, those are all our guys,” Lake Oswego quarterback Jack Layne said. “It makes it so much more fun when you know everyone and beat your best friends.”

The Lakers have won the past eight meetings with Lakeridge, dating to 2014 and including a Class 6A state quarterfinal victory in 2019.

But Lakeridge did not go down without a fight. The Pacers took control midway through the third quarter when sophomore quarterback Ryan Oliver found freshman receiver Joey Olsen for their third touchdown connection on a 42-yard completion.

Lakeridge clung to a 21-20 lead with 7:49 to go in the third period before the wheels suddenly came off.

Olvera escaped several tacklers and raced down the sideline for a 31-yard score to give Lake Oswego a 28-21 lead.

The Pacers then saw a golden opportunity slip away when they drove to Lake Oswego’s 4-yard line but could not convert on fourth-and-2 and turned it over to end the third quarter.

In the fourth, Lakeridge was stung by a muffed punt that was recovered by Lake Oswego senior Garret Roach, which led to Olvera’s 10-yard touchdown run to seal the victory.

Olvera finished with 17 carries for 127 yards, along with five catches for 100 yards, as Lake Oswego’s do-it-all running back.

“We needed those (last) two touchdowns to put the game away,” Olvera said. “Just had to smush all their confidence over there. It was just great blocking, and I found a wide-open hole and punched it in.”

Layne described Olvera as a “monster” as his presence opens up everything for the offense.

“It’s nice because he’s one of my best friends, too,” Layne said. “It’s easy to have a guy you can trust back there, and it makes it easier on the passing game when the running game opens it up.”

Lake Oswego got a big momentum boost just before halftime when Layne found his twin brother, Dylan Layne, on a 15-yard score as time expired to give the Lakers a 20-14 lead.

The Pacers’ passing game was on point between Oliver and Olsen, who also connected on touchdown passes of 16 and 53 yards in the second quarter.

“The Ryan-to-Joey connection is going to be real special,” Lakeridge coach Spencer Phillips said. “They’re both elite talent, so that’ll be fun to watch.”

The best part for Lakeridge? Those two will be wearing the blue and gold for two more seasons.

Oliver said he hadn’t played with Olsen before this season, but the chemistry they’ve built so far is something he’s excited about.

“We knew sometime this year that Joey was going to have a breakout game,” Oliver said. “Tonight was that game for sure. Being a 6-5 freshman, he’s got a very bright future.”

The Pacers (2-3) are looking forward to big things while they start over with a first-year head coach and see a lot of underclassmen get playing time.

“We know even though we’re young, we can compete with anyone,” Oliver said. “We just didn’t show our best tonight, but it’s going to be really special these next couple years. We’re building something really good here with Coach Phillips. He’s one of the best coaches and smartest guys I’ve ever met.

“We’ve got youth and we’ve got everyone we need to build a very good powerhouse program here.”

Roach had five catches for 61 yards to lead the receiving corps.

The Lakers will finish the six-game season against Tualatin (4-1) next Friday at home, but for now, they will enjoy “owning the lake” for another season.

“We circle this game on our calendar every year,” Jack Layne said. “It’s a credit to our coaching staff and getting us ready for the week. Every time we play, no matter what team, we’re going to be ready.”

Added Olvera: “We were motivated. We struggled against West Linn, but I think that pushed us harder to work. We just tried to get this win because this game meant so much. So many past players were probably watching because it’s the Lakeridge game, so it just means so much to everyone.”