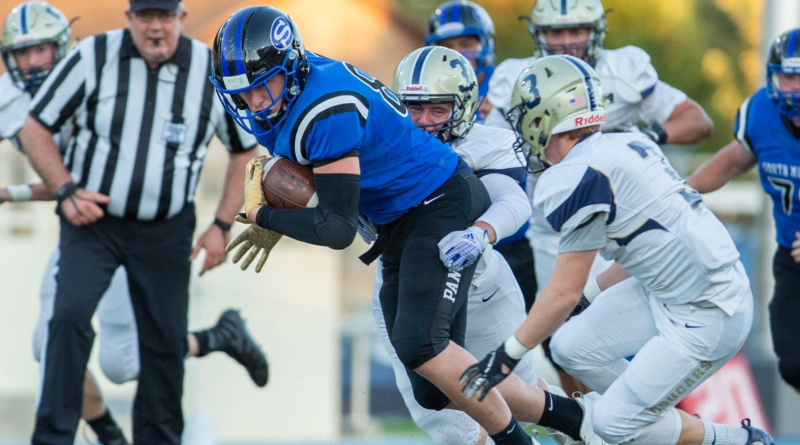 Sophomore quarterback Deacon Edgar ran for two touchdowns in the final two minutes, Lucas Rivera recovered the onside kick to set up the decisive drive, and Jude Pannell kicked the winning extra point with 29 seconds left as the host Panthers completed their comeback from a 20-0 hole to tip the Black Tornado in the 35th Black and Blue Bowl.

North Medford (3-2) went up 20-0 in the second quarter on the first three of four touchdown runs by Devin Bradd, who piled up 306 yards on 38 carries at Spiegelberg Stadium.

Bradd’s final touchdown run, a 58-yarder, put the Black Tornado ahead with 6:05 left, per the Mail Tribune account by Kris Henry.

The Panthers (4-1) responded with an 80-yard drive highlighted by a 60-yard pass from Edgar to Carson Cota. That led to a two-yard scoring run by Edgar, who passed for two touchdowns in addition to running for two.

After Pannell’s extra point made it 34-28 with 1:53 left, he executed a successful onside kick. That led to a 62-yard drive, capped by Edgar’s seven-yard touchdown run and followed by the go-ahead extra-point kick by Pannell.

The Black Tornado’s final drive reached the Panthers’ 36 before Cota got a sack to squelch North Medford’s hopes.

Asher Johnson intercepted a North Medford pass deep in South Medford territory in the third quarter. The Panthers scored on the ensuing drive to stay in contact.