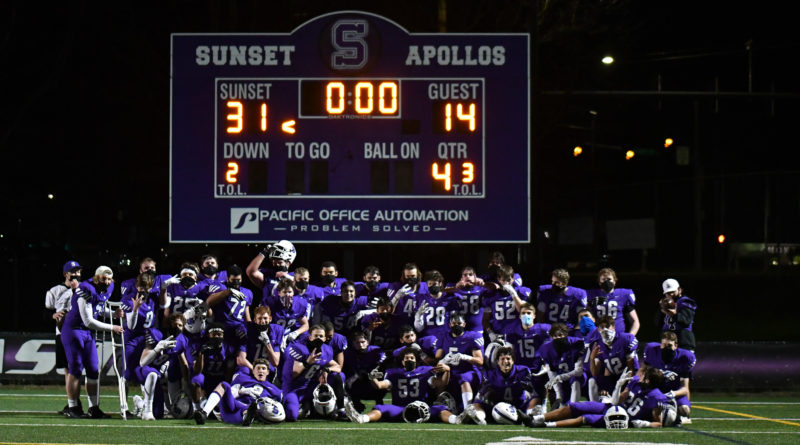 As the Jesuit football team gathered around coach Ken Potter in the west end zone at Sunset High School on Thursday night, the Apollos broke from their huddle and suddenly made a beeline toward that end of the field.

In the northwest corner, they stopped and posed for photos in front of the scoreboard, jubilantly pointing to the final score:

It had been 27½ years since a Sunset team could celebrate after playing Jesuit. Not since the 1993 season had the Apollos defeated their Metro League rival, a 26-game losing streak that included some close games and many that weren’t.

None of the Sunset players were born the last time their program had beaten Jesuit, but they felt the weight of that losing streak just the same — and exulted in tossing it aside with a dominant performance from start to finish.

“In the back of our minds, we knew how long it’s been,” added senior quarterback Kyle Jaekel. “As a senior class, this is our last time out here, and we just thought, ‘Let’s go for it. Let’s end the streak,’ and we did.”

Jaekel played a key role in the Apollos improving to 5-0 entering a culminating-week matchup with defending Class 6A state champion Central Catholic, carving up the Jesuit secondary time and again as Brown and his offensive linemates gave him plenty of time to survey the field, yielding no sacks.

Jaekel finished 15 of 18 for 263 yards and three long touchdown passes — a 35-yarder to Nic Janati and bombs of 48 and 54 yards to Chase Limbocker. The Apollos converted on 7 of 10 third downs and scored on 5 of 7 possessions, missing only on their final drive of each half as they ran out the clock.

“Kyle just did a great job of keeping his eyes downfield, because there were a couple times where his primary wasn’t necessarily there, and he just kept things alive and found guys,” Sunset coach Damien Merrick said. “Our receivers obviously did a great job of not giving up on the play and continuing to work to get open, and our pass protection was really good all night long.”

The Apollos thought last season would be their chance to finally end the streak, when they had the Metro League title firmly in their sights after a Week 6 win over Aloha. Back-to-back defeats to Beaverton and Jesuit dashed those dreams, and they eventually lost in the first round of the Class 6A state playoffs to West Salem.

“We definitely had that in the back of our minds,” Brown said. “We just didn’t play our best then, so this season, we came out swinging, and we never stopped. So, it definitely affected us in a positive way.”

Merrick pointed to seniors such as Jaekel and Brown but also a strong junior class that includes Limbocker (six catches for 151 yards) and running back Caleb Kim (21 carries for 72 yards) which picked up a leadership mantle he felt was dropped last season.

“Last year’s group was a lot of fun, but I think there were some guys who maybe had a little bit of self-doubt,” Merrick said. “But this group has been just resilient from Day 1. Not knowing if they’re going to have a season for 10, 12 months, then last week, with spring break, you know there’s all kinds of distractions, then this week, playing on a Thursday, with one less day of preparation, and they have just stayed the course. They’re a resilient bunch.”

It’s the kind of resiliency Potter hopes his young team takes from the six-week season during which the Crusaders (2-3) have alternated losses and wins going into their finale against Jefferson next week.

They showed some resiliency Thursday night, fighting back from falling behind 21-0 after 16½ minutes to try to get back in the game. They marched to the Sunset 3-yard line in the final minute of the first half before getting denied, then took the second-half kickoff and went 80 yards in 14 plays before freshman quarterback Matt Irwin snuck in from the 1 with 4:48 left in the period.

The Apollos answered with another quick strike, with Jaekel rolling left to find Limbocker, who had gotten behind the defense and outsprinted the corner to the end zone for a 54-yard backbreaking score.

Irwin, making his second start after taking over for injured junior Tatum Lewis late in a Week 3 loss to Sherwood, showed his potential throughout the second half. He finished 11 of 25 for 114 yards and a late fourth-down interception and ran for 38 yards and a score.

“We see some maturity happening on the field,” Potter said of Irwin. “He’s making some plays with both his legs and his arm, and he’s learning, as a lot of our kids are learning, and that’s the bottom line.”

The bottom line for the Apollos is they ended their long losing streak to the Crusaders and remained one of nine undefeated teams in Class 6A, with a shot at Central Catholic looming next week.

“It’s definitely a chance to prove what we have and what we can have, no matter the circumstances,” Brown said.

Although there’s no title on the line next week, that doesn’t mean finishing 6-0 with a win over the defending champions wouldn’t have meaning for the Apollos.

“Yep, it would be so special,” Jaekel said. “I mean, at one point, we didn’t even have a season, so these six games, that’s all that matters, and I want to make them all count.”