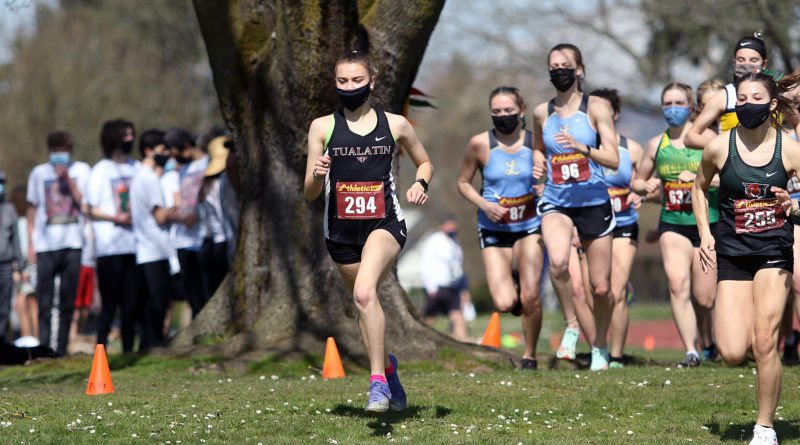 What a difference a year makes.

More specifically, what a difference a year and five months — combined with a new attitude — makes.

“It means a lot. All of my other district races have gone badly, for reasons that were partially out of my control,” Helland said. “So, it’s really a privilege to come out here and win.”

Helland, who outdueled Tigard sophomore Lily Herman to claim the district title, won the 5,000-meter race in a personal-best time of 19 minutes, 29.64.

That time didn’t come without a lot of hard work.

“I’ve put in a lot of miles, and I think that COVID really shifted my perspective,” Helland said. “It gave me the opportunity to push harder, instead of doing what I always did.”

What Helland always did, in past years, was admittedly a bit different.

“I usually just tried to do whatever everyone else did, stay in the middle of the group,” she said. “But I realized I had the opportunity to put in as much effort as I chose, and so I chose to go for it a bit more.”

She definitely went for it during Wednesday’s district championships.

“Partway through the first mile, I decided to push a little bit, and it ended up paying off,” Helland said with a smile.

After pulling away from Herman, Helland kept pushing her pace, leaving her all alone as she crossed the finish line in first place.

“I was glad it was over, and I was just so grateful for the opportunity today,” Helland said. “We didn’t know if we were even going to have a season this year, so it was really a privilege, no matter what the outcome was.”

As a senior, the outcome couldn’t have been better for Helland.

“This was a great way to finish up,” she said. “Yeah, I thought this could happen. You have to come in with confidence, expecting to win, and see what happens. This was so fun. I love it.”

The Tualatin girls, with Helland leading the way, finished second in the team standings with 60 points. That put the Timberwolves only two points behind Lakeridge, which won the district team title with a score of 58.

“The team has been doing great. I’m really proud of everybody,” Helland said. “It’s not easy coming out here. You have to have a lot of self-motivation when there is isolation. Everyone has been putting in the effort and doing a good job. We just took every opportunity that we could get.”

Herman, who finished sixth at the district meet last season as a freshman, moved up to take second as a sophomore, with her time of 19:45.60.

“I’m pretty happy with it,” Herman said of her runner-up finish. “It was a little weird, but I’m glad we had a season. I had fun today.”

Herman got off to a strong start and was right behind Helland for the early portion of the event.

“I was just planning to stick with her as long as I could,” Herman said.

The talented Tigard sophomore is already looking ahead, not only to her junior cross country season, but to the upcoming 2021 track and field campaign.

“It’s difficult to be motivated, because there’s no state meet this year, but I just did my best, and I’m ready for track now,” Herman said. “This is definitely motivation for next year. Hopefully, we have more of a regular season, and my focus will shift more to state, instead of district.”

Also for the Tigard girls, freshman Caroline Johnson finished 20th in a time of 23:06.38, and sophomore Mercedes Harms was 21st at 23:08.16. The Tigers finished in sixth place in the team standings with 115 points.

Lakeridge used a balanced attack to edge Tualatin for the team title. Junior Ainsley Williams led the way for the Pacers, finishing in third place with a mark of 20:26.83. The Pacers had two other top-10 finishers in senior Tessa Divergilio, who was sixth at 21:09.10, and senior Holly Lane, who ran to eighth place in a time of 21:14.58.

St. Mary’s Academy finished in third place with 89 points. Junior Sophia Green led the way for the Blues, finishing 11th in a time of 21:58.77. Senior teammate Olivia Weiss was right behind her in 12th place with a mark of 22:06.75.

Lake Oswego was seventh with 140 points. Lakers freshman Sydney Lim finished fifth with a mark of 21:02.18.

Canby didn’t have enough varsity runners to get a team score, but Cougars junior Ashley Peterson ran to fourth place with a time of 21:01.05.

The Tualatin and St. Mary’s Academy girls are slated to finish their seasons at the Rose City 6A Championship Invite, which will be held Saturday, April 10, at Rose City Golf Course in Portland.

“I just want to do the best that I can, and see where that takes me,” Helland said of the 6A Championship Invite.