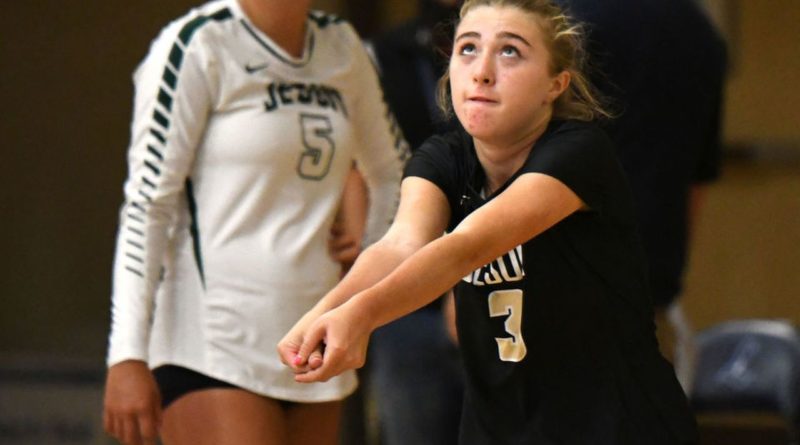 Over the next two weeks, we’ll be taking a position-by-position look at some of the top players in Oregon high school volleyball. Our second list focuses on the liberos and defensive specialists.

There are hundreds of standout volleyball players in Oregon and these lists are not intended to be comprehensive. Use the comments section to share some information about some of the state’s other standout liberos.

Alexander was a first-team all-state selection last season in backstopping the Crusaders to a second consecutive Class 6A title. Through six matches (20 sets) this season, she had a team-high 45 service points (.930 serving, nine aces) and 73 digs (3.7 per set).

Arritola was a first-team all-state selection as a libero last season in helping the Trojans win their first Class 2A state championship.

A first-team all-Three Rivers libero as a junior, Bareksten is teaming with sophomore defensive specialist Sam Keightly this season to form one of the league’s top defensive pairings.

Barton was a first-team all-Mt. Hood selection as a junior and was named a team captain this season. “She does really well for us in all aspects,” Pioneers coach Lihau Perreira said.

Biehler competed on a competitive jump rope team for eight years, which gives her the spring necessary to get to balls that otherwise would seem out of reach. She moved from defensive specialist to libero this season and leads the Timberwolves in digs and serve-receive passing. “Sophie is an all-out player who I believe is one of the top liberos in our league and will definitely get an all-league honor,” Tualatin coach Tiffany Zwick said.

The Badgers reached the Class 1A state final each of the past two seasons, and one constant has been Cole at libero. The two-time all-district first-teamer served 88 aces (.942 percentage) and had 397 digs as a junior, and she had 230 digs, 28 aces and 17 digs midway through this season. Cole also qualified for the 2020 state wrestling championships. “Bailey knows no fear,” Powder Valley coach Marji Lind said. “She has to be one of the sweetest young ladies I have ever met. She is quiet and kind to everyone, but she is a fierce competitor. She never gives up on a ball and has all the bruises to prove it.”

Collins, a two-time Eastern Oregon League player of the year and second-team Class 3A all-state selection as a junior, attends Baker Allprep Early College and competes for the Knights. In three seasons, the Eastern Washington signee has 608 digs, 151 aces, 100 assists and 30 kills. “Makenna came to camp and knocked my socks off,” EWU coach Leslie Flores-Cloud said. “She might be the smallest in the gym, but she’s also the most dialed in. Her serve-receive and defense is outstanding. She is sure to be a fantastic defender for us.”

Dowell has filled several roles for the Bulldogs during her four-year varsity career. She was a second-team all-Mid-Willamette defensive specialist as a sophomore, then moved to the outside last season and earned second-team Class 5A all-state recognition with 212 kills, 392 digs and 54 aces (95.3 percent serving). She’s back at libero this season and leading the team defensively. “Madie has great reading ability and is so quick, it’s hard to get much by her,” West Albany coach Megan Wallace said. “She is also a great leader, holding herself and her teammates to their best.”

Edwards not only starts at libero for the Beavers, but she also does a lot around the Beaverton community. Coach Ashley Waggoner said, “Hannah’s love language is Acts of Service,” which she shows by helping the Aloha team get votes for the Elite OR Girls Championship on Instagram, participating in an October candlelight vigil for Pregnancy and Infant Loss Awareness Day, or coming in early to mentor the next group of Beavers on the freshman team. “She brings endless energy to the gym every day,” Waggoner said. “She put in a ton of work over the summer and offseason and makes everyone want to do better.”

Fraser earned all-PIL honorable mention as a sophomore in helping the Trojans run the table in league play and reach the second round of the Class 6A state playoffs. “Avery is a setter’s best friend,” Wilson coach Mark Mendak said. “She covers the whole court and is always hustling and working hard, with an eye for the ball unlike most. Aside from the perfect passes, she serves aggressively and swings hard from the back row.”

Gay transferred from Lakeridge after her freshman season and plays on the outside for the Cougars out of necessity (101 kills, 82 digs, 48 aces as a junior), but she signed with the University of Idaho for her play at libero and defensive specialist on the club circuit. “The last two years, she has not been recognized as she should have been, but in my opinion, she is one of the state’s best passers and defensive players,” Canby coach Terri Jo Schlatter said. “She is a phenomenal passer, and she and Daley (McClellan) make a formidable pair out on the floor. She has willingly taken on the role as outside hitter without complaint for the good of our team. The beauty for me is that we still get her passing and defense full-time, which is a critical piece of our success.”

Hayes was a second-team all-Sky-Em selection as a junior despite playing out of position to start the season, moving to outside hitter because of injuries. She finished with 398 digs and 31 aces, serving 93 percent. Back at her natural libero position full-time, she’s averaging 3.6 digs per set and serving 94 percent this season. “She’s the only player to play in every set this year,” Spartans coach Shari Pimental said. “She’s improved defensively and also on serve receive and is our best passer.”

The Western Oregon commit and second-team all-state selection isn’t resting on her laurels after playing a key role in the Ravens winning their first Class 5A state championship last season, when they bounced back from a three-set loss to Corvallis in the 2018 final. “Ally is playing some of her best volleyball right now,” Ridgeview coach Randi Viggiano said. “She plays 30×30 defense and seems to be everywhere on the court.”

It’s not often a coach will rely on a freshman to play libero. More often, they ease their youngsters into that role by playing them at defensive specialist, but that wasn’t the case for Axe coach Alicia Chamness with Jung. “Ellie is one of the most technically sound players I have seen — and at such a young age!” Chamness said. “She thrives on technical feedback and brings a sense of calm and trust to the court. I am so excited to work with her and watch her grow over the next four years. She has the potential to play at the D1 level.”

King stepped in for graduated first-team all-Mountain Valley libero Sophie Matlock this season and instantly became “the captain of the back row,” as Storm coach Jill Waskom called her. King leads the team in digs and serve receive and “is making some great defensive plays this season,” Waskom said.

King, an honorable mention all-Cowapa selection as a sophomore defensive specialist, took over for first-team all-state libero Zoey VanVleet this season and through five matches (15 sets) had a team-high 40 digs. “I coached Kylee in club before high school, and to see her now as a junior, she has developed into a much more confident, consistent passer,” Valiants coach Becky Kemper said. “Her serve receive and defense is critical for us, considering we have a freshman setter, to get the ball to our best hitters.”

The Warriors libero received all-PIL honorable mention as a junior and volunteers at Blanchet House, which provides food and shelter for those in need. Her classmates voted her the “Person You Would Most Like to Be Deserted on an Island With.” Cleveland coach Sydney Hammond said, “Mimi is an amazing libero who should be on the watch list for colleges that still need a defensive player. She reads the ball well, has strong leadership and is technically solid.”

When Nealon isn’t joining her family at the Oregon Coast riding quads along the dunes, you’ll find her digging up every ball she can for the Cobras. A three-time all-league selection (first team in 2018-19) and two-time Class 2A second-team all-state pick, she averaged 6.3 digs per set as a junior to go with 2.2 aces per match and more than 40 assists. She will play at Chemeketa in the fall. “Size has nothing to do with fierceness,” Central Linn coach Holly Northern said. “Josie is small but plays huge on the court. She can uncannily read a hitter and make defense look easy with her speed and agility.”

Patrick made the Valley 10 all-defensive team as a junior after leading the Eagles in digs and making 53 assists in helping them place fourth at the Class 1A state tournament. “McKenna has been the glue for this team,” Damascus Christian coach Emily Russau said. “Much of what she does will not show up in the stat book. She is one of our team captains and a player who I can rely on to always be composed, sound and consistent.”

Rasch went from being an all-Northwest Oregon Conference honorable mention defensive specialist as a sophomore to a first-team libero last season, helping the Falcons get back to the Class 5A state tournament after a two-year absence.

Roach stepped in for Isella Wallace as a junior and became an all-PIL first-team selection.

Rosa was a Class 6A all-state honorable mention selection at setter last season, but with the arrival of sophomore sensation Mia Starr along with junior Lauren Stemple returning, first-year coach Kayla Hambley moved Rosa to libero, where she’s thrived in her new role. She led the team with 34 digs (3.4 per set) and served seven aces (.929 serving) during the Rams’ 3-0 start.

Snook has carried on the family tradition at West Linn, taking over for older sister Ellie and recording 360 digs and 39 aces in earning second-team all-Three Rivers honors in her second season at libero as a junior. She’ll follow in Ellie’s footsteps again in the fall as Lily will join a Portland State team for which Ellie was a second-team all-Big Sky selection as a freshman in 2019. “Lily brings the experience from last year into this year,” Lions coach Emilie Wilmes said. “She has a contagious bubbly personality that is huge for our team.”

Zanona has made the Class 4A all-state team twice (second team as a sophomore, honorable mention as a junior) and averaged 11 digs per match and served 94 percent in the Huskies’ toughest matches — and they’ve played in several, last season reaching the state final for the first time since 1992. She will play for Linn-Benton in the fall and study diagnostic imaging. “Graci is an intense competitor who has high expectations for herself and pushes to reach her goals,” Sweet Home coach Mary Hutchins said. “She studies her opponents, reads hitters well and covers a large portion of the court.”