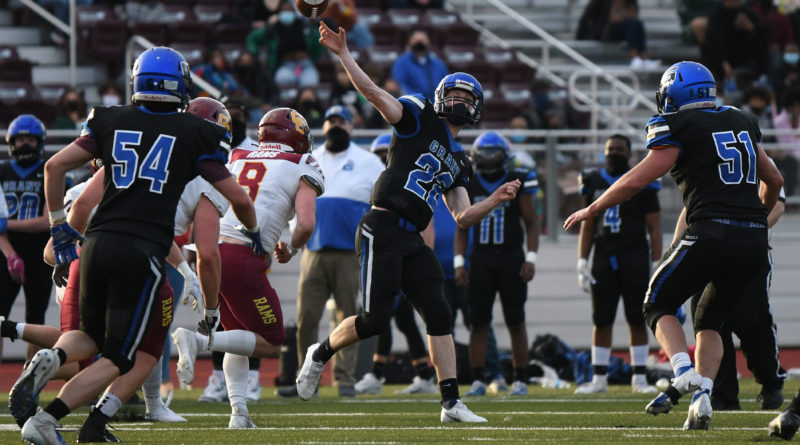 Now, we focus specifically on the Week 5 schedule. Here is an inside look at the top high school football games across the state of Oregon this week (April 1-3).

The undefeated Apollos look to snap a 26-game losing streak to their Metro League rivals and beat the Crusaders for the first time since 1993. Jesuit has alternated losses and wins this season, holding off Mountainside in overtime last week.

The two preeminent programs in the Eugene area at the moment square off as the Irish try to improve to 3-0 under sophomore quarterback sensation Brock Thomas while the Colts hope to shrug off their last-second defeat to Mazama that snapped a 20-game win streak.

The Cougars have won three in a row since a season-opening loss to Clackamas but have lost Air Force commit Chance Miller for the rest of the season with an injury. How will that affect them in their matchup with the unbeaten and the SBLive Oregon Class 5A No. 1 Wildcats?

Both teams had last week off — the Mustangs in the second week of their COVID-19 quarantine; the Hornets when Klamath Union canceled midweek — giving them plenty of time to prepare for this Skyline Conference showdown between 2019 playoff teams.

The annual crosstown rivalry has been owned of late by the Lakers, who have won seven in a row and 20 of the past 23 meetings — two coming last season, including a 24-21 victory in the state quarterfinals. Enjoy the duel between a couple of young quarterbacks — Pacers sophomore Ryan Oliver and Lakers junior Jack Layne.

This should be an interesting matchup between two up-and-coming programs. The Tigers are 4-0 for the first time since 1974 and would have been on the shortlist of Class 6A title contenders any other year, while the Mavericks look to rebound from an overtime loss to Jesuit that dropped them to 2-2.

Since Medford split into North and South in 1987, the annual “Black and Blue Bowl” has been one of the state’s great rivalries — and with both teams coming into Friday’s game 3-1, this edition should be no exception. The Black Tornado hold a narrow 18-16 lead in the series after ending a three-game losing streak to the Panthers in 2019.

The Tigers have won five in a row in this intradistrict series — including 23-21 last season — and nine of the past 10 meetings to open a 15-9 all-time lead. The Timberwolves, though, come in riding a ton of momentum after rallying in Week 3 to beat Lakeridge and following with a victory over Oregon City.

The records notwithstanding, the “Battle for the Bridge” — considered the longest-running rivalry game west of the Mississippi River — is always special. Friday marks the 100th edition of this matchup that dates to 1921. The Pioneers hold a narrow 50-48-1 lead in the series, but the Lions have won the past seven meetings.

The past two seasons, this game has decided the Mid-Willamette Conference championship. Although there is no title on the line this season, these two Class 5A powers should put on a show yet again — all three of their matchups the past two seasons were one-possession games.

These programs have combined to win the past six Class 1A state championships, with the Rangers’ four-year streak (2015-18) sandwiched by Adrian titles in 2014 and last season. They enter this Saturday afternoon matchup a combined 8-0 this season.

These teams have played in the Mt. Hood Conference championship game each of the past two seasons, with the Rams winning last season 48-7 en route to the Class 6A title. Central Catholic hasn’t skipped a beat this season despite heavy graduation losses; Clackamas can match its win total of a season ago with a victory Saturday.

These teams currently sit No. 2 and No. 3 in the Class 4A BCS-style rankings that will be used to set up culminating-week games for Week 6. The Pirates have one of the state’s top passing attacks led by Dom Montiel, who has thrown for more than 1,000 yards through four games. The Spartans have not lost to a 4A opponent.

The Panthers will try to knock off another of the NWOC East’s top teams after traveling to Pendleton and shutting out the Buckaroos last Friday — their third shutout of the season. The Falcons had a brief COVID-19 scare but returned in time to defeat Putnam 55-0 on Monday.

These schools sit just four miles apart in North Portland, but for the 81st edition of this PIL rivalry, they’ll take their show under the lights in Southeast Portland at Franklin’s new field — the perfect locale for star recruits such as Damir Collins and Trejon Williams of the Democrats and Timon Davis and Donald “Chili” Stephens of the Generals.