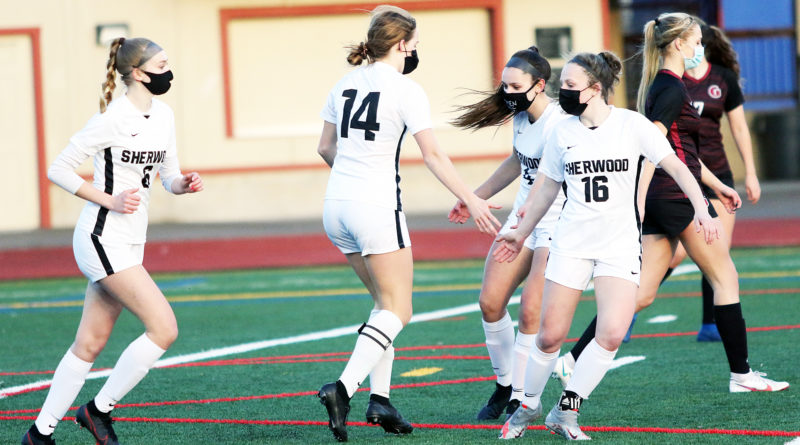 The Sherwood girls soccer team is making sure to give everything it has. The Bowmen aren’t taking anything for granted.

That certainly seems to be working out well for them. On Monday, it definitely did.

Sherwood, playing with intensity and enjoyment from start to finish, powered its way to an 8-0 win over Glencoe in a Pacific Conference match at Hare Field in Hillsboro.

“We’ve been coming after every game, going out knowing that anything can happen, so we always bring our best no matter who we’re playing,” said Sherwood senior midfielder Joley Sproul, who scored the first goal.

“This year is a gift for us, especially for us seniors,” said Sherwood senior defender Morgen Fried, one of the team’s captains. “We didn’t know if this season was going to happen or not. So, we’re just trying to make the best of every game and every situation. Every team we play, we bring our all, because we don’t know when our last game is going to be it, so we’re not taking anything for granted.”

With its fifth win in a row, Sherwood improved to 6-2 overall and 5-0 in Pacific Conference play.

“It was really good. It was really fun to be out there,” Fried said. “Our team is fairly new, we have a lot of juniors, so we’re getting to know one another, getting to know our strengths and weaknesses, and going out there and trusting one another. That’s our big goal, every time we step on the field, we want to get to know each other as players and more. We’re almost like a family now.”

“We just want to come away better as a team, playing together, knowing each other better,” Sproul said.

Glencoe moved to 1-6 overall and 1-5 in Pacific Conference play, but maybe more important than the outcome of the game to the Crimson Tide players was that they got to play in front of a Senior Night crowd.

“It was special tonight, because we weren’t even guaranteed a season,” Glencoe senior forward Lizzy Merkel said. “The fact that we had a season, and we had spectators, at least a little bit, for Senior Night … and even though it wasn’t the outcome we wanted, we held our ground in the second half.”

“It was really special to be able to have people here, all of our families, for Senior Night,” Glencoe senior defender McKenna Thrush said. “It was really fun, I really enjoyed it.”

Bowmen sophomore forward Ella Weathers hit a hard shot from the right side, with Glencoe senior goalkeeper Madison Acosta blocking the attempt. But Sproul, in the right place at the right time, knocked the deflection inside the left post of the Crimson Tide goal, giving Sherwood a 1-0 lead just 1 minute and 46 seconds into the contest.

“We were taking a lot of shots, and I knew we had to follow and finish,” Sproul said. “So, I made sure to get on the end of Ella’s shot and put it in.”

Sherwood then showed its penchant for scoring goals in bunches.

Bowmen junior Ella Lahart, after taking a pinpoint through pass from Weathers, scored on a shot from 14 yards, making it 2-0 with 29:34 left in the first half. Just 20 seconds later, Sherwood sophomore Ava Weisenfluh scored on an attempt from the left side, with her bending shot bounding off the right post and into the back of the net, to make the score 3-0.

“When we score first, we get a little more comfortable,” Sproul said. “We play really good when we’re on our toes and ready to go. So, we connect on more passes when we’re comfortable. We were able to play together.”

With 12:06 left in the half, Sherwood junior Ella Kunert scored on a shot from 30 yards. Less than two minutes later, Bowmen junior Megan Murphy converted a shot from the left side, coming off a pass from senior Tori Mexicano, helping Sherwood claim a 5-0 lead at the intermission.

The Bowmen, with their relentless attack in the first 40 minutes, could have been up by an even bigger margin, but Acosta came through with nine saves in the first half, including a leaping save of a shot by Sherwood sophomore Taylor Holt and a diving save of an attempt by Weathers. Glencoe senior defender Payton Hay also had a clutch clear of the ball in front of the Crimson Tide goal.

Glencoe seemed to come out with added intensity in the second half.

“I feel it was our talk, in our circle, that made us realize what we needed to do, and we didn’t want to lose that bad,” Thrush said.

“We were a different team in the second half,” Merkel said. “It was our mentality, first of all, and second, it was just grit. We didn’t want to be beat to the ground.”

Merkel had the best scoring chance for Glencoe in the second half. With 14:41 remaining, she hit a lofting shot from 35 yards on the right side. Sherwood senior goalkeeper Sidney Sproul had to do a quick back-pedal to make the save.

That was the only shot on goal allowed by the Sherwood defense, which included Fried, sophomore Lainee Derry, Weisenfluh and junior Ellie Schmidt, among others.

“It was awesome. We have a solid back line,” Fried said. “Our biggest key is communicating. We’re always talking to each other and stepping up and switching from man to mark, and our biggest goal, for our defense, is trusting one another and being able to rely on one another.”

In the second half, Sherwood got goals from Weisenfluh, off a pass from junior Kaila North, Murphy and Kunert, off an assist from junior Reese Clouser, to close out the 8-0 victory.

“Honestly, one of our biggest goals has been to communicate with one another,” Fried said. “We can communicate in the back line, to the middle, to the forwards. That’s our goal, and I feel we did a really good job at that tonight.”

“It’s been great to get back on the pitch, because we didn’t know what was going to happen,” Joley Sproul said. “It was pretty good. We came out with a lot of energy, and we were able to put it away. We had a lot of shots on goal.”

Sherwood had 26 shots on goal, as well as 11 corner kicks.

“They’re very good,” Merkel said. “Absolutely, it was important for us to keep battling.”

And, for Glencoe’s eight seniors — Acosta, Emily Yurovchak, Thrush, Merkel, Izzy Hodges, Vivian Sauceda, Hay and Alexis Magdaleno — it was one last, special opportunity to play on their home field, in front of a home crowd.

“Tonight was awesome,” Merkel said. “I feel so blessed to have the opportunity.”