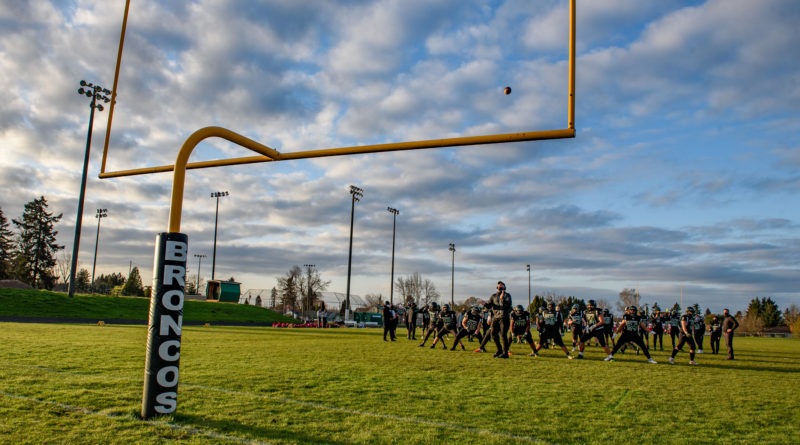 Lowe became nationally revered during his time at the Northeast Portland school, but he had Jackson’s help in changing the culture of the football program. Now, it’s all Jackson’s team, and the “other” former Oregon Duck-turned-high school coach insists the Broncos’ renaissance under Lowe was merely the beginning.

Brian Jackson was riding his motorcycle on the freeway on a January day like any other three years ago when he received a phone call.

He doesn’t know who’s on the other end of the line as he hits a button on his helmet cam to answer.

From that phone call, Jackson’s future would become set on a path that led to last Friday night, when the former University of Oregon standout earned his first career win as a head football coach.

On the other end of the line was Jackson’s one-time Ducks teammate, Keanon Lowe, who had just been named the head coach at Parkrose. At the time, Jackson had been a defensive backs coach at Sherwood for two seasons, and Lowe was calling to offer him the chance to become Lowe’s defensive coordinator and strength and conditioning coach at the Northeast Portland school.

Jackson grew up in Hoover, Ala., and played for a football factory that has won 11 state championships since 2000. During his time with the Ducks (2010-13), he became a two-year starter for a team that won two Pac-12 titles and went to three BCS bowl games during his four years. He then joined a Sherwood program that has made 16 consecutive state playoff appearances.

Parkrose, though, would be a different challenge. When Lowe and Jackson arrived on campus, the Broncos were coming off consecutive winless seasons that had sapped the program of energy and spirit.

As he wrote on his LinkedIn profile, he worked with “former teammate and great friend Keanon Lowe to create a new culture and change the Parkrose football program into a powerhouse.”

“The first thing we had to do was definitely to create a winning culture,” Jackson said. “Creating a culture is the No. 1 thing you need to do, and sometimes, it doesn’t include winning games, but it starts with a winning attitude and winning mindset. From there, you instill the will of a fighter. That’s what I always had them do — keep fighting, keep fighting, and your chance will come.”

After the 2018 season finished with a 5-5 record and Parkrose surprising many by reaching the Class 5A playoffs, Jackson left for an opportunity with the Beaverton School District and joined Southridge’s staff as a defensive assistant. Lowe stayed and made national headlines when he disarmed and embraced a student with a shotgun on campus in May 2019. Later that year, he guided the Broncos to a 7-3 record and the first playoff win in school history.

Two months after that historic victory, Lowe was named head coach at West Linn. (He since has left for a college assistant job at UCLA; he then left UCLA for a position with Nebraska.) Immediately, Jackson thought about returning to Parkrose to continue what he and Lowe had started.

“I was a big part of that, and I was very proud of how things were when I left,” he said. “I couldn’t wait for the chance to come back. It was like, hey man, I saw the potential when I was here, and I was just like, I gotta come back and do something with it.”

Jackson’s familiarity with the players helped smooth the transition after he accepted the position in March 2020.

“Coach (Jackson) was here that first year, and I have a lot of respect for our old coaching staff,” said senior lineman Ty Delgado. “They started a good program, and it came from nothing, two winless seasons, and we bounced back with two winning seasons.”

Jackson’s first year at Parkrose, though, has been anything but normal. The same month he accepted the job, the COVID-19 pandemic swept the nation, shutting everything down.

The OSAA delayed the start of the season from September to March. Initially, Parkrose School District announced it would not opt into the tackle football season and would instead play a 7-on-7 schedule, then changed its decision several days later. The late start took its toll on participation numbers and prep time, but that didn’t stop Jackson from plowing ahead with his culture change.

“But this is the best coaching staff we could ask for. They push us hard, and they want to see us succeed on and off the field.”

Friday’s win ‘the start of something’ for Broncos

The season began with back-to-back shutout losses to Pendleton and Reynolds, but in Week 3, Parkrose lost a hard-fought game with Gresham that showed Jackson and the team that what he’d been preaching — keep fighting, and your chance will come — was coming closer to reality.

That led to Friday night against Madison.

The Broncos jumped out to an early lead, with the program’s past and its future on full display. Senior running back Rich Tran scored the first touchdown and Delgado opened holes at center and made a game-high eight tackles. Freshman quarterback Kenji Johnson displayed poise in leading the offense, throwing a third-quarter touchdown pass to junior Michael Scott to push the lead to 12-0.

Madison mounted a furious comeback attempt, twice driving deep into Parkrose territory before getting denied. When Scott broke up a fourth-down play near the goal line with 4:11 remaining, Jackson raced 30 yards to be the first to congratulate him, drawing an admonition from the official that he readily accepted in his joy.

The Senators got the ball back and finally got into the end zone with 37 seconds left. Trailing 12-6 after a blocked extra point, they recovered the onside kick and reached the Parkrose 13-yard line with four seconds to go.

As the small Broncos crowd grew nervous, Jackson called timeout to calm his players and set up the defense for one last stand.

The play started, and Madison quarterback Marcus Holden rolled to his left, and his receivers flooded the end zone. He threw into a crowd of players, but the ball sailed over everyone’s heads and landed untouched in the back of the end zone, setting off a raucous celebration on the Parkrose sideline.

“I’m just so proud of them for fighting through to the end and not giving up, even after losing three straight,” Jackson said after drying off following a water bottle bath from his players. “That’s tough as a coach, but we found a way to keep going.”

It’s just one win, coming 17 months after the biggest win in program history, “but hey, I think today is the start of something,” Jackson added. “Obviously, there were some bumps in the road in the last couple of minutes, but they were able to come up with the play when they absolutely needed it.

“It proves that they have the guts that we’ve been looking for. Sometimes, they don’t believe in themselves, just because they’re teenagers, right? It’s like, no, you can. Just instilling that can-do attitude is what it’s all about. You can do it.

“We’ve just been working so hard,” he said. “It’s a great feeling, you know, because we deserve this. We really do. We come out here at 6:30 in the morning, we work our butts off, watch film every day. We’ve got a lot of good, young talent, and we’re going to be good for a while. We’re ready to work, and we’re going to be a problem. So, yeah, it means a lot.”

Jackson, Broncos ready to create their own legacies

Johnson is one of nine freshmen on the roster, nearly matching the 10 seniors playing their final season. Leading a program as a ninth-grader “has been kind of weird because I’m younger than all of them, but they’re all super supportive — not like any, hey, look at this little kid; they all pat me on the back when I do good and coach me up when I mess something up.”

Jackson acknowledged he’s thrown a lot at Johnson and other youngsters such as sophomore Demetrius “DJ” Payton-Rivas, hoping to build off the success of the previous two seasons — success created by players such as Taydrian Jackson and Tre Singleton, the 2019 NWOC East offensive and defensive players of the year, respectively — while encouraging them to forge their own identities.

Jackson was not speaking only about his players when talking about creating one’s destiny. While he appreciates all that Lowe did in his time at Parkrose, Jackson has big dreams that he said he’s willing to invest the time to fulfill as he pointed toward the football stadium.

“The way I see this place is a lot different than how a lot of other people see this place,” he said. “For me, it looks like a mirage. I can see what it’s going to look like in the future. Everybody only sees what it looks like right now. My plan is, like I said before, to make it flourish.

“So, what I’m seeing right here as you look out here, you and me, we don’t see the same thing. I know this is going to be hard. I’ve just got to keep my head on straight and we’ll get there.”

He paused for a second.

“I mean, when I was here with him, that was when I first had the thoughts and the visions of what this could be,” Jackson continued. “Keanon and I are friends still to this day, but you know, he’s moved on. And I don’t want to be like, OK, I have to ride off his success to be something. I’m proud of him as my friend for what he did. I’m glad we got the chance to work together. But this is me now. He’s not here. He’s in Nebraska. He’s got nothing to do with this anymore.”