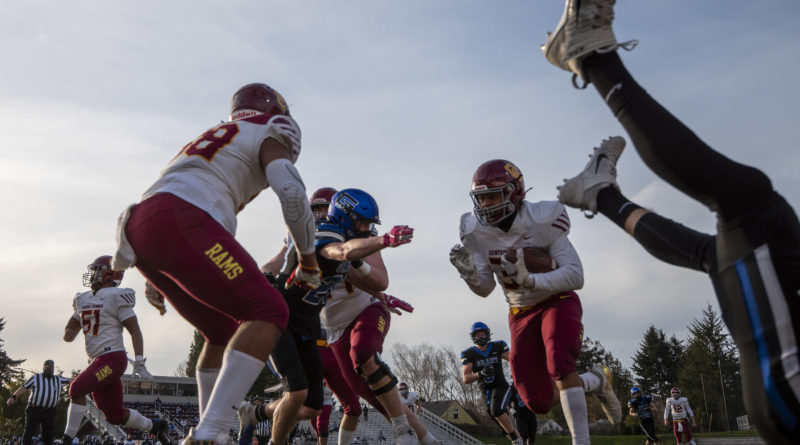 Central Catholic entered the season as a known unknown.

The Rams graduated a deep senior class that led the program to a Class 6A state championship, but while many players were entering the starting lineup for the first time, very few people figured it would take Central Catholic long to reload.

Sure enough, two-thirds through the season, the Rams have the look of another future state title contender. They defeated reigning PIL champion Grant 35-21 on Saturday evening at Franklin High School in Southeast Portland, taking control in the second half to remain undefeated at 4-0.

“We really didn’t have the mindset that we had to prove anything,” said junior quarterback Luke Johnson, who was 17 of 27 for 295 yards and four touchdowns with one interception. “Because everyone here knows what we can do, what we were capable of. If we’d had a full season, everyone would have seen what our mindset was, that we were still where we were.”

If anything, the Rams might be even more dangerous this season offensively. Last season, they had four or five main weapons they relied upon each week, but this year, Johnson finds himself like the proverbial kid in the candy store, with myriad skill players at his disposal.

“That’s exactly how it feels,” he said. “I’ve got so many receivers, running backs — they’re all great players. We’ve only got nine seniors, so we’re going to come back even better.”

Even Johnson is not immune to getting rotated out of the lineup to accommodate the Rams’ surplus of skill players. The second quarter belonged to freshman Cru Newman (4 of 5, 36 yards), one of 12 players who touched the ball on offense — and all but two will be coming back in the fall.

“It’s a nice thing to have,” Rams coach Steve Pyne said. “We preach being unselfish, and what happens is, kids come out knowing they’re not just going to be a blocker. They’re going to be involved, and you get their attention at practice. They’re into it a little bit more.

“Like we’ve been talking about, this is spring practice on steroids. We get to play six games, and we’re just trying to get as many games as we can.”

Grant coach John Beck used this season to not only get six games but to seek competition that he typically can’t schedule. The Generals have played a 2019 state semifinalist in Barlow, a perennial power in Clackamas and now the defending state champions — all in preparation for next week’s rivalry game against Jefferson.

“I’m hoping people realize that we’re not just an average PIL team,” Beck said. “We’re really not too shabby. Our thing is we’ll play anybody, anytime, anywhere, from any league. I think we’re good enough to play with everybody.”

And at times Saturday, the Generals showed they could compete in the same neighborhood as the Rams. They led 14-13 at halftime despite having just three first downs, scoring on a 93-yard kickoff return by JaeSean Pete and finishing the half with a 16-yard fumble return for a touchdown by Timon Davis.

For every big play the Generals made to stay close, though, Central Catholic seemingly had a counter that kept them at bay. That was never more true than early in the fourth quarter after Davis jumped an in-route and returned the interception 45 yards before getting knocked out of bounds at the Rams 10.

“Jack is a special player, and he made plays all night long,” Pyne said of the senior, the lone returning full-time starter on defense who had four sacks Saturday. “He’s been in big games and understands how to play in these games, and this was a big one for him. He lives in the neighborhood, so he wanted to show up.”

Beck could only shake his head recalling the game-changing turn of events that went against his team.

Neither team has scheduled a culminating-week opponent. The Rams take on Mt. Hood Conference rival Clackamas next Saturday, and many fans would love to see them square off with West Linn in an unofficial state championship game the following week.

Pyne shrugged off such talk.

“I don’t know if anybody in their right mind right now wants to play West Linn,” he said. “We have Clackamas next, and that’s all my focus is going to be on.”

If the match does get made for the Lions and Rams to play, Johnson would love to take his shot at SBLive Oregon’s Class 6A No. 1 team.

The Rams opened Saturday’s game as if they were going to make quick work of the Generals. They took the opening kickoff and went 72 yards in seven plays, with Gavin Jackson running one yard for a touchdown.

After forcing a quick three-and-out, Central Catholic was on the move again, this time needing eight plays to go 74 yards, with Johnson escaping the pass rush to find Jackson in the left flat for an eight-yard score.

That’s when Pete brought the Grant sideline back to life, escaping trouble to get to the left sideline, then breaking a tackle at the Rams 30 before cutting back inside for the score.

The Generals took the lead just before halftime after Max von Arx forced Johnson into his one big mistake of the night. Johnson tried to hit his outlet receiver but instead bounced it backward into the path of Davis, who scooped it up and snuck into the end zone as the clock hit triple-zeroes.

“For lack of a better term, that was a boneheaded mistake on Luke’s part,” Pyne said. “But there wasn’t any panic or stress on the sideline at halftime. Our kids regrouped.”

Johnson certainly looked unfazed by the mistake, leading two third-quarter scoring drives as the Rams reestablished control. He tossed touchdown passes of 16 yards to Riley Williams and five yards to Jalen Ridgeway as the Rams built a 28-14 lead with 3:29 left in the quarter.

“I wasn’t going to let it bother me, so it wasn’t going to bother my teammates,” Johnson said. “They knew we were good. We just had a couple of mental errors that first half, but other than that, we were playing Central football and doing what we do.”

As dynamic as the Rams offense looked in amassing 440 yards Saturday, Pyne praised his defense for its often-overlooked play. Through four weeks, the defense has allowed three touchdowns, with Grant scoring the third with 39 seconds remaining.

Just like the offense, many players had a role in nearly pitching a defensive shutout. Fifteen players recorded at least one tackle, 11 of whom will be back in five months for the start of fall practice.

“Our defense is playing lights out,” Pyne said. “Part of our scheme is with our outside backers, you don’t know if they’re a box defender or a pass defender, and so, it’s confusing. It confuses us at practice. Our defensive staff is doing a great job getting us ready every week.”

The Rams especially forced the Generals to abandon their running game, as standout backs Donald Stephens and Pete combined for 15 yards on seven carries.

That allowed Central Catholic to get pressure on Going, sacking him five times and hurrying him into several misfires.

“We didn’t sustain our drives. We didn’t get a run game going to take the pressure off the passing game,” Beck said. “You know, last week against Clackamas (a 19-12 loss) was another tough battle. We had our chances, and sometimes, they just made a great play. That’s just the way it goes sometimes.”