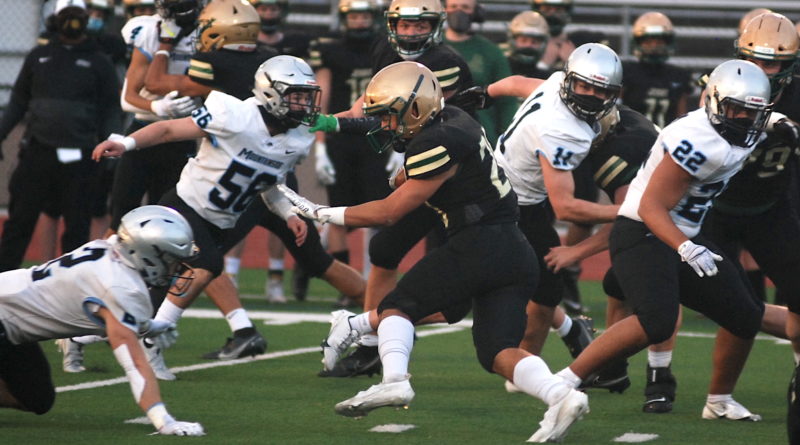 BEAVERTON — After an ankle injury knocked him out early in the third quarter, Jesuit’s leading rusher, Michael Rincon, knew he had to get back in the game somehow.

The Crusaders needed their primary running back if they were to avoid losing three of their first four games of this spring season — not something the powerhouse high school football program is used to doing.

“Some guy came through and clipped my ankle, and I felt it pop,” Rincon said. “It kind of scared me more than anything. I just asked the trainer to tape me up so I can go back in … because the team needed me.”

Rincon convinced the trainers and coaches to let him return late in the fourth quarter to test his ankle. Then, the junior looked unstoppable with a 24-yard touchdown run to help No. 9 Jesuit knock off No. 8 Mountainside, 21-14, in overtime Friday night at Jesuit High School.

It capped an incredible performance by Rincon, who finished with 32 carries for 208 yards despite missing most of the second half.

Rincon said he was determined to score, and he felt like he couldn’t get tackled after bouncing off several Mountainside defenders.

“The line did their job at first,” he said. “I had to do my job and broke a few tackles. Seemed like I couldn’t really get brought down there.”

Jesuit coach Ken Potter said it was a great performance from a “very tough kid.”

“He said, ‘I think I can go on it,’” Potter said. “And evidently he could because that was a heck of a run in the overtime to score that touchdown.”

Mountainside, coming off a state quarterfinal appearance in 2019, was threatening to defeat Jesuit for the first time in its three-year history as a varsity program.

The Mavericks tied the score 14-14 when junior quarterback Brian Mannion found senior wide receiver Andrew Simpson on a 71-yard touchdown pass with 8:34 to go in the fourth quarter.

After forcing a three-and-out, Mountainside drove to Jesuit’s 28-yard line. But a sack and fumble ended the drive with 2:25 to play.

After Rincon gave Jesuit the lead in overtime, the Mavericks had their chance to tie the score again. But two negative plays plus two incompletions ended their shot.

“It stings,” said Simpson, who finished with six catches for 132 yards and two touchdowns, plus two interceptions on defense. “Obviously, it was a great game. It just stings we couldn’t come out on top.”

Mountainside coach John Mannion called it an “excellent game” from both sides. Despite falling to 0-3 against Jesuit, the Mavericks have inched closer each time. In 2018, they fell 56-7 in their first season. In 2019, they lost 28-3 before sending this season’s matchup to overtime.

“We tell our guys the identity of our program the last three years is to be scrappers,” Mannion said. “I thought we did that tonight. Unfortunately, we came up a little short.

“Credit to Jesuit. They’re a good program for a reason. We came into this league and obviously, they’re the ones running our league. From three years to the last two and this year, we’re narrowing the gap, and it’s a big challenge.”

Jesuit junior Tyree Blake scored twice — the first on a two-yard run to give the Crusaders a 7-0 lead in the first quarter. His second score came on a four-yard run with 8:57 to go in the fourth quarter for a 14-7 advantage.

Jesuit (2-2) evened its record after a “big wake-up call” in last week’s 26-7 loss to Sherwood at home, according to Rincon.

With two games left on the six-game schedule and no postseason to play for this season, Potter said it’s important to get a look at his younger players in time for the fall. Because of Rincon’s injury, Jesuit played two freshmen in its backfield with quarterback Matt Irwin and running back Lonnie Burt for most of the second half.

Irwin had some bright moments. He finished 5 of 14 for 57 yards and three interceptions. Burt had 16 carries for 83 yards.

The Mavericks (2-2) were led by Brian Mannion, who was 15 of 26 for 203 yards with two touchdowns and an interception.

Potter had high praise for Mountainside’s program and how the coaching staff has built it up in such short time.

“They went to the state quarterfinals, so they’re doing better than all the other 6A teams in the state except for four, so they’re pretty good,” Potter said. “I’m impressed with John Mannion because he’s an excellent coach, so I’m not surprised by where they are.”