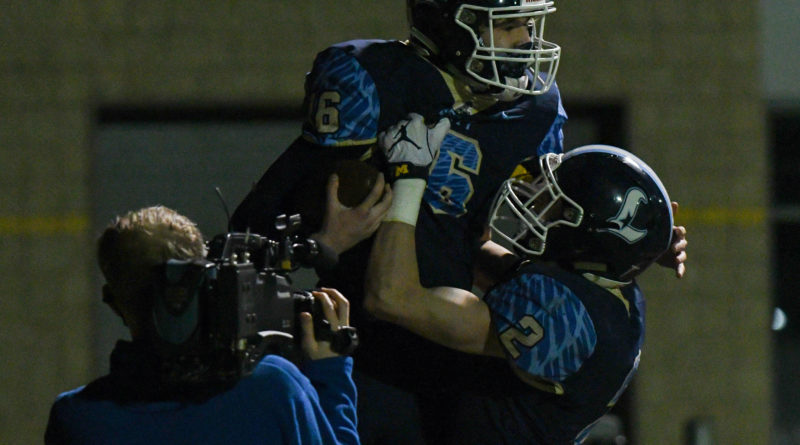 There were huge plays on offense and game-changing efforts on defense.

As time was running short, there was a clutch, improvised last-minute touchdown run.

And, when it was all over, the Liberty football team was celebrating its first win of the season.

The Falcons, with junior quarterback Hiro Diamond scoring on an 18-yard scramble with 35.9 seconds left, came away with a 32-28 victory over previously unbeaten Century in a chaotic Pacific Conference contest Friday at Liberty High School.

“Tonight was pretty much your perfect high school football game,” an emotionally exhausted Diamond said. “It was a fun one to watch, and a fun one to play in. We were battling on both sides of the ball. Lots of credit to Century — they played hard, too.”

“It was a battle. It was fun,” said Liberty junior Ethan Jones, who had two touchdown receptions and a fumble return for another score. “It means a lot, especially doing it at home, in front of friends and family — it’s amazing. This was very fun, the funnest game of my high school career.”

“This was huge. They’re our rivals, and all of the seniors wanted it,” said Liberty sophomore Nathan Smith, who ran for a team-high 58 yards and had an interception on defense. “We don’t have a lot of seniors, so we had to step up for them.”

With the victory, Liberty improved to 1-3 in Pacific Conference play and 1-3 overall, putting the Falcons in a tie with Glencoe and McMinnville for fourth place in the conference standings.

“With this being the first win of the season, against the district rival, it was just a great family team experience for us,” Diamond said. “Throughout the week, working together, even with a bunch of injuries, really meant a lot to us, especially after starting off 0-3. Sometimes, people get out of it. They’re like, ‘Oh, we’re 0-3,’ and they start questioning themselves. But tonight cleared some stuff up.”

“It’s surreal,” Jones said. “We lost three games, but we played as team for this one. We had a hard week of practice, and we just clicked tonight.”

Century, which went 2-8 in 2019, moved to 2-1 in Pacific Conference games and 3-1 for the season, putting the Jaguars in a tie with Sherwood for second place in the conference standings.

“We’ve had a bad history here. We just wanted to come out and have a good season,” said Century junior Tyler Mahlman, a converted quarterback who had 124 receiving yards and two touchdowns Friday. “With the COVID, and everything, we just want to make the most of what we have.”

“Our coaches have been great,” said Century senior quarterback Zach Boehler, who passed for 161 yards and ran for 95 more. “They’ve been coaching us up every week. We’ve worked our butts off every practice. We all bought into this one thing, and we’re going to keep on working to progress to the end of the season.”

Friday’s game between the Hillsboro School District rivals featured a bit of everything. There were six scoring plays of 20 or more yards, four interceptions, three fumble recoveries, a blocked punt and two lead changes in the final 2:53.

Liberty struck first in the battle. The Falcons, in their first possession, moved 65 yards in 13 plays, capping the drive with a 24-yard touchdown pass from Diamond to Jones, who made a diving, juggling catch in the back left corner of the end zone, grabbing the ball right before it hit the ground and right before he went out of bounds.

“It was a great pass from my quarterback,” Jones said. “I juggled it, put it on my leg, and got it.”

Jones’ touchdown catch, along with junior Kane McNabb’s extra-point kick, gave the Falcons a 7-0 lead with 30.1 seconds left in the first quarter.

Liberty’s next touchdown was set up, and then scored, by an unlikely source. Vincent Cabezudo, who wasn’t listed on the Falcons’ varsity roster but whose name could be found on the freshman roster, where he was listed at 5-foot-6, 125 pounds, ran 35 yards on an inside counter, setting up his six-yard touchdown run on a jet sweep to the left side, making the score 13-0 with 3:56 remaining in the second quarter.

Century battled back before the intermission. Boehler scored on a 23-yard run with 1:08 left in the period, trimming the margin to 13-7 at halftime.

Liberty answered to open the second half. In the first possession of the third quarter, the Falcons moved 60 yards in 11 plays, ending the drive with a 14-yard touchdown toss from Diamond to Jones, making the score 19-7 with 7:02 left in the period.

“I did a little curl route, caught it, juked the defender and went to the end zone,” Jones said.

Liberty quickly had a chance to add to its lead, as Falcons junior Xavier Cherney-Womack recovered a Century fumble on the ensuing kickoff. But, on the very next play, Mahlman made a leaping interception of a deep pass in the end zone.

That seemed to give the Jaguars the spark they needed.

Five plays after the turnover, Boehler threw a quick pass to Mahlman, who was running a slant from the left side. Mahlman caught the ball in stride and took off into open field, sprinting to the end zone to complete a 62-yard catch-and-run touchdown, cutting the Liberty lead to 19-13 with 4:23 remaining in the third quarter.

“I used to play quarterback, so, going to receiver, I’m just doing whatever I can for the team, helping out,” Mahlman said. “Breaking one of those plays is what I want to do to try and help us win the game.”

Century seemed to gain even more momentum as, after the Jaguars defense forced Liberty into a three-and-out, Century senior lineman Brody Reese smashed his way through the line to block a Falcons punt. From there, runs by sophomore Elijah Garcia, senior Emilio Hernandez and Boehler moved the ball to the Falcons 14-yard line. But then there was another big — no, huge — momentum swing.

On the next play, Liberty senior linebacker Padraic Perez stripped the ball from a Century runner. Jones grabbed the ball in the air and sprinted the other way for an 88-yard touchdown return, upping the margin to 25-13 with 0:50 left in the third quarter.

“My linebacker stripped the ball, I saw it, got it, and went to the end zone,” Jones said. “I was in shock. I was just very happy.”

The third-quarter fireworks weren’t over yet. On the final play of the period, Hernandez scored on a 54-yard run. The touchdown cut Liberty’s lead to 25-20, setting up the dramatic fourth quarter.

With 7:25 left, Century senior lineman Cayson Hammer gave his team a chance to take the lead, as he recovered a Liberty fumble at the Jaguars 46-yard line. Century took advantage of the opportunity.

Boehler completed an 11-yard pass to Mahlman, and he had a nine-yard toss to junior receiver Brendan Parrish. That set up a 25-yard touchdown pass from Boehler to Mahlman, who made a leaping catch in the middle of the end zone. Boehler added a two-point conversion run, giving the Jaguars their first lead, 28-25, with 2:53 remaining.

But Liberty was anything but discouraged.

“Honestly, as soon they crossed the goal line, I was thinking, ‘They left us too much time,’” Diamond said. “There was too much time left on the clock. We were confident.”

“We just needed the ball back,” Smith said. “We were 100-percent sure we were going to score.”

In what turned out to be the winning drive, Diamond connected with receiver Ronaldo Alfaro for pass completions of 15, 18 and nine yards, helping move the ball to the Century 18-yard line, where the Falcons faced second-and-2 with less than a minute to play.

From there, Diamond dropped back to pass again. But he stepped up in the pocket, saw an opening, and sprinted to his right. He didn’t stop until he got into the end zone for an 18-yard touchdown, giving Liberty a 32-28 lead with 35.9 seconds left.

“It was kind of a busted play,” Diamond said with a smile. “We meant to throw the ball, but we had a missed signal, and I scrambled out, read the blockers, and I was able to get in. It kind of felt surreal, almost. We were just set on driving, play after play, and all of a sudden, we had that opening. It was a great feeling.”

“It was a busted play. What he did was insane,” Smith said of Diamond. “He takes big hits, and he’s only like 160 pounds.”

“That sealed the game,” Jones said. “We were beyond happy after that play.”

Actually, the game wasn’t quite sealed yet. But Century, hampered by an intentional grounding call, wasn’t able to get a first down in its final, hurried late-game possession, leaving Liberty with the wild 32-28 victory.

“This felt great,” Diamond said. “It was a great, solid team win.”

“It’s huge. We’ve had a lot of injuries this year, and that’s been tough on us. It was really good to come out and get this,” Smith said. “The key was our defense. We gave up some big plays, but we always stepped up and got some turnovers.”

Diamond completed 12 of 15 pass attempts for 144 yards, with two touchdowns and one interception. He rushed for 56 yards on 15 carries.

Smith led the balanced Liberty rushing attack with 58 yards on 14 carries. He had four catches for 40 yards. The elusive Cabezudo had 54 rushing yards on four attempts.

Alfaro had three catches, all coming in the Falcons’ winning drive, for 41 yards. Jones had two grabs for 38 yards and two touchdowns. Senior Trevor Carr had two receptions for 22 yards.

“It was execution. We just didn’t execute,” Boehler said. “It’s a tough loss for us, against a hometown rival, but, hey, we’ve got to keep our heads up.”

Mahlman had six catches for 124 yards and two touchdowns.

Hernandez rushed for a game-high 109 yards on 13 carries. Garcia had 39 yards on eight attempts.

Century ran for 243 yards on 37 carries behind the blocking of linemen Reese, senior Daunte Powell, senior Va’atausili Tofaeono, junior Trent Bond and Hammer, among others.

“It was all about our line, and just sticking together as a team,” Boehler said of the key to the Jaguars’ rally. “That’s what brought us back.”

“It was pretty fun, but it sucks to be that close and lose, but they got the best of us, and that’s all I can say,” Boehler said.

“It sucks in the end,” Mahlman said. “A loss never feels good, but it was a good football game.”