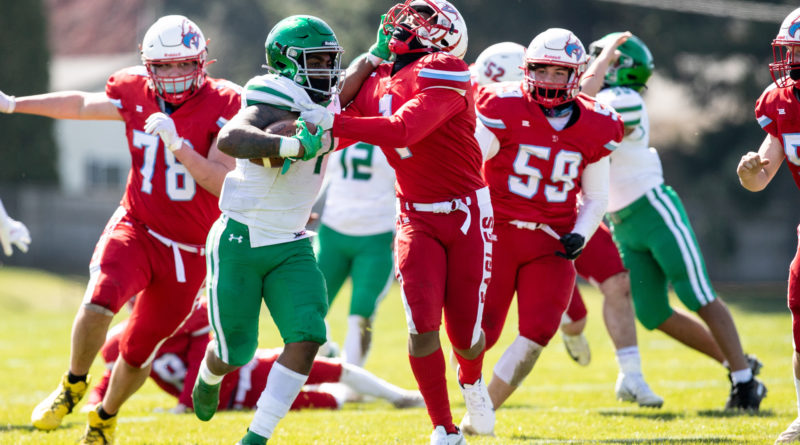 Reynolds vs. Centennial photo by Howard Lao for The Oregonian/OregonLive

Grant’s JaeSean Pete returned a kickoff 96 yards for a touchdown and Timon Davis returned a fumble 20 yards for a score as the first half ended, but the Rams (4-0) hit their stride in the second half and defeated the host Generals at Franklin High School in Southeast Portland.

A short touchdown run by Gavin Jackson put the Rams of Southeast Portland on the board, and he took a pass down the sideline for another score and a 13-0 lead with 2:53 left in the first quarter.

On the subsequent kickoff, Pete caught the ball and bolted down the left side of the field to bring the Generals (2-2) within six points. On the final snap of the second quarter, Central Catholic lost possession on what might have been an attempted pass, but the ball traveled backward and Davis scooped it up and ran it in to put the Generals of Northeast Portland up 14-13.

In the second half, Luke Johnson passed to Riley Williams, Zach Grisham and Jalen Ridgeway for touchdowns as the Rams dominated possession.

The Generals’ Davis added an offensive touchdown and had an interception that he almost returned for a score.

Zander Garner connected with Isaiah Rickard on two touchdown passes and the host Lightning exploited turnovers by the Roughriders (1-3) to remain undefeated.

Rickard had two interceptions, and teammate Rye Storrs intercepted a pass and returned a fumble for a touchdown to seal the victory for the Lightning (4-0).

Roosevelt defensive back TJ Jackson made two interceptions as part of a unit that kept the game competitive. Lineman Sosiua Taumoeanga was in on several big stops for the Roughriders, who also got strong play from defensive end Nathan Horsey.

The Lightning have doubled their win total from the previous two seasons combined. They last had as many as four wins in a season in 2017, when they made the OSAA Class 6A playoffs.

Justius Lowe ran for two scores and was among four players who scored touchdowns for the Cardinals in the win over the host Warriors (0-4) of Southeast Portland.

Yamato Uptegrove returned the opening kickoff 85 yards for a touchdown, Cyle Calcagno passed for two touchdowns, and the Bruins (2-2) posted their first shutout since 2018 in the victory over the visiting Gophers (1-3) in an all-Gresham matchup.

The Bruins rode a power running game and gained more than 350 yards of total offense compared with 44 for the Gophers.

Jack Nehler, a senior linebacker for the Gophers, made 13 unassisted tackles and assisted on six others. He also had one tackle for loss. Senior cornerback Lucas Simmons had an interception.

Miles Wilson rushed for 204 yards and three touchdowns, Emmanuel Igbonagwam added 74 yards rushing with two scores, and the Raiders (2-1) of Troutdale fought off the host Eagles (0-1) in Gresham.

Brendan Lynch also ran for a touchdown, and Angelo Martinez had two fumble recoveries for Reynolds. The Raiders also scored on a safety.

Centennial was making its season debut. The Eagles’ delay in playing tackle football was related to the school’s lack of in-person instruction while Multnomah County was deemed as having extreme/high risk for COVID-19.

Jordan Fisher ran for a touchdown in the third quarter, Rayan Mahin kicked the extra point, and the Wildcats denied a two-point conversion attempt from the 17-yard line with 1:33 left to protect their lead and defeat the host Democrats (2-2) of North Portland.

After Damir Collins’ four-yard touchdown run pulled the Democrats within 7-6, Jefferson was penalized for unsportsmanlike conduct, pushing the conversion try from the 2 to the 17. On the conversion attempt, quarterback Dondrae Fair rolled left and connected with Collins, but he was angled out of bounds short of the end zone.

The Wildcats’ Drew Bennett covered the Democrats’ onside kick, forcing Jefferson to exhaust its timeouts on defense during Westview’s next possession.

Although the Democrats forced Westview to punt with 23 seconds left, Jefferson muffed the punt. The Wildcats (2-2) of Northwest Portland recovered the ball and ran out the clock.

Jaxon Pullen scored four touchdowns and the Riverhawks’ defense kept the visiting Trojans (1-3) of Southwest Portland bottled up in the shutout victory.

Pullen scored on runs of 33, 20 and 51 yards. He also caught a 10-yard touchdown pass from Skyler Leeson, who scored a touchdown of his own on a one-yard quarterback sneak for The Dalles (2-1).

Vikings quarterback Tanner Steele was 12 of 24 for 176 yards with two touchdowns, but the host Hawks (2-2) won on the strength of three successful two-point conversion attempts.

Vale’s John Wolfe had four catches for 67 yards and a touchdown. Steele, who threw one interception, gained 77 yards rushing.

Whereas La Pine was perfect on conversions, the Vikings (1-3) were 0 for 3, missing an extra-point kick and both two-point attempts.