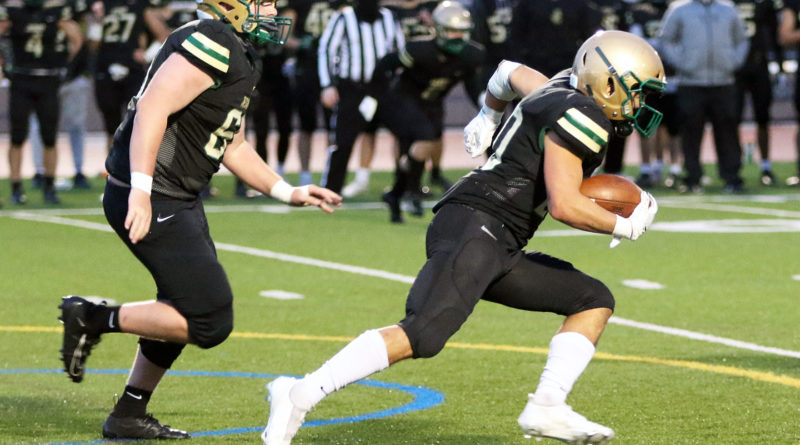 No. 9 Jesuit 21, No. 8 Mountainside 14 (OT): Michael Rincon’s 24-yard touchdown run lifted the Crusaders (2-2) in overtime against the visiting Mavericks (2-2) at Cronin Field in Southwest Portland.

After Rincon’s touchdown, Jesuit’s defense held on Mountainside’s possession, securing the victory in the game between Metro League rivals.

The second Brian Mannion-to-Andrew Simpson touchdown connection, with about 8½ minutes left in the fourth quarter, pulled the Mavericks into a 14-14 tie.

The Crusaders had gone ahead 14-7 on the preceding possession on Tyree Blake’s second touchdown run.

The teams went into halftime with the score 7-7, Jesuit scoring first on Blake’s first-quarter touchdown.

Simpson had two interceptions for Mountainside of Beaverton, the first of which he returned to set up a short field and led to his first scoring catch from Mannion. Landon Sherman and Bowen Stinson had 12 tackles apiece for the Mavericks.

Rincon had 30 carries for a season-high 222 yards. Jesuit amassed 317 yards on the ground.

The Mavericks’ offense was a stark contrast. Simpson finished with six receptions for 133 yards as Mannion (16 of 26) passed for 214 yards.