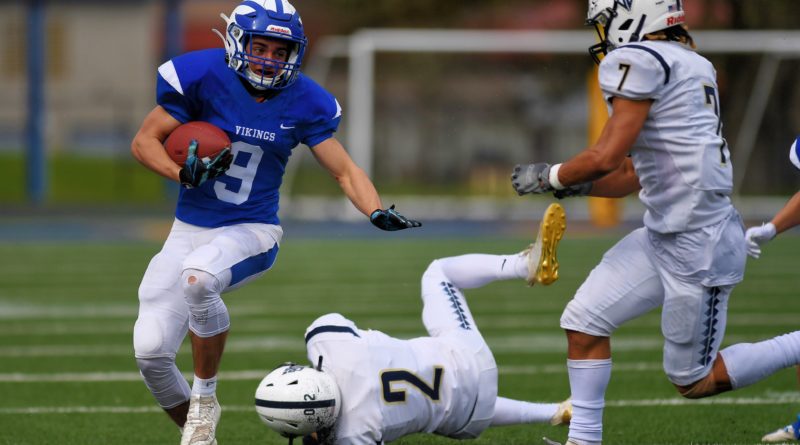 The Democrats piled up 402 yards of total offense and forced five turnovers in defeating the visiting Roughriders in an all-North Portland matchup.

Trejon Williams contributed in all facets of the game for the Democrats (2-1). He scored one touchdown on a 72-yard punt return and another on a 37-yard reception. He had six tackles, two sacks, a forced fumble, a fumble recovery and an interception.

Sakari Haynes had a long touchdown and DJ Rosemon had a fumble recovery touchdown for Roosevelt (1-2), which lost starting quarterback Imarion Kelly with a shoulder injury in the second quarter.

Dawson Coder also had an interception for a Gophers defense that allowed 65 yards of total offense. Gresham’s Caden Brewington and Austin Stalwick each had a fumble recovery.

Parkrose assistant Spencer Mayhew identified several players who made strong contributions, including Cunningham with his running and Ty Delgado on both sides of the line, especially with some big stops on defense. Keviante Hill contributed in all three phases of the game, and Michael Scott made an impact with abundant tackles.

The Storm (2-1) of northwest Bend scored on a kickoff return, a safety and an interception return in defeating the visiting Beavers (0-3) at Sprague High School in Salem.

Koffi Kouame’s 13-yard run put Beaverton up 6-0 midway through the first quarter. After the Storm went ahead 9-6, Ryan Mendiola recovered a fumble in the end zone for a 13-9 Beavers lead.

Summit scored the next 21 points, taking a 30-13 lead four minutes into the fourth quarter.

The visiting Cardinals (2-1) built a 14-0 lead and never trailed in defeating the host Trojans (1-2) in a game pitting Southwest Portland schools.

Sophomore Parker Feld-Gore threw touchdown passes to Jayden Brannan and Davis Dufort late in the second quarter to make the score 14-12. The Cardinals increased their lead to nine, 21-12, with a long touchdown pass on a rollout on the last play of the half.

Feld-Gore completed a third touchdown pass, this one to Cole Thomas, to bring the Trojans within 21-18 late in the fourth, and the Cardinals tacked on an insurance score in the final minute.

The three touchdown passes are a career high for Feld-Gore.

The host Lightning of Southeast Portland posted their third consecutive victory to open the season with the win over the Senators (1-2) of Northeast Portland at Jefferson High School in North Portland.

Quarterback Zander Garner passed for a touchdown and ran for another, and Joel Beltran had a rushing touchdown and a scoring catch.

Samuel Coleman and Payton Lambert caught touchdown passes from Brogan Biggerstaff, and the Buckaroos (3-0) continued to display strong defense in the win over the visiting Eagles (2-1).

Pendleton is allowing an average of six points per game. Hood River Valley entered having scored 52 points in its first two games. Kyle Liscom was the Buckaroos’ leading tackler with eight solo stops, five assisted tackles and one tackle for loss.

The Buckaroos’ Tyasin Burns gained 134 yards on 17 carries, and Lambert closed the scoring with a six-yard run in the third quarter.

After trailing 13-0 at halftime, the Eagles closed to 13-6 in the third quarter before Pendleton created more breathing room.

The Vikings (3-0) of Klamath Falls posted their third consecutive shutout with the win over Banks (2-1) at Cottage Grove High School in a matchup formed at the 11th hour when the teams’ original opponents were unable to play because of COVID-19 issues.

Mazama’s first touchdown came when, on fourth down, Tristan Lee dropped back, shuffled to his left and threw across his body, hitting Cole Brosterhous at the goal line for a 25-yard scoring pass with less than three minutes left in the first quarter. Brosterhous leapt and beat his defender for the ball.

Mazama took a 16-0 lead into halftime after Lee ran for a score and pulled away after the break on Lee’s scoring pass to Erik Hayden and two touchdown runs by Aidan Kindt.

According to social media posts, the victory was the 100th in the career of Mazama coach Vic Lease.

Junior quarterback Dom Montiel passed for four touchdowns and ran for another, pacing the host Pirates of Coos Bay in the win over the Tigers (1-2) at Crook County High School in Prineville.

Montiel was 12 of 24 for 278 yards with no interceptions. Saturday’s game was the second in a row in which he threw for four touchdowns.

“Marshfield’s solid all the way around, very athletic,” Simmons said in a text message. “Just got outmatched, but the kids never stopped competing.”

Nick Frith kicked a 27-yard field goal with less than 10 seconds left to cap the comeback victory by the Eagles (1-2), who trailed the Bulldogs 21-7 in the first half.

The Bulldogs built their lead on two scoring runs by Cole Beyer and a touchdown pass from Jordan Blem to Tomás Veliz.

The Eagles pulled to 21-14 just before halftime on a touchdown run by Easton Hughes (30-plus carries, 150-plus yards). The second of two Eli Brown-to-Frith touchdown passes made the score 21-21 late in the third.

Eagles coach Randy Nyquist was clear about the importance of the defense, which held the Bulldogs scoreless after halftime and allowed the team to come back.

“The defense did a really good job,” Nyquist said.

Srnowski (9.5) and Higgins (nine) were the Hornets’ leading tacklers.