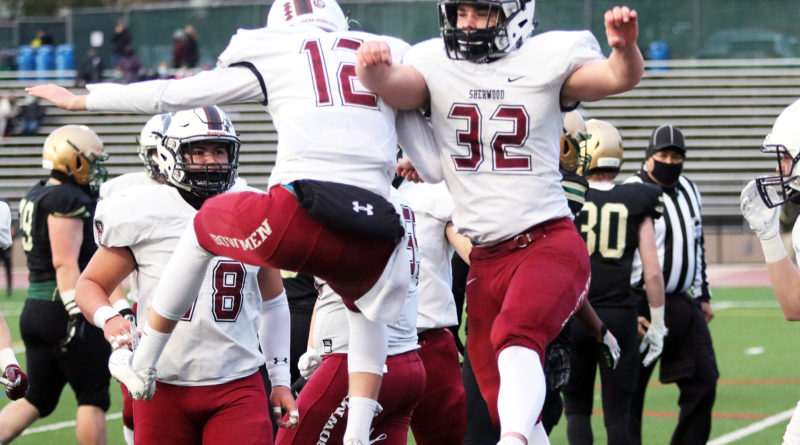 It’s not complicated. Run the ball with power, and play hard-hitting, physical defense.

But, the Sherwood football team feels that when it plays its brand of football as well as it can, then it’s awfully tough to beat. The Bowmen likely made believers out of Jesuit.

Sherwood, rushing for 266 yards on 39 carries and playing smash-mouth, ball-hawking defense, powered its way to a 26-7 win over the perennial powerhouse Crusaders in a nonleague battle Friday at Jesuit High School.

“I think it is a great win for us, especially since this is the first time that our varsity is playing Jesuit, beating them at their home field. We came together as a team,” said Sherwood senior running back Tai Stormont, who rushed for 145 yards and two touchdowns. “We talked all week about how it was going to be a game of physicality. And we came out and we were more physical. That’s the Sherwood game. We come out and we want to ground and pound and hit people all day. We want to be known as a hard-hitting team, and I think we showed that today.”

“It’s huge,” Sherwood senior linebacker Jacob Williams said of the win. “Jesuit is one of the top teams in the state, and it’s just awesome to come out here and beat them like this.”

“Man, this was the biggest game of the year. We had this circled on our schedule forever,” said Bowmen senior Jacob Pollock, who had a huge performance, with an 81-yard touchdown reception on offense and a couple of interceptions on defense. “We wanted to come out here, two ground-and-pound teams, and we wanted to see how much better we’ve gotten since last year. And I think this game, honestly, was just an amazing game. It was the game of the year for us.”

It was the second consecutive decisive victory for the Bowmen (2-1) after they dropped their season-opener, 14-9, at Newberg on March 5.

“It was definitely motivation,” Williams said of that loss. “I don’t know what happened with Newberg, but we just banded together, worked hard and, you can see, it paid off.”

“That Newberg game, I think that fired us up more than anything could have,” Stormont said. “That was super sad, losing to Newberg the way we did, but I think that got us fired up for the rest of the season. I can’t wait for these next three games.”

“The score didn’t turn out like we wanted it to be, but I thought that everyone gave 100-percent effort,” said Jesuit junior running back Michael Rincon, who rushed for 126 yards. “We just left it all out on the field.”

“We let them get a bunch of big plays, and those big plays hurt us a lot,” said junior tight end Spencer McKelligon, who scored the Crusaders’ touchdown. “But I think that score doesn’t reflect how hard we played.”

Sherwood especially seemed to shine on defense, helping force four turnovers and getting two second-half fouth-down stops. The Bowmen also got a blocked punt by Williams.

And that defense was put to the test as, near the midway point of the second quarter, senior linebacker Bryan Cuthbertson, the reigning Pacific Conference defensive player of the year, left the game with an elbow injury. As the Bowmen were meeting during halftime, Cuthbertson and his father, James Cuthbertson, left Jesuit High School to go get his elbow checked.

But instead of putting their heads down, the Bowmen seemed to turn up their intensity in the second half while playing without their defensive leader.

“Bryan is definitely the heart and soul of our defense,” Pollock said. “We see it in practice every day, him flying around, and we see him in games, flying around, and to lose him is a big strike to us, but you see (junior linebacker) Seth Glenn come in. And I told him when he came in, ‘Let’s see what you’ve got,’ because I see it in practice every day, and he played his butt off, and it was fun to watch.

“Our ‘D’ was locked down,” Stormont said. “Even after losing Bryan, Seth Glenn came in and filled in for him perfectly. Defense wins championships, and I believe that’s how it was tonight.”

While the Sherwood defense was solid throughout the contest, it was the Bowmen offensive attack that made a strong first impression. In the game’s opening possession, Sherwood moved the ball 68 yards in six plays, all runs, capping the drive with a 7-yard touchdown run by Stormont, giving the Bowmen a 6-0 lead with 9:43 left in the first quarter.

“That felt great to be able to come out and punch them in the mouth like we did,” Stormont said with a smile.

Pollock helped set the defensive tone for the night, coming up with his first interception on Jesuit’s ensuing possession.

Stormont found the end zone again, this time on a 46-yard run. Senior Clay Peden added a 2-point conversion run, giving the Bowmen a 14-0 advantage with 8:17 remaining in the second quarter.

Jesuit answered. A 20-yard pass from Crusaders junior quarterback Tatum Lewis to sophomore running back Noah Staley helped set up a 16-yard scoring toss from Lewis to McKelligon, who made a jumping grab while cutting to the left side of the end zone, trimming the Sherwood lead to 14-7 with 4:37 remaining in the half.

“That felt good. It felt like a momentum swing, but it wasn’t enough to get us the ‘W,’” McKelligon said of the touchdown. “It was a great play call, and our quarterback made a great read, and our blockers made a great effort to show run, and the pass was right there.”

Jesuit threatened again, moving the ball into Sherwood territory in the final minute of the half. But the Bowmen forced a punt, which was blocked by Williams, securing Sherwood’s 14-7 halftime advantage.

Jesuit, mainly behind the running of Rincon, put together a long, time-consuming drive to open the third quarter. But that drive, which reached the Bowmen 7-yard line, ended with a third-down interception by Glenn.

Sherwood struck again late in the third quarter. Pollock, after catching a quick pass over the middle from junior quarterback Bjorn Bergstrom, broke into the clear and sprinted to the end zone, completing an 81-yard play which gave the Bowmen a 20-7 lead with 1:32 left in the period.

“We were talking about it in the second quarter,” Pollock said of the play. “I was on an outside-release slant, and (the defensive back) was playing a little inside on me. I stepped up, caught it, and I was cramping a little bit, but I was just running as fast as I could.”

“We really stepped up,” Williams said. “We’ve been practicing hard all week. It’s tough when No. 55 went down, but we stepped up and kept playing hard.”

“You get two really big juggernaut teams who really want to impose their will, and you get to see who wants it more, and who gets it done in the trenches,” Pollock said. “They’re a great, competitive team, and we knew that coming in, but I have to give hats off to our linebackers, who kept filling holes, and our D-linemen, who kept getting off blocks. It was a great game to watch.”

Pollock, in addition to his touchdown catch and two interceptions, also forced a fumble, which was recovered by Sherwood senior cornerback Quinn Corsetti.

“I put a lot of work in this offseason,” Pollock said. “It almost brings me to tears. I’ve worked my butt off for this, and to see it come full circle like this, it’s emotional. It’s the biggest game I’ve had in my career.”

Running behind the Bowmen offensive line of senior Noah Culbertson, senior Sam Shayegi, senior Hunter Christensen, Cuthbertson (before his injury) and senior Jeffrey Manning, among others, Stormont picked up his 145 rushing yards on 16 carries. Peden added 112 yards on 14 carries.

“This was probably the most fun football game I’ve ever been a part of, and I only played about three quarters of it,” Stormont said.

Bergstrom completed 1 of 4 pass attempts for 81 yards and a touchdown. Williams had a sack to go with his blocked punt.

For Jesuit, Rincon picked up his 126 rushing yards on 27 carries.

“The holes were there,” Rincon said. “We were just led by ‘The Franchise,’ which is our linemen.”

Lewis completed 4 of 10 pass attempts for 86 yards and a touchdown, and he rushed for 22 yards on four carries before leaving the game with an injury early in the third quarter. Jesuit freshman quarterback Matt Irwin completed 3 of 16 passes for 26 yards.

Rincon had two catches for 52 yards. McKelligon had two receptions for 27 yards. Staley, senior Darius Mims and sophomore Ben Lewis each had one catch for the Crusaders.

For the Jesuit defense, McKelligon had two sacks and a forced fumble. Senior James Lewis had two tackles for losses.

“They just got a few big plays,” Rincon said. “We’re just going to come back on Monday and work hard to get better.”

“It didn’t go as planned, but I’m sure, next week, we’ll bounce back and get the ‘W,’” McKelligon said.

Jesuit will be back in action Friday, March 26, when it plays host to Mountainside at 7 p.m. That will be the Crusaders’ first Metro League game this season.

Sherwood, which is 1-1 in Pacific Conference play, will be home March 26 to face Glencoe in a conference contest starting at 7:30 p.m.

“Newberg, they studied us, and we got out there and kind of got smacked in the mouth a little bit. But we came back as a group, and we talked, and ever since then we’ve been full steam ahead,” Pollock said. “We want to power through the rest of these games and really just see how good we are. We want this type of performance every week.”