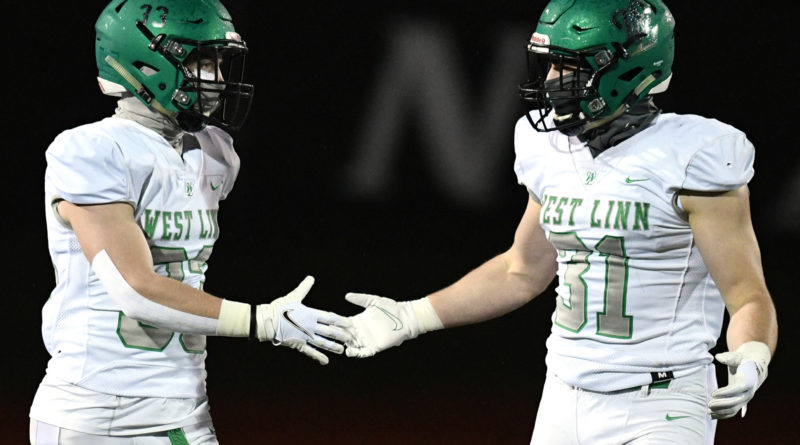 Many season goals were taken off the table for the West Linn football team when the OSAA decided not to hold a state championship during the shortened spring season.

One very big goal, though, remained circled on the Lions’ calendar.

It had been 4½ years since they’d walked off the field victorious against Three Rivers League rival Tigard. That streak ended Friday night with an emphatic 35-15 win at Tigard’s Douglass Memorial Field, something the seniors took great pleasure in celebrating.

“We lost to them the last three years, so we wanted to come back for revenge,” said senior Gavin Haines, who ran for 105 yards and two touchdowns and made three tackles for loss at linebacker. “We respect them. They’re a good team, got some good players, but we needed this win this year.

The Lions’ large senior contingent made sure the youngsters on the team got the message that enough was enough when it came to losing to their Three Rivers League rivals.

“They really wanted to beat these guys,” said sophomore linebacker Earl Ingle, who had six tackles and one of the team’s three sacks of Tigard quarterback Zach Chesler. “They had their names on the wall all year based off last year (a 42-21 loss). We wanted to come out and compete with them, and we did that tonight.”

While the Lions, ranked No. 1 in the SBLive Oregon 6A media poll, sport 26 seniors on their roster, the Tigers have just nine senior banners hanging from the north end of the stadium — one being for injured lineman Edward Beglaryan, out for the season with a torn ACL.

When senior running back Hewitt Sullivan left the game early in the second quarter with an undisclosed injury, it left Chesler surrounded by much of the future of Tigard football the rest of the game — skill players such as junior receiver Keenan Speer-Johnson, junior tight end Elijah Jackman, sophomore receiver AJ Perez and sophomore running back Konner Grant.

“We’re really young, and it’s great to be playing quality opponents like this,” Tigers coach John Kemper said. “They’re getting kind of thrown into the fire a little bit and making some mistakes on the run, but that’s how we get better.”

The teams reversed roles a bit to start the game. West Linn took the opening kickoff and marched 60 yards in 12 plays, converting on fourth down near midfield and eventually scoring on Haines’ 4-yard run midway through the quarter.

Tigard needed just one play to respond, with Sullivan bursting through a hole between right guard Matt Studer and tackle Zechariah Schwab to go 74 yards untouched to draw the Tigers to within 7-6 after a blocked extra point.

That’s when the Tigers’ youth betrayed them. On the first play following the kickoff, they broke the huddle with just 10 players, leaving Lions receiver Clay Masters all alone on the right sideline.

“Whatever play we had called, I saw no corner covering me, so I just looked over at Blake (DeBisschop) and put my hand up,” Masters said, smiling as he recalled the play.

As the 11th Tiger sprinted onto the field from the opposite sideline, the Lions quickly snapped the ball and DeBisschop tossed it to Masters in the right flat, with the senior racing 63 yards to the end zone for a third touchdown in 29 seconds.

“I’m thinking, ‘I gotta get going. I can’t let them catch me on this one — I gotta score,’” Masters said. “We let in our first points of the year, so you gotta rally the troops, and there’s no better way to do it than in one play, get a passing touchdown from 60 yards out.”

The big plays kept coming for the Lions the rest of the game. Masters added a second long touchdown catch in the second quarter to put them up 21-6, and Haines broke off a 45-yard scoring run midway through the third for a 28-9 lead.

Finally, sophomore Mark Hamper answered a 10½-minute Tigard scoring drive by turning a short crossing route into an 80-yard touchdown jaunt with 6:45 to play, escaping traffic to get down the left sideline.

“This win means the world to us,” Masters said. “Like Coach (Chris) Miller said, nothing after today is guaranteed. We need to come out and play every single game like it could be our last high school game ever. If something goes wrong and we have to shut down for two weeks, that’s the rest of our season.”

The Tigers, meanwhile, can take plenty of positives out of the night. Besides posting the first points given up by West Linn’s No. 1 defense this season, there was that 10½-minute drive that traversed 86 yards in 17 plays, including two third-down and two fourth-down conversions.

The drive showcased Chesler, a senior who played quarterback as a freshman but moved to receiver the past two seasons while Drew Carter ran the show. With Carter now at Colorado, Chesler (headed to the Naval Academy in the fall) moved back under center, beat out a couple of younger players for the job, and displayed his athleticism throughout the night — especially on this drive, when he went 7 for 7 for 73 yards.

Grant broke off several tough runs, and Speer-Johnson showed his elusiveness with four catches for 49 yards, including an 18-yard touchdown off a perfectly executed tunnel screen.

“I’m an O-lineman, so I want to run the football, play-action people, take our shots when they’re given to us and control tempo, whether we want to go fast or slow,” Kemper said. “We knew where there were some pockets where we could get guys open, but we had some protection breakdowns, not getting the time needed to get the ball there, and that’s a credit to West Linn.

“We’ve got some guys. We’re just young. We’re getting some guys some reps, and we’ll see where we are in the fall, see what we can build and develop.”