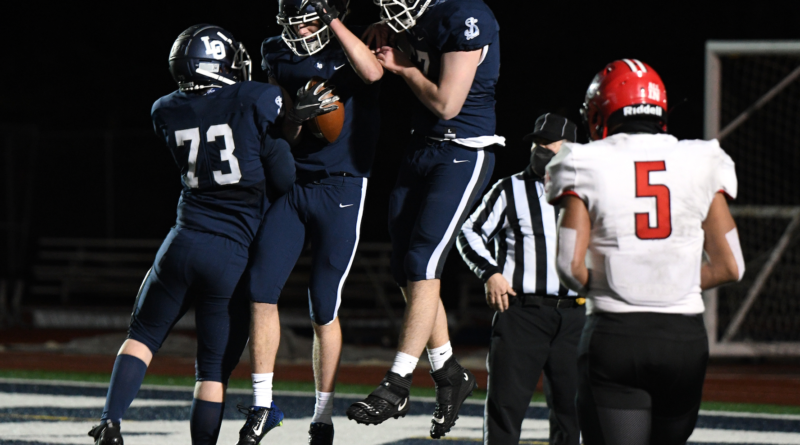 LAKE OSWEGO — For the past two Friday nights, Lake Oswego’s players and coaches sat anxiously at their homes while most of the state’s football teams kicked off their seasons.

The Lakers’ first two games were canceled after a COVID-19 outbreak at the school, which spread to athletes in several sports. Games and practices were called off.

Until it was safe to practice and play again, they had to wait for their time under the bright lights.

“I just sat at my house and watched all the games (online),” junior quarterback Jack Layne said. “It just built a fire in my belly and all my teammates’.”

For Lake Oswego coach Steve Coury, it was even more difficult.

“I couldn’t even watch it,” said Coury, entering his 29th season. “I sat at home and didn’t know what to do.”

In their first game since the Class 6A state title game 458 days earlier, the Lakers didn’t miss a beat. Looking in midseason form as a championship contender, Lake Oswego used a dominant second-half performance to knock off Oregon City, 42-20, on Friday night at Lake Oswego High School.

“I know our kids were tired of practice,” Coury said. “I don’t blame them, so it was fun to be out there and I thought it was a real clean game for our first game.”

The Lakers were powered by their three-headed rushing attack of junior Gabe Olvera, sophomore Calvin Macy and senior Zach Mahan. The trio combined for 330 yards on 32 attempts and five touchdowns.

“It’s a credit to our coaching staff, to how they coach and the way our guys step up,” Layne said. “I feel like every year, we have guys that no one knows about that step up in big games. That’s just what we do. That’s just the LO culture.”

Olvera said each of them brings something different to the table, which makes them dangerous.

“Me and Zach, we’re the power backs back there,” said Olvera, who led with 138 yards on 11 carries with three touchdowns. He added three catches for 64 yards.

“(Mahan) runs down the middle with force and I’m on the side. Calvin’s up next and he’s going to be really good.”

The big question for Lake Oswego was how it would replace Casey Filkins, a two-time Class 6A offensive player of the year who guided the program to back-to-back state championship games. With Olvera, Macy and Mahan, the Lakers appear to be in good hands.

“I don’t think you ever replace a guy like Filkins,” Coury said. “But those three guys did a nice job tonight, for sure.”

Olvera and Mahan scored twice in the first quarter to give Lake Oswego a 14-0 lead. Oregon City didn’t quit and responded when senior quarterback Trey Martin found junior Joseph Shaw for a 13-yard score in the second quarter.

Martin connected with senior Jahleel Heath on a 16-yard touchdown to cut the Lakers’ lead to 14-13 with 3:06 left in the half.

“We got really excited because we made a big-time play against a big-time team,” said Heath, who led the Pioneers with eight catches for 139 yards. “But we have to be calm, cool and collected. … The second half kind of went downhill for us.”

Olvera answered with a 13-yard touchdown run to give Lake Oswego a 21-13 lead at halftime.

It was all Lakers after that. Olvera scored again on an 11-yard run zig-zagging through Oregon City’s defense. Macy turned the game into a rout with a 79-yard run to increase Lake Oswego’s lead to 35-13 with 4:39 to go in the third.

Mahan scored again on a 1-yard run to open the fourth quarter.

“We got ahead and (Oregon City) had to scramble to get back in it,” Coury said. “We made it a little tough on them in the end, but I thought they played well.”

The Pioneers got their final score on a 3-yard run by senior Logan West Peyton.

For the Pioneers (0-3), they believe they’re a team on the “up and up” and starting to gain respect around the state, according to Heath.

“When teams saw Oregon City on the schedule, it was, ‘Oh, easy win,’” Heath said. “But now I feel like every single night, teams have to game plan and say it’s going to be a battle.

“You can’t walk over us. They were up 14-0 and then we came back and could’ve tied the game. That shows a lot.”

For the Lakers, Mahan had 16 carries for 75 yards and two touchdowns. Senior Garett Roach had three catches for 45 yards, and junior Dylan Layne had four receptions for 41 yards. Jack Layne finished 11 of 21 for 141 yards.

Lake Oswego (1-0) has three games left, including against powerhouse West Linn next. From dealing with the coronavirus outbreak to seeing games canceled, Jack Layne said the team is ready to move on and finish strong with what’s left of the season.

“It was a big shot to the chest, for sure, for our whole team,” Layne said. “We’ve been working hard since last summer, but again, everyone is facing adversity. I’m happy we showed up tonight.”