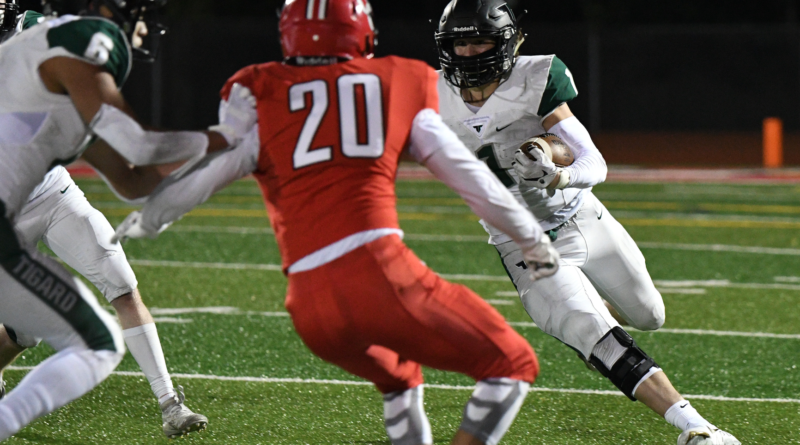 There were plenty of big smiles on the faces of the victorious Tigers. But the biggest smile likely belonged to senior receiver/defensive back Spencer Kuffel as he was being congratulated over and over by his teammates and coaches.

“This was really fun, yeah,” a joyous Kuffel said after the Tigers’ season-opening 34-16 win over Oregon City in Friday’s Three Rivers League contest. “It was great to get back out there.”

For Kuffel, a three-sport standout at Tigard, Friday’s game was his first action in competition in a long, long time.

Kuffel made his first mark in varsity competition at Tigard during his freshman track and field season, when he qualified to compete in the high jump at the Class 6A state championships. He took ninth at the state meet with a height of 6 feet, 0 inches, helping the Tigers boys take second place in the team standings.

During his sophomore football season, Kuffel received plenty of action at defensive back, earning all-Three Rivers League honorable mention for a Tigers squad that went 10-2 and reached the quarterfinal round of the Class 6A state playoffs.

But Kuffel didn’t get to play in that quarterfinal game. His season came to a painful halt Oct. 19, 2018, during the Tigers’ 23-21 win at West Linn. In that game, Kuffel tore the anterior cruciate ligament in his right knee.

During the 2018-19 winter season, Kuffel was listed on the Tigard boys basketball varsity roster, but he didn’t play that season. He also missed the 2019 spring season and a chance to return to the Class 6A track and field state championships.

Going into the summer of 2019, Kuffel was getting ready to return to the football field. But those plans went awry. During a summer 7-on-7 football competition, Kuffel again tore the ACL in his right knee.

Following that second injury, Kuffel missed his junior football season. During the 2019-20 basketball season, Kuffel actually suited up for the Tigers for their Class 6A second-round state playoff game at Central Catholic, but he didn’t play in that game, and Tigard fell 58-43 to the Rams.

Kuffel was looking to return to the Tigard track and field team last spring, but that didn’t happen.

“I missed everything last year,” Kuffel said. “I was going to do track, but COVID.”

Missing nearly two years of competition because of two devastating knee injuries, as well as the COVID-19 pandemic, would likely discourage most athletes — but not Kuffel. In fact, it was just the opposite.

“It was motivation. The first (knee injury) definitely was,” Kuffel said. “The second one, there was a good amount of time I thought I wasn’t going to play football again. I mean, two times, the same sport, the same leg, but I missed it so much — I just kind of needed it.”

The motivated Kuffel rehabbed his knee, getting ready for his senior season. Of course, the COVID-19 pandemic threatened to wipe away that season before it even started.

“I was afraid I’d have my senior year taken away,” Kuffel said. “I got out and did a couple camps and combines in the fall, just to get my name out there a little bit, which I did. But I was just looking to get some actual film.”

And he wanted to play football.

Kuffel, likely more than anyone, was anxious to take the field. But he, and the rest of the Tigers, had to wait one more week, as their scheduled season-opener with Lake Oswego on March 5 was canceled because of a COVID-19 outbreak in the Lakers program.

“It was tough. It was really tough,” Kuffel said. “Once I heard the news, I didn’t really have much of a reaction, but that night, I really wanted to be out here.”

Last Friday, at Oregon City, Kuffel was finally going to get his chance to return to competition.

“I definitely was nervous,” Kuffel said with a laugh. “On the bus ride here I was definitely nervous, but once I got out here, it just felt really good.”

The rest is stuff storybooks are made of.

The first time the 6-foot-1, 195-pound Kuffel, sporting a brace on his right knee, touched the ball came on a 15-yard punt return less than two minutes into the game. Spencer Kuffel was back — and he was about to make a big, big impact in his return.

It was late in the second quarter and Tigard, behind two touchdowns by senior running back Hewitt Sullivan, was holding a 13-10 lead. But Oregon City, behind the passing of senior quarterback Trey Martin, was marching up the field. The Pioneers had a second-and-10 at the Tigard 21-yard line after Kuffel deflected a pass.

He did more than just deflect the next one. Seeing Oregon City set up a pass play toward the right side, Kuffel came sprinting over, intercepted the ball in stride and sprinted down the sideline, right in front of the Tigard bench, for an 85-yard touchdown return.

“I jumped it, and I was gone,” Kuffel said. “It was awesome, having open field, getting out and running.”

Kuffel wasn’t done. Late in the third quarter, he made a diving interception of a deflected pass at the Tigers 31-yard line. Then, midway through the fourth quarter, Kuffel tipped a Pioneers pass into the air and then grabbed the ball for his third interception, basically wrapping up the Tigard victory.

“I kind of hoped this would happen. I said that to my mom (Kennan Kuffel),” Spencer Kuffel said.

Kuffel had 105 return yards on his three interceptions. He also had a couple of punt returns for 34 yards. He had an 11-yard run on a jet sweep, and he booted a 47-yard punt.

“Spencer is a great help to our team,” Tigard senior quarterback Zachary Chesler said. “He’s an amazing athlete, and it’s big, big benefit to have him on the field.”

“He’s one of my best friends,” Sullivan said. “He’s come a long way — two ACL tears, that takes some courage to come out here and keep working like that.”